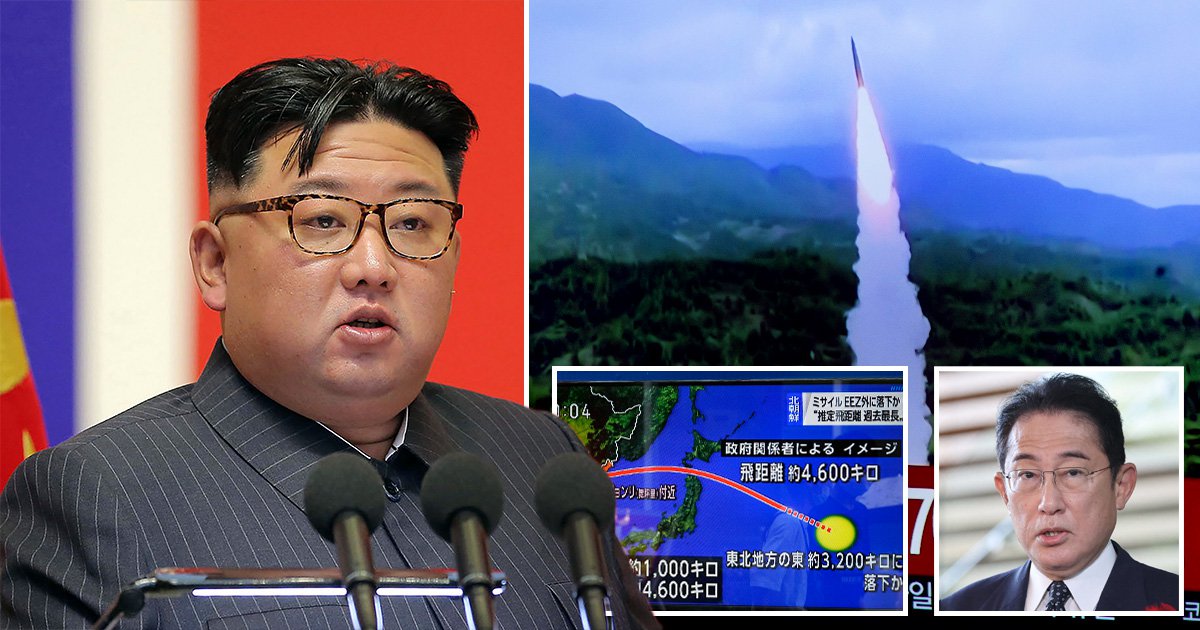 People in Japan were woken by the sound of air raid sirens today as the Government warned them to seek shelter from a North Korean missile flying overhead.

The authorities issued what is thought to be the first evacuation alert in five years in response to the launch and temporarily suspended trains.

North Korea has ramped up missile testing in recent weeks, but the early morning incident is thought to be the most significant since January – and will dramatically escalate tensions in the region.

The ballistic missile is believed to have landed in the Pacific Ocean and not injured anyone in the northerly island of Hokkaido and the north-eastern Aomori prefecture.

But locals were reportedly told: ‘North Korea appears to have launched a missile. Please evacuate into buildings or underground.’

Fumio Kishida added: ‘The firing, which followed a recent series of launches by North Korea, is a reckless act and I strongly condemn it’.

Residents in north-eastern regions were told to evacuate buildings, amid apparent fears of falling debris.

Trains were held in Japan’s Hokkaido and Aomori regions before operations were resumed after the government announced that the missile appeared to have landed in the Pacific.

Japanese chief cabinet secretary Hirokazu Matsuno said there were no immediate reports of damage and that the missile landed in waters outside the country’s exclusive economic zone following a 22-minute flight.

In January, King Jong-Un’s regime fired a Hwasong-12 intermediate-range missile capable of reaching the US territory of Guam, in a move also seen as hugely provocative.

South Korea’s Joint Chiefs of Staff said it also detected the launch of what it called a ballistic missile that was fired from the North’s northern inland area.

People in Seoul were pictured today nervously watching reports of developments in Japan.

The South Korean military has bolstered its surveillance and is maintaining its readiness in close coordination with the United States.

That places the US territory of Guam within striking distance of it.

He promised that the North’s ‘reckless nuclear provocations’ would be met sternly by the South and the broader international community.

The launch is the fifth round of weapons test by North Korea in the past 10 days.

That appears to be in response to military drills between South Korea and the United States, which North Korea claims to view as an invasion rehearsal.

North Korea has test-fired about 40 missiles over about 20 different launch events this year.

Supreme leader Kim has promised to expand his nuclear arsenal and is refusing to return to nuclear diplomacy with the United States.