It’s been nearly a month since the flames leaping from Notre Dame cathedral in Paris left the world aghast.

The cathedral’s 19th century spire collapsed into the church’s nave, irreparably piercing through the 850-year-old building, a landmark of Gothic architecture sitting in the heart of France’s capital.

It took several hours for hundreds of firefighters to quell the flames, which ignited during an evening mass on April 15 at the start of Holy Week, the busiest and most important period of the liturgical year. The cause of the blaze is still under investigation, though Paris prosecutor Remy Heitz has told reporters that it was “likely accidental.”

“Like all of our countrymen, I am sad tonight to see part of us burning,” French President Emmanuel Macron said on the day of the fire.

As millions mourned and wondered about what could be saved from the cathedral, World News Tonight anchor David Muir was the first television journalist allowed inside since the devastating fire, going inside the church with retired French General Jean-Louis Georgelin, who has been chosen by Macron to lead the restoration of the storied church. 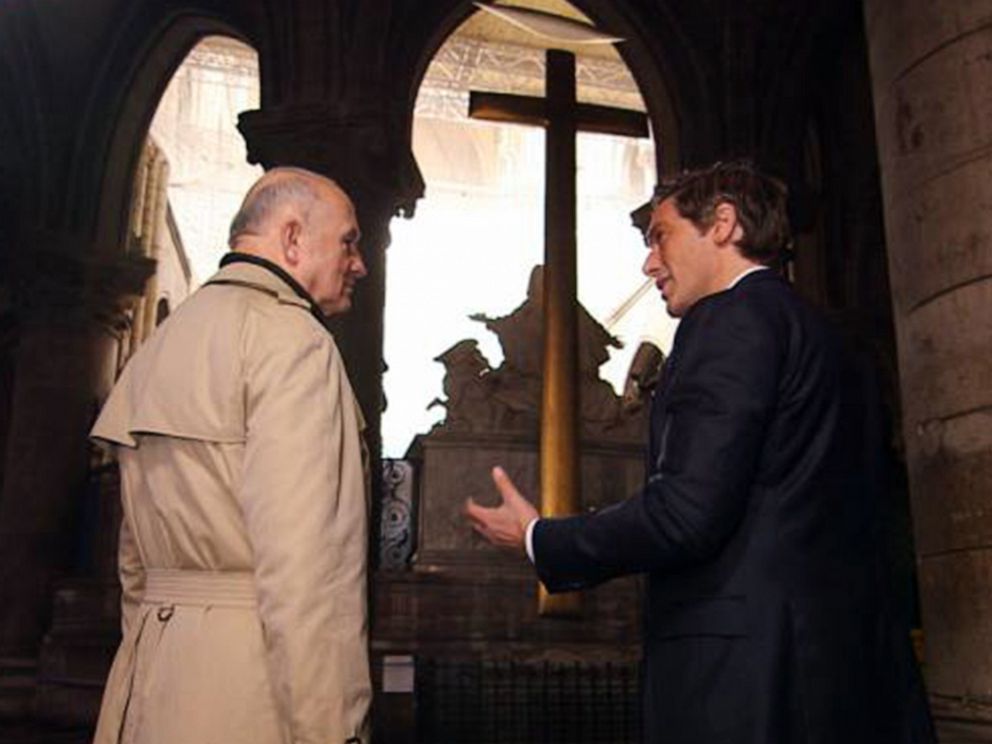 Georgelin is tasked with what some would say is the impossible – bringing back Notre Dame to life amid strife about how to rebuild the historic cathedral for centuries to come. 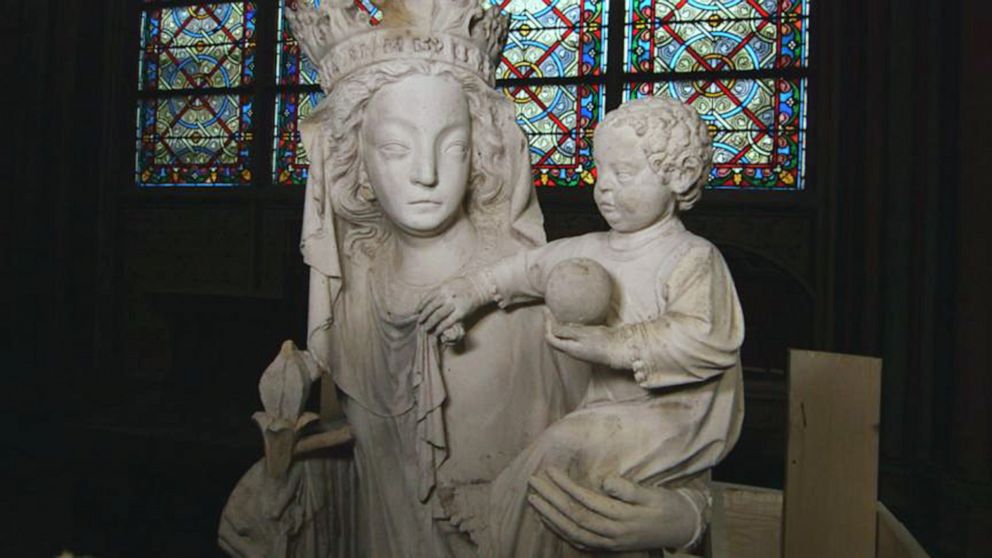 “Nothing is impossible to a French general,” Georgelin told Muir, saying he agrees with Macron that Notre Dame could reopen within five years.

Inside, the charred remnants of the collapsed spire still traverse the nave of the cathedral – two giant holes in the ceiling letting rain drops in, despite protective netting put in place to stop debris from falling into the church below.

The main altar was destroyed when the spire fell through the roof and brought in several tons of stone, wood and scaffolding that was being used for restoration before the fire. 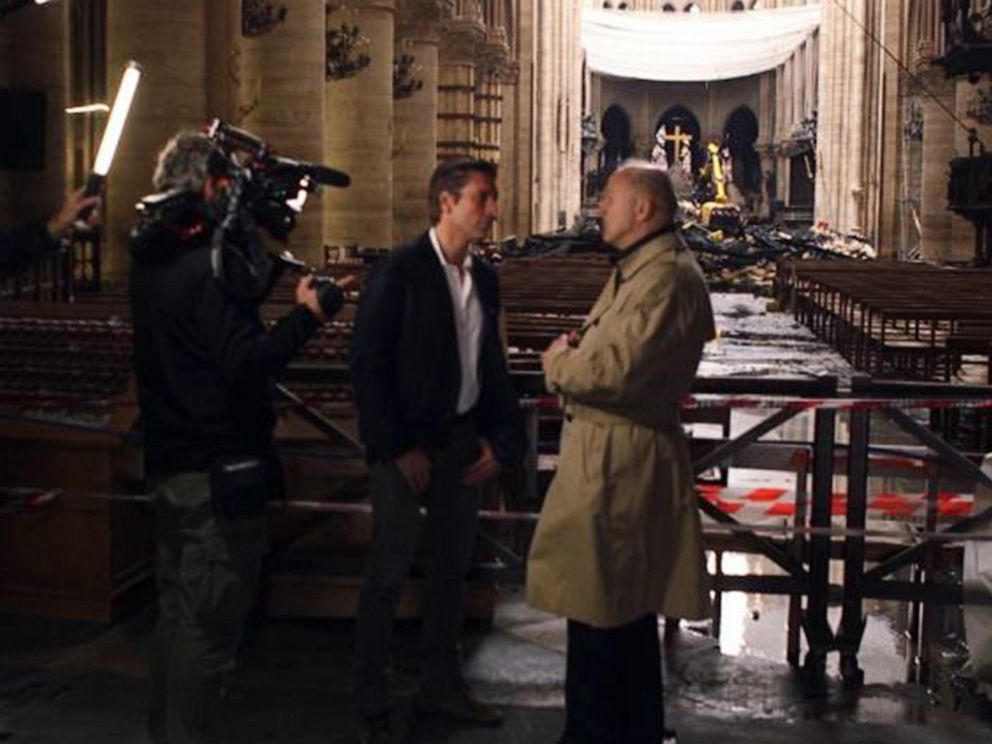 Now, stones that fell from the roof sit numbered on the ground. They will not be used to build a new roof, but the numbers signal where each stone fell from.

The fire, still under investigation, burned through nearly two thirds of the roof and about 400 tons of lead designed to keep the walls from collapsing in the medieval cathedral. Today, workers inside the church wear protective suits and masks to keep away from the lead and take blood tests to make sure their blood lead levels are still normal, Georgelin said.

The evening of the blaze, rescuers were intent on saving both the relics inside, which include what Catholics believe is the crown of thorns Jesus wore during the Passion, as well as Notre Dame’s great organ and its 8,000 pipes, along with the building itself. 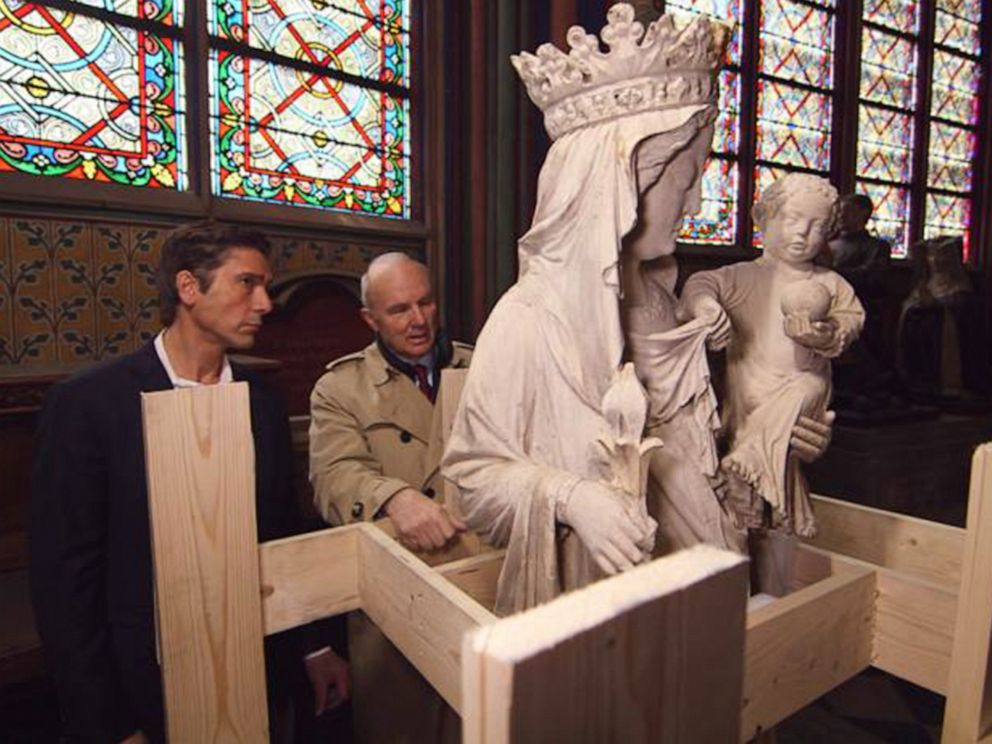 “It was a race against time because during the night at some time we were considering that the entire building could collapse, especially when the fire in the [hit] north tower,” Georgelin said.

The cathedral’s famous rose windows – 42 feet in diameter – survived intact. The cathedral’s organ did too, though it remains to be seen how water, soot and lead ash may have damaged the pipes.

“The organ hasn’t been touched by the flames but there is water, there is lead,” Georgelin told Muir. “We probably will have to remove it to repair it … Sometime we will hear it again, the organ of Notre Dame de Paris.” 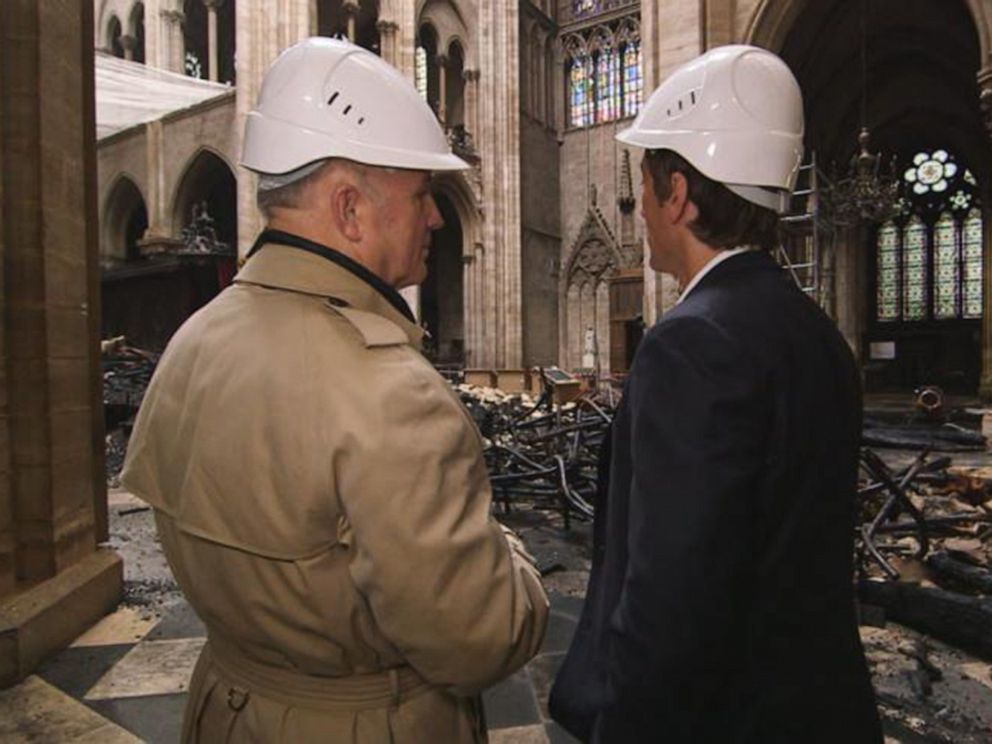 The music sheet set for Holy Week before the fire still remains above the organ’s keys.

Also saved: a 14th century statue of the Virgin Mary that remained unscathed by the flames. Muir was among the few to see at eye level since it was installed on a pillar in the choir centuries ago.

A few steps away, the general took Muir and the ABC News crew to the front of the cathedral, where the famous golden cross still stands behind Notre Dame’s historic altar and choir – an early sign of hope the day after the fire horrified millions. 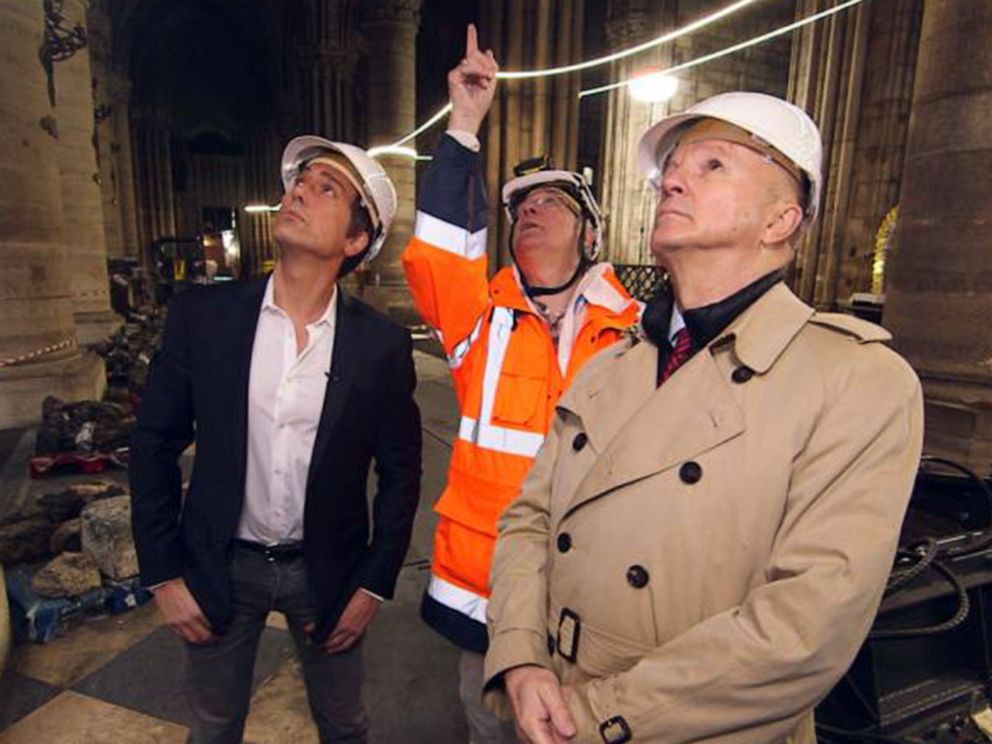 “The entire world saw the cross of god shining despite the the fire,” Georgelin told Muir.