NSW has recorded 1035 locally acquired cases up to 8pm on Friday, and one case in hotel quarantine, Health Minister Brad Hazzard said on Saturday.

Two people have died in hospital due to COVID-19. A woman in her 70s died at Nepean Hospital and a woman in her 80s at Westmead Hospital.

On Friday, NSW recorded a record number of vaccinations, with 156,165 people receiving the jab – more than 61,000 of those at vaccination hubs and the rest from GPs and pharmacies. 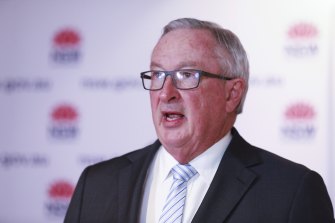 Mr Hazzard said that of 12.01am on Friday this coming week, couples who wish to marry will be able to with a maximum of five guests allowed to attend, “in addition to those obviously necessary for the actual service”.

Mr Hazzard said the fine print would be ironed out in the coming days.

He also addressed misinformation on social media regarding supposed negative effects of vaccinations on women wishing to have children.

Mr Hazzard said there was no medical evidence to support this, however there were risks for women wanting children if they did contract COVID-19.

The Herald reported on Saturday that hundreds of Sydney schools will remain closed for the rest of the year unless transmission rates fall in hotspots under strict safety conditions underpinning the government’s pledge to reopen classrooms from October 25.

Almost 200,000 school employees across the state will also need to be vaccinated from November 8 to keep their jobs, a policy that has come under fire from Christian schools which warn that up to 10 per cent of teachers will not obey the mandate.

Meanwhile, the NSW government is considering a plan to ban unvaccinated people from entering restaurants, bars and other hospitality venues once NSW begins opening up after reaching a 70 per cent vaccination rate, according to sources in the hospitality industry.

Consultation with industry groups is under way to discuss the option to require all hospitality staff and patrons to prove they have received two doses of a COVID-19 vaccine when NSW reopens.

The plan would include merging vaccination certificates and QR code check-ins on either the Service NSW app or a new federal government app.

From Saturday, authorised workers living within local government areas of concern must have a permit to leave their areas for employment.

But the fast approaching deadline for authorised workers in the 12 local government areas (LGA) of concern to get the jab has been pushed back from Monday to Friday, September 6, after unions and peak bodies pleaded with the government to ease the timeframe.

But those workers will no longer have the option to undergo rapid antigen testing instead of getting vaccinated after the NSW government made the late change to rules that were due to come into effect on August 30.

Border tensions between NSW and Queensland continue to simmer, with NSW Deputy Premier John Barilaro released a statement earlier this morning that contained several reasons why border checkpoints shouldn’t be moved south of the Tweed River.

Speaking to press just after 10am, Queensland Education Minister Grace Grace said she was hopeful a resolution between the two states would soon be reached.