Compared with last year’s summer of fires and heat, this year was marked by above-average rainfalls that resulted in NSW’s wettest summer in almost a decade.

While La Nina has passed its peak, the effects on the Australian climate are likely to remain, with parts of NSW expected to experience cooler-than-average autumn days. 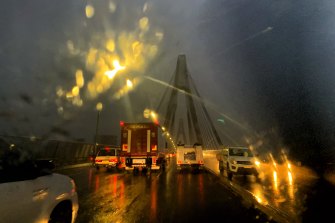 This summer was marked by above-average rainfalls resulting in the wettest summer in the state in almost a decade. Credit:Kieran Cahillane

“However, it is not uncommon for the effects of La Nina to still be felt as the event declines. That means an increased chance of above-average rainfall, particularly for eastern regions.”

“The maximum temperatures are expected to be around average for autumn, except for inland parts where we might see below-average temperatures.”

Across NSW, the summer rainfall for 2020-21 was 29 per cent above the 1961-1990 benchmark used by the Bureau of Meteorology at 215.7 millimetres, making it the state’s wettest summer since 2011-12. Much of the northeast of the state had its wettest December since national records began in 1900. Meanwhile, Sydney’s summer rainfall was about average.

Some areas across the state, including Thredbo Village, Mittagong and Oberon, experienced the highest summer total rainfall for at least 20 years, recording 457.6 millimetres, 434.8 millimetres and 360.9 millimetres respectively.

The NSW mean temperature for summer was 0.03 degrees above the 1961-1990 benchmark, making it the state’s coolest summer in nine years.

A temperature of 1.9 degrees was recorded in Thredbo on December 6 and 7 last year, the coldest of the season.

Nationally, the 2020-21 summer marked the wettest and coolest summer in at least five years, due to La Nina. December 2020 was the third wettest December since records started in 1900, the bureau’s climatologist Dr Andrew Watkins said.