Number of female paedophiles nearly DOUBLES in four years: Warning over 2,297 cases of abused children as ‘lack of understanding’ means women are less likely to be reported for crimes

The number of female paedophiles has almost doubled in four years as experts warn there is a ‘lack of understanding’ surrounding the abuse.

While the majority of convicted paedophiles in the UK are men, there were at least 2,297 reported cases of children being abused by women from 2015 and 2019, according to police figures.

In 2015 police forces in England and Wales recorded around 1,249 cases of female perpetrated child sexual abuse.

But by 2019 that figure had risen to 2,297, according to figures obtained using Freedom of Information laws by BBC Radio 4. 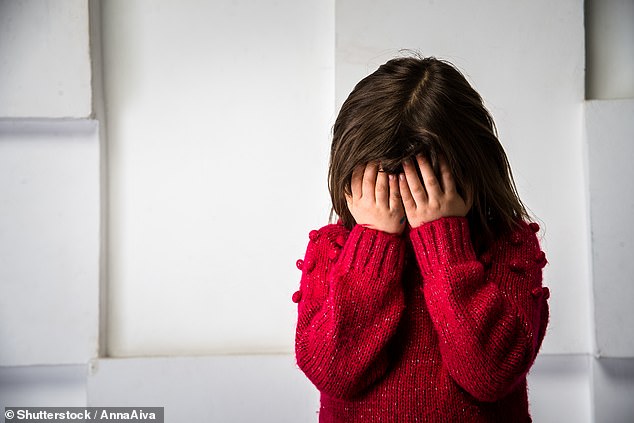 There were at least 2,297 reported cases of children being abused by women from 2015 and 2019, according to police figures (file photo)

Dr Andrea Darling, a criminology researcher at Durham University, told the BBC that the actual figures could be far higher as all child sexual abuse is typically underreported.

In addition, there is often a ‘lack of understanding’ surrounding female-perpetrated abuse.

She said: ‘That means that potentially abusive behaviour that may have been picked up if the perpetrator had been a male is explained away.

‘I’ve seen that consistently in my research.’

Campaigners also highlight that the surge in reported cases could also be in part down to victims having more confidence to come forward.

According to police reports, only 3.8% of all child sexual abusers were female between 2018 and 2019, figures from the Office of National Statistics show.

Further figures from the Ministry of Justice show of the 5,547 offenders found guilty of child sexual abuse in England and Wales in 2018, only 66 female abusers were convicted. 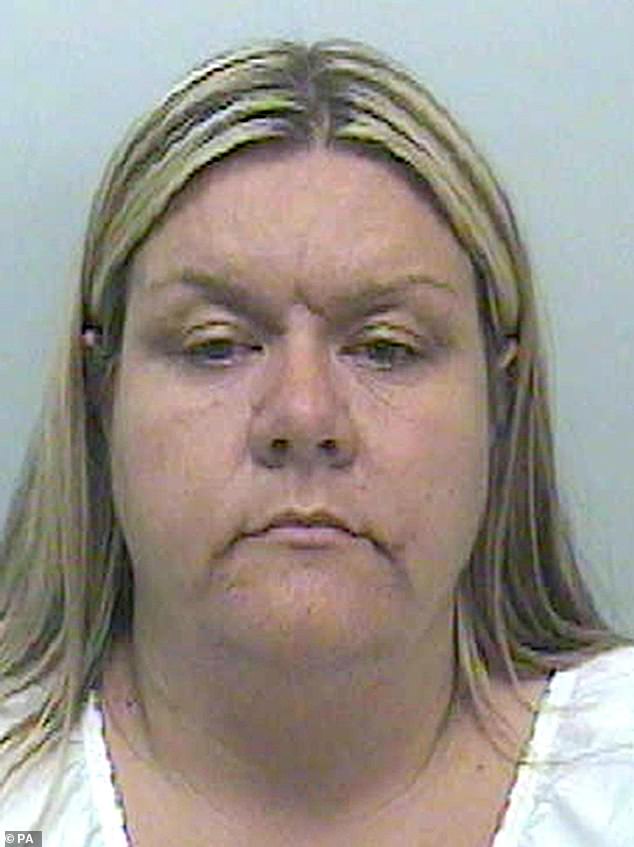 Vanessa George, 49, as seen in her police mugshot (pictured), was dubbed Britain’s worst female paedophile after sexually assaulting up to 64 children as young as two at a nursery in Plymouth

High profile cases of female child abusers over the years include Vanessa George.

She was dubbed Britain’s worst female paedophile after sexually assaulting up to 64 children as young as two at a nursery in Plymouth.

George was jailed for a minimum of seven years in 2009 after she filmed the abuse and sent it to other paedophiles.

Police discovered depraved Allen had not only shared images online but had also raped a three-year-old girl.

Allen, from Bulwell, near Nottingham, was sentenced in December 2009 after admitting four counts of sexual assault of a child, and one of distribution of indecent images of children. 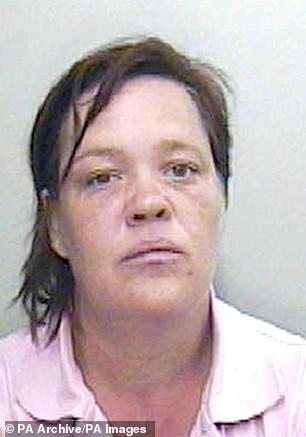 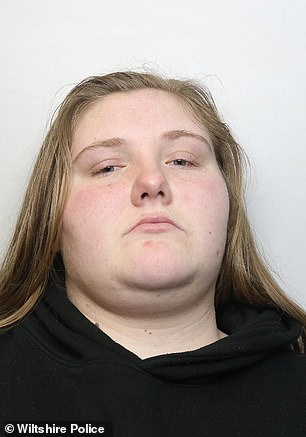 Angela Allen (pictured left) was one of four women who assaulted children and shared images in a paedophile ring, while nursery worker Sophie Elms was also convicted of child sex abuse

She was also freed from prison early last year after serving 10 years in jail.

Elms was only 17 when she committed offences against two young children aged just three and two years old. 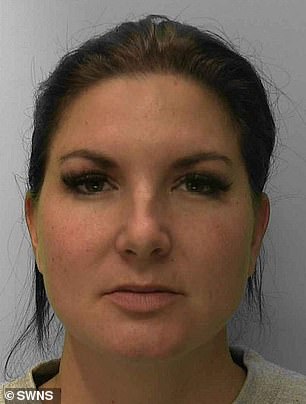 Christine Callaghan was paid £2,285 by another paedophile to livestream footage of herself sexually abusing a young girl over three years, a court heard

She pleaded guilty to the charges against her during her trial at Swindon Crown Court in 2019 and was sentenced to seven years and ten months in jail.

These included penetration, sexual assault, and taking and distributing indecent photographs of children.

Sick Christine Callaghan was also jailed for 12 years and four months in August in 2019 after she admitted four counts of child sexual abuse charges.

A court heard she was paid £2,285 by another paedophile to livestream footage of herself sexually abusing a young girl over three years.

She was paid to carry out the horrific acts by Dean Petley, 30, who admitted 11 charges and was jailed for eight years.

Peltey paid Little £750 so he could watch her assault two children.

Despite the rise in reported cases of female perpetrated child sexual abuse, the Freedom of Information data obtained by BBC’s File on 4 programme shows the gender split between male and female victims is roughly half.

Following their investigation, a Government spokesman said: ‘The government will not allow there to be any safe space for sex offenders to operate – either online or offline, male or female – and will do all we can to help survivors of abuse.

‘To this end, we will soon publish a first of its kind strategy to tackle all forms of child sexual abuse, including that perpetrated by female offenders.’

Who were the members of the Blanchard child sex abuse ring and where are they now?

The IT consultant, who was born in Liverpool in 1970, was the orchestrator of the ring and persuaded four women to commit crimes for him.

Blanchard, who was described by the judge at his trial as at ‘the hub of the paedophile wheel’, was handed an indeterminate sentence in 2011 for sex abuse charges and told he would serve a minimum of nine years.

During sentencing, Blanchard was described as a ‘Svengali’ figure at the centre of one of the ‘most sickening paedophile rings this country has ever seen’, as the he persuaded a string of middle-aged women he met on Facebook to abuse children for his sexual pleasure.

Police uncovered their activities only when Blanchard forgot to log out of his personal email account and his business partner spotted images of child abuse.

The discovery led detectives to Vanessa Allen, a former prostitute who traded pictures with Blanchard and George, shared stories of child rape and sent Blanchard photos of herself abusing a child.

In July 2019, it was revealed that Blanchard has been referred to the Parole Board to consider for release.

The 49-year-old, who abused dozens of babies and toddlers while working at Little Ted’s nursery in Plymouth, has been given a new taxpayer-funded flat after serving ten years in prison.

George, who is forbidden from returning to Devon or Cornwall, is believed to be still living somewhere in the Midlands.

George was jailed for a minimum of seven years in 2009 after she sexually assaulted up to 64 children as young as two before filming the abuse and sending it to other paedophiles.

In July, despite outrage from her victims’ parents and MPs, the Parole Board ordered her release after she’d served 10 years behind bars.

George, who lost three of her 19 stone in prison, convinced the board to release her after having treatment to boost her ‘self-esteem’. She was released from prison in September 2019.

Allen, from Bulwell, near Nottingham, was sentenced in December 2009 after admitting four counts of sexual assault of a child, and one of distribution of indecent images of children.

She started her life in Manchester but was taken into care in Nottingham in the early 1970s.

She spent time at a children’s home in the city which later found itself at the subject of abuse allegations by some former residents.

Allen was later moved to another home and spent time at two schools in the city Aspley, St Teresa’s Catholic Primary School and then Trinity School.

She became a prostitute and had some convictions for minor crimes. She first made contact with Colin Blanchard via a dating application on Facebook.

They began exchanging regular text messages, and he convinced her to sexually assault young children and share the images. Some of her messages included invitations to rape a child.

Allen, who raped a girl of three, has already served the five-year minimum of her sentence imposed at the same time. She was also freed from prison early last year after serving 10 years in jail.

Unlike the other women, Dawber actually met Blanchard and was in a year-long relationship with him.

After meeting online between autumn 2008 and spring 2009, Dawber and Blanchard exchanged thousands of messages – many containing extreme and explicit images of child abuse.

In 2008 Dawber allowed Blanchard, her boyfriend at the time, to take photographs of the abuse of the five month-old-girl on his mobile phone.

He went on to store these images on his home computer, as well as uploading them and sending them to the other women in his paedophile ring.

Community care worker Dawber, of Southport, was convicted sexual assault, arrangement or commission of a child sex offence and five offences of permitting an indecent image to be taken.

She was 44 when she was jailed for four years in 2010. She has since been released.

The mother-of-nine was 41 when she was jailed for seven years. She was jailed in 2011 and has since been released.