Nurse held hand of girl, 14, dying from Covid who ‘may have been saved’ if anti-vaxxer parents had 'let docs intubate'

A NURSE who held the hand of a teenage girl while she died from Covid said she “may have been saved” if her anti-vax parents had “let doctors intubate her”.

Jessica, a nurse practitioner in an intensive care unit, took to Twitter to air her frustrations after four patients died from Covid in one shift.

“Tonight I helplessly held the hand of and stroked the hair of a beautiful 14-year-old girl as she exited this world. She was looking forward to starting high school and eventually becoming a veterinarian. It was so senseless!” the Arizona State University alumna tweeted Saturday as @Jessicam6946.

“I truly believe she could have been saved if her parents had not forbidden us from intubating her. A free vaccination would have prevented it all! This little girl was robbed of her whole life and of fulfilling all of her dreams.”

She added the girl had been with them for nine days and had been able to communicate with staff until she took a “turn for the worse” the day before.

“About two hours later we were unable to save a 25-year-old mother of one who was 15 weeks pregnant,' the nurse continued. “She had refused the vaccines because of the lies about them causing infertility and harming her baby.

“Liars killed her, her baby, and robbed a two-year-old little boy of his mommy and sibling. Not to mention robbing a husband of his wife and child.”

“It was the first time since late March we have lost more than three Covid patients in a single shift,” she added. “Then we find out this morning a coworker had two of her tires cut in one of our employee parking lots overnight!

“Fortunately, security caught and was able to detain the a**hole until police arrived and took him into custody.”

Just days later the US reported more than 1,000 Covid deaths in a single day for the first time since March.

Tuesday saw 1,004 deaths with a seven-day rolling average of 710, which is a 159 percent increase over the last month and the highest number seen since April 20.

The number brings the total death toll from the pandemic to 623,329 people in the US, the highest number officially reported by any country in the world.

The South remains the epicenter of the latest outbreak, with Florida reporting a record of nearly 26,000 new cases per day last week, the Centers for Disease Control and Prevention (CDC) said.

The Indian “Delta” variant is proving difficult to contain as it is with many other countries around the world with children also being hit.

The number of children hospitalized with Covid-19 was 1,834 as of Tuesday morning and is rising across the country, according to data from the US Department of Health and Human Services (HHS).

Jessica's tweet marking the death of her 14-year-old patient has received more than 116,000 likes and has been retweeted over 30,000 times.

“What kind of parents prevent their child from intubation??” one person asked, while another added: “I can't even begin to [imagine] what it is to live day to day trying so desperately to save those who refuse the vaccine, especially the children who had no say either way.”

Someone else shared: “I am so sorry. I have no idea why you still put up with all this … but the majority of us are grateful for you and your faithful work.” 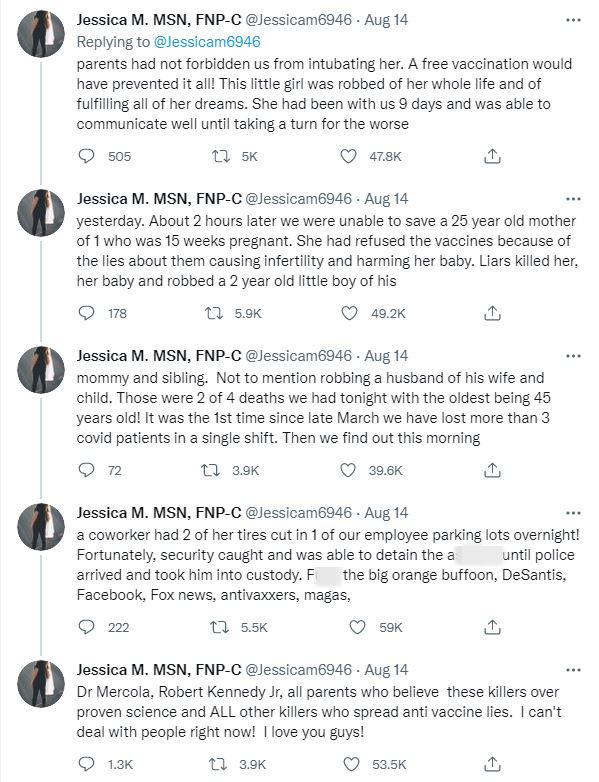