The New Zealand coronavirus outbreak has spread to Wellington, as the first cases recorded outside of Auckland were confirmed.

The Ministry of Health said three cases have been detected in the nation’s capital.

In a statement, the ministry said there were 11 new confirmed cases of COVID-19 in the community, eight of those in Auckland. This brings the total number of cases associated with the current Auckland community outbreak to 31.

One of the cases was a patient being treated for other conditions at Auckland’s North Shore Hospital, prompting the ministry to begin diverting all emergency cases away from the facility as a precaution. 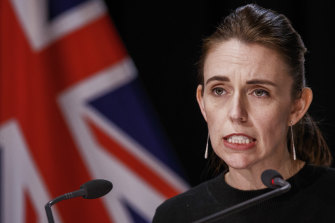 The government will advise at 1pm (AEST) on Friday whether it will extend the three-day national lockdown, which began on Wednesday, after the first case was identified in Auckland on Tuesday. That case was linked to the NSW outbreak, Prime Minister Jacinda Ardern said. Auckland was placed in a seven-day lockdown. 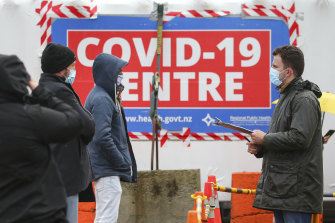 A staff member talks to people waiting to be tested for COVID-19 in Wellinton.Credit:Getty Images

She said the first infection was caused by the Delta variant and traced back to a New Zealander returning from Sydney on a flight managed by the Managed Isolation and Quarantine (MIQ) program on August 7. This person tested positive on August 9 and was transferred to hospital on August 16. However, NZ media outlet Stuff reports that there is still a missing link between this case and community transmission.

New Zealand’s vaccine rollout has restarted after a brief pause earlier this week to improve COVID safety protocols. Some 1.68 million Kiwis have now had their first dose or 33 per cent of the full population. About 19 per cent of the population, 963,000 people, have been fully immunised.