Two Oklahoma death-row inmates were granted stays of execution Wednesday by a federal appeals court, according to reports.

John Grant was scheduled to be executed Thursday and Julius Jones next month. They would be the first inmates in the state to be given lethal injections since 2015 when Charles Warner was given the wrong drug during his execution, according to FOX 25 in Oklahoma City.

Clayton Lockett’s 2014 execution was also considered botched as he wasn’t properly sedated and visibly struggled in pain before his death. His execution took the better part of an hour, according to The Oklahoman newspaper.

The three-judge panel with the 10th Circuit Court of Appeals voted 2-1 to stay their executions in a decision connected to the six-year halt on lethal injections. 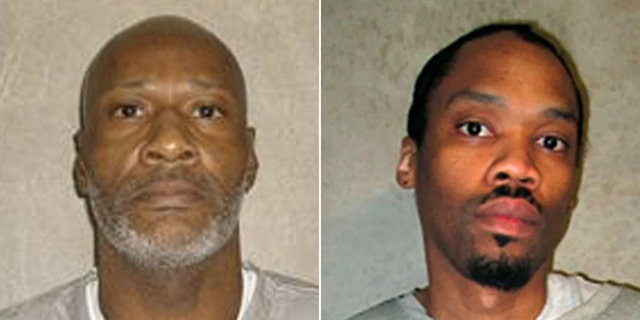 John Grant, left, and Julius Jones were granted stays of execution Wednesday by a federal court of appeals.
(Oklahoma Dept. of Corrections)

Social justice groups have spoken out against executing Jones who has maintained his innocence in Howell’s murder. He has a clemency hearing Monday, according to FOX 25.

The Oklahoma State Department of Corrections said it has implemented new protocols to “ensure that the process works as intended” in a statement before the decision this week.

The state attorney general’s office said it plans to appeal the decision to the U.S. Supreme Court.

“We are hopeful that the Supreme Court will vacate the stay so that justice can finally be served for the people of Oklahoma, including the families of the victims of these horrific crimes,” the state attorney general’s office said in a statement, according to FOX 25.

The Archdiocese of Oklahoma City called human life “sacred” in a statement about the stays and said it gave Oklahomans an opportunity to decide if it is truly a “pro-life state.”

“No matter how serious the crime committed, it is an offense against the inviolability of life and the dignity of the human person,” Archbishop Paul S. Coakley said in a statement posted to Twitter. “We need to end capital punishment in Oklahoma.”

Five other inmates are scheduled to be executed in the state in the coming months whose lethal injections have not at this point been stayed, The Oklahoman reported.