Judges are out of touch, right? They drive expensive cars and live in expensive houses and have no idea how the rest of us live. 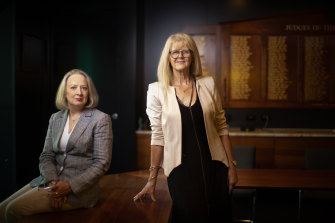 Judges Sexton and Gaynor both worked in criminal law before joining the bench, but on opposing sides of the bar.Credit:Simon Schluter

Judge Gaynor, who was a journalist before she was a lawyer, hasn’t quite shaken the habit of dropping the f-word into conversation. Judge Sexton – and this is unusual for a judge – is not afraid to reveal the identity of the most evil criminal she has come across.

The pair have, between them, been judges for almost 40 years and are the County Court’s most senior women.

Judge Gaynor might be recognisable to some because a video of her unleashing a verbal spray on two young men who stabbed drug boss Tony Mokbel went viral, resulting in the media dubbing her Australia’s “Judge Judy”.

Judge Sexton made her mark within the court as the former head of the sex crimes list, in which she managed sexual offence cases before the court, and shaped its position on the way these cases are run. 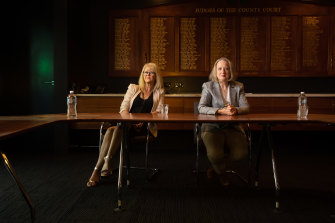 Judge Liz Gaynor and Judge Meryl Sexton have sat on the bench in the County Court for almost 40 years between them.Credit:Simon Schluter

“These blokes need to understand they go from boss to gross in about 10 seconds,” she said.

She was also confounded that it was “just accepted” that, she estimated, 90 per cent of the people she has both acted for and dealt with as a judge are male.

“We’re just used to men being over-represented,” she said.

Judge Gaynor said every woman entering the law should be educated about who to turn to or what to do if they face sexism and harassment.

“It’s paralysing for these women,” she said.

“They’re thrilled to get a job, they’re intimidated about what lies ahead of them and it’s an exhausting profession and then you’ve got these people preying on them sexually. It’s just criminal.”

Judge Sexton added: “I would also say it’s a men’s problem. They have to be educated as well.”

Judge Sexton has overseen or been a part of sweeping changes to the way sex offence cases are run in Victoria. Reforms included ground-rule hearings to decide how vulnerable complainants can be questioned in court and intermediaries who help children and people with cognitive impairments understand what they’re being asked and help them communicate during proceedings. 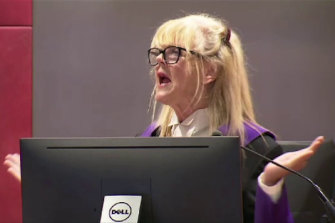 Judge Liz Gaynor in the midst of the tirade against the two men who stabbed Mokbel.

“There’s been a huge number of changes, but there is still some work to do,” Judge Sexton said.

“The table thumping of old – with some exceptions recently – is just not seen as effective. People know that and complainants are obviously better off when they’re not being bullied.”

Now at the top of their game, the judges are often faced with a misconception that they are out of touch with the real world. But in the courts where they preside they come face-to-face with reality at its darkest.

“We see the worst of everything that goes on, every day,” Judge Sexton said.

The worst cases are usually sex offence trials and culpable driving cases, Judge Gaynor said, where often young people with no prior criminal history have killed someone they know.

“It’s an incredibly stressful thing to hand down a sentence in relation to another human being in the community.”

But the law is their guide and armour in making such heavy decisions about the lives before them.

“There’s that protective thing of having those rules of evidence embedded in me and I know what my role is and it comes to your rescue,” she said.

Most of the people they have dealt with, either on the bench or represented as barristers, are the result of a damaged life. But a few have been evil.

Judge Sexton has sentenced one, a sex offender and murderer, that she puts in the evil category. The other two she came across as a barrister. One was a murderer who she wouldn’t name because he’s due for release, and the other was paedophile and former priest Michael Glennon, who died in jail.

“I prosecuted him for about 35 victims, but in the end I didn’t get finished prosecuting him before I became a judge. All that I learnt about him, he was truly evil,” she said. 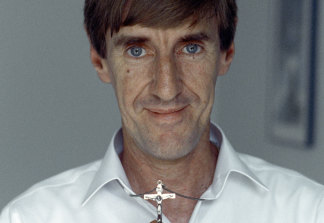 Judge Sexton said convicted paedophile Michael Glennon, pictured in 1991, was in the rare “evil” category of people she has come across.Credit:Mario Borg

Judge Gaynor said she will never forget the eyes of one man – “He had eyes like dead slugs. They were just devoid of any humanity” – but stressed how rare such rotten people were.

“It’s really badly damaged people, all the time. And many of the people we deal with have themselves been victims of crime since the day they were born,” she said.