Australia has hit an online shopping record, with 5.5 million households ordering goods over the internet in November, and Victoria and South Australia recording more than 64 per cent growth in online sales compared with last year. 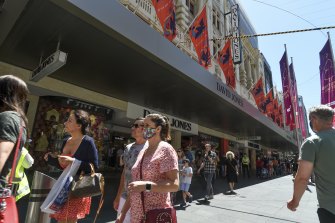 Christmas shoppers were out in force in the Bourke Street Mall on Saturday.lCredit:Penny Stephens

Australia Post says November was the busiest month in Australian online shopping history. Purchases were up by 20.8 per cent compared to last year's pre-Christmas peak (the 30 days to December 18).

Given the sheer volume of parcels in the system, the organisation says it cannot guarantee that parcels sent this week will be delivered by Christmas, unless parcels are sent by Express Post, which will arrive in time if sent by December 19.

A spokesman said national online growth in November was up by 55.6 per cent compared with last year, and in Victoria and South Australia it was up by more than 64 per cent.

eBay Australia spokeswoman Sophie Onikul said the company's research showed 71 per cent of its customers intended to buy from Australian retailers this year.

"When it comes to gifts, video game consoles and tech such as mobile phones are some of our biggest-selling categories right now," she said.

"And following a surge during lockdown classic toys such as board games, books and puzzles remain popular. In fact our research shows 31 per cent of parents are likely to buy their children a board game for Christmas."

She said the sale of chess sets was up by 110 per cent "due to a nation hooked on Netflix’s The Queen’s Gambit", and collectable card games like Pokemon were up by 574 per cent year-on-year.

Sales of bicycles and cycling gear increased by 70 per cent.

But the online buying boom has deprived Melbourne's CBD retail sector of shoppers.

There are signs the CBD is recovering – pedestrian foot traffic increased by about 119 per cent in November compared with October – but the recovery could be slow.

Before COVID-19 an average 911,000 people travelled into the CBD every work day, and the City of Melbourne estimates this figure will fall by 38 per cent – even after 25 per cent of workers return to the office.

In an economic update issued on Thursday, NAB group chief economist Alan Oster said spending in greater Melbourne had recovered rapidly, but the CBD was "much less buoyant".

"For example a year ago, cafes, restaurants and takeaways in the CBD captured 21 per cent of all Greater Melbourne’s spend in this sector. As of last week, it was only 11 per cent." 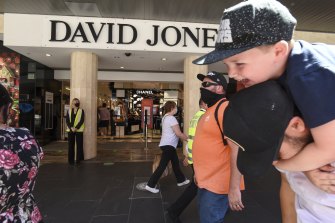 Young and old were in the city, looking for a Christmas bargain on Saturday.Credit:Penny Stephens

Lord mayor Sally Capp said "bringing the buzz back" to the city would keep Melburnians in jobs, and urged people to return to the CBD for their Christmas shopping.

"The Christmas trade period is crucial in a normal year and it is even more so after Melbourne endured months of lockdown in 2020," Cr Capp said.

"Melbourne has a unique retail offer with big brands and stores complemented by independent labels that you can’t find anywhere else. We need shoppers to continue to return to help our businesses recover and start to thrive again."

According to Citi Research, Victorians have turned to their local shopping strips and centres in the wake of COVID-19 restrictions.

"A recurring theme of our discussions was that the make-up of a centre’s catchment remains critical," its researchers wrote.

"As an example, CBD-focused centres have been disproportionately affected by COVID, due to a sharp rise in employees working from home (physical occupancy in Melbourne offices was estimated at [less than] 10 per cent recently) and reductions in tourism. On the other hand, centres such as Highpoint are reportedly benefiting from working from home."

Its researchers toured more than a dozen Melbourne shopping centres, speaking with retailers and centre operators. They found a "reasonably widespread acknowledgement" that customer habits would change permanently.

"Increased online penetration was one of the more commonly-cited shifts, although there still appears to be some scepticism about the appeal of ecommerce within parts of the industry.

"It was noted that delivery challenges (for both grocery and other retailers) through the pandemic period may have affected the quality of the customer experience with e-commerce, and that this may reduce the extent to which online takes share. We agree with this logic, but see an ongoing rise in e-commerce penetration as a significant headwind."