Only Fools and Horses Peckham bottle signed by Del Boy worth £8,000

An original bottle of ‘Peckham Spring’ water from an iconic episode of Only Fools and Horses signed by Del Boy is set to fetch thousands of pounds when it goes under the hammer.

The prop – heralded as an ‘incredible piece of television history’ – featured in the 1992 Christmas special episode Mother Nature’s Son – and is estimated to fetch up to £8,000.

It was part of the production line Del created as he started bottling up water from the tap in his flat and selling it as mineral water ‘from an ancient and natural source’.

Some 20 million people tuned in to watch the Peckham Spring episode, which ends when it is revealed that toxic waste has been emptied into the water source and when the lights are turned off, the bottles glow in the dark. 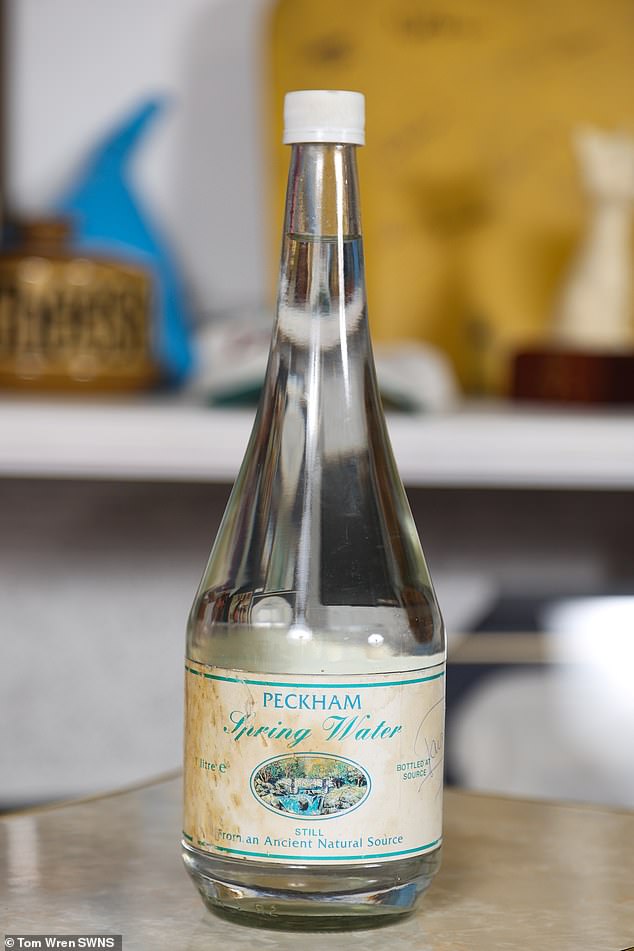 The prop, which is an ‘incredible piece of television history’, featured in the 1992 Christmas special of Only Fools and Horses. Twenty million people tuned in to watch the iconic episode

Around 200 bottles of Peckham Spring were made by production during recording of the beloved British sitcom and once studio filming wrapped, a few lucky audience members were able to take some as souvenirs.

This bottle was one of those given out, and is believed to be the only example that carries the autograph of Del Boy himself, Sir David Jason.

It is going under the hammer at a special auction in Bristol next month, the city where much of Only Fools and Horses was filmed.

Auctioneer Andrew Stowe said: ‘It’s an incredible piece of television history. To be able to hold an actual bottle of Peckham Spring water is very surreal.

‘The episode is one of the most famous in the series’ history, and this bottle is one of those key props. You see it, and just smile.’

Mr Stowe added: ‘Twenty million people tuned in on Christmas day 1992 to watch this episode, and its humbling to think that this very prop was responsible for making a lot of people laugh.

‘Bristol is the home of Only Fools & Horses – the majority of the series was filmed in the city, so it’s always special when items like this ‘come home’.’

In July, one super fan dished out £6,000 for one of the specially made bottles, which was almost five times its auction estimate of £1,200.

It is being sold, along with other items from the sitcom, at East Bristol Auctions on December 2.