Overseas travellers hold their nerve despite ‘slight wobble’ from Omicron

Most Australians with overseas bookings are holding their nerve amid the latest COVID-19 uncertainty, travel agents say, although the majority of people are still not prepared to take risks.

Flight Centre managing director James Kavanagh said there was a surge in bookings when Australia’s travel restrictions were lifted in November, before the Omicron variant caused some hesitation.

“We saw a slight wobble with general inquiries for new bookings over a few days. There was a little bit of uncertainty with unknown impacts,” he said.

“There seems to be a restored confidence. We haven’t seen mass cancellations, which is great news.”

But while cancellations might be low, there’s a large cohort unwilling to travel, Cherrybrook Travel manager Liz Ellis said.

“There’s a whole bunch of people who travel every now and then – they’re hesitant,” she said.

“They make up a big percentage of bookings. Other clients who travel a lot and understand risk – they’re still going.”

Ms Ellis said she’s processing more international bookings than domestic, but overall volumes are at 10-15 per cent compared to “the ancient era” before the pandemic.

“People are very dubious about going to Western Australia, Northern Territory, Queensland – they’re super wary about doing that,” she said. “There’s a lack of trust in the government and policies, and moving goalposts all the time.”

Last week Qantas chief executive Alan Joyce told an aviation forum that the airline recently had "more revenue coming in, for I think four weeks, internationally than we had domestically – that's how big the pent-up demand was".

A big barrier to overseas travel is “the sheer cost” of onerous testing requirements, Ms Ellis said. She recently told one extended family of 10 that they needed to budget $6000 for three tests each.

These hurdles aren't stopping Jim Bell, 69, from Glenhaven in Sydney's north-west who is desperate to travel overseas again. He and his wife are going to Fiji in April after having to cancel trips to Antarctica in January and New Zealand in March due to border issues. 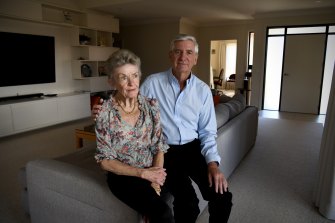 “You can hide under the blanket … We’ve been pushing to try make things happen,” Mr Bell said.

“[But] the bureaucratic side is very difficult. It’s almost proving too much.

Janine Malouf, 64, from Hunters Hill is going to Hawaii in January.

“I feel more confident travelling internationally than I would domestically given border closures,” she said, citing Queensland’s decision on Wednesday to classify two planeloads of people as close contacts.

Mrs Malouf is frustrated about the level of risk-aversion to COVID given world-leading vaccination rates.

"Now we have our vaccinations but the freedoms are still not there," she said. "Why are we still talking about it? We’re all vaccinated, let’s get on with it. I've wasted two years of my life."

Mr Bell agrees and says "the window is shrinking" for older people before they are medically unable to travel.

"You’ve got to have an attitude of 'How do you make it happen?'" he said.

Mr Kavanagh said travellers looking to go overseas next year should book ahead because availability is tightening as other countries open up faster than Australia.

“Fiji is going off. The UK is incredibly popular still … We’re getting a lot of holidaymakers booking in the [European] summer of next year and beyond,” he said.