Zookeepers in Pakistan were left shocked after learning that an elephant they had been caring for for 12 years, and thought was male, is in fact a female.

The discovery was made after a team of vets were dispatched by the Four Paws global animal welfare group to examine four elephants at Karachi Zoo and Karachi Safari Park.

Four Paws said they had received a request from a Pakistani court to inspect the four animals and assess their wellbeing. 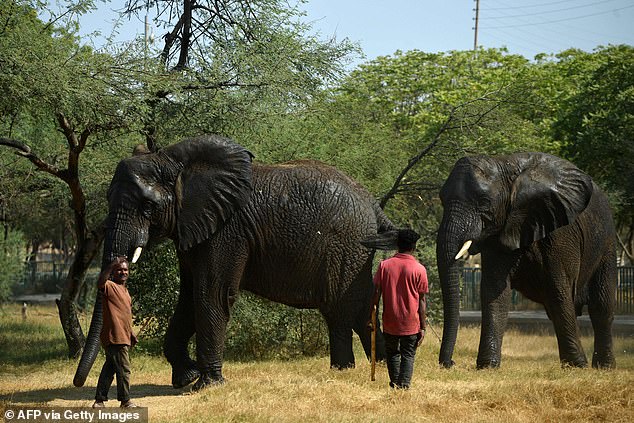 Medical experts discovered that one of the elephants being kept at Karachi Safari Park, which for 12 years had been thought to be a male, was in fact female. Pictured: Two of the examined elephants seen during the visit by Four Paw vets 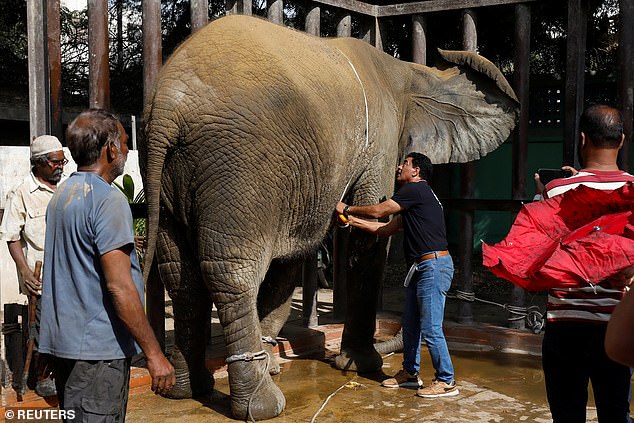 A number of physical and health checks were conducted on the animals to assess their wellbeing – such as body measurements, which were taken by Amir Khalil, Four Paws’ director of project development 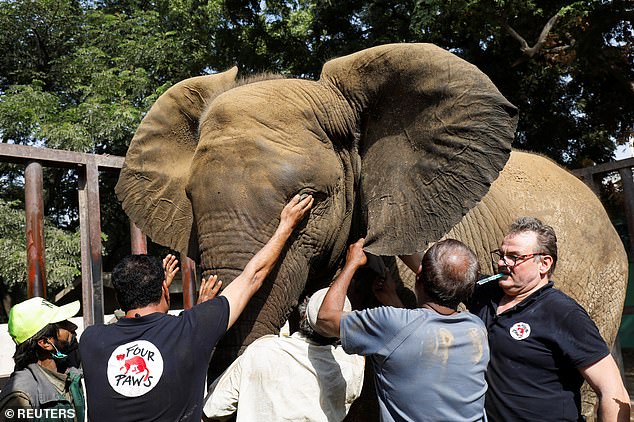 Pictured: Dr Frank Goeritz (right) takes blood samples from one of the four elephants that were examined during the vets’ visit this week

The team carried out a number of checks, including visual inspection of body condition, blood collection for analysis, behaviour, foot and dental status, standing sedation and body measurements, among other procedures.

Dr Frank Goeritz, who headed the veterinary team, said that overall the health of the four animals was good.

However, during examinations it was discovered that one elephant, named Sonu, which zookeepers believed for 12 years to be a male, was in fact female.

An ultrasound was carried out on Sonu, who has been staying at the Safari Park in Karachi, during which a uterus and inactive ovaries were discovered. 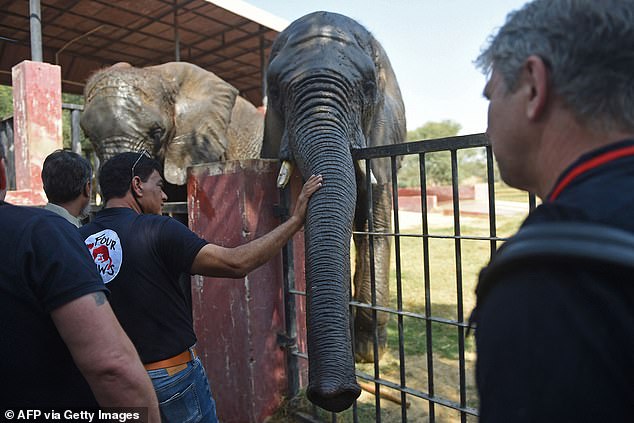 Four Paws said they had received a request from a Pakistani court to inspect the four animals and assess their wellbeing. Pictured: A vet examines the trunk of one of the four elephants 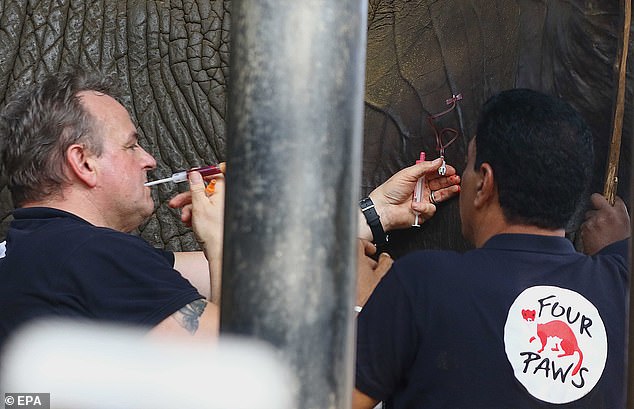 Pictured: Dr Frank Goeritz takes blood samples from one of the elephants during the medical examinations carried out this week 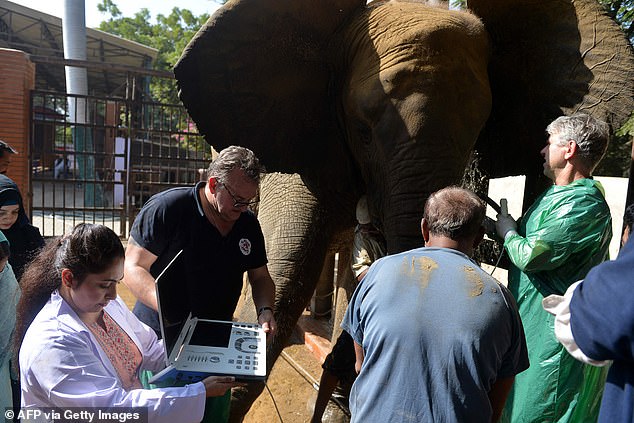 During the examinations, an ultrasound was carried out on Sonu, who has been staying at the Safari Park in Karachi, during which a uterus and inactive ovaries were discovered. Pictured: One of the four elephants is examined by the team of vets

It is thought that zookeepers mistakenly believed that an oversized clitoris had been male genitalia.

A medical examination was conducted on Sonu’s vestibulum after zoo staff claimed the elephant’s genitalia had been left exposed on multiple occasions.

Sonu, and another elephant called Malaka, have been living at the Safari Park since being brought there in 2009 from Tanzania.

Meanwhile, the team of vets also examined another three elephants, with Dr Goeritz that one of the creatures needs a ‘complicated’ surgery to remove damaged and infected tusks. 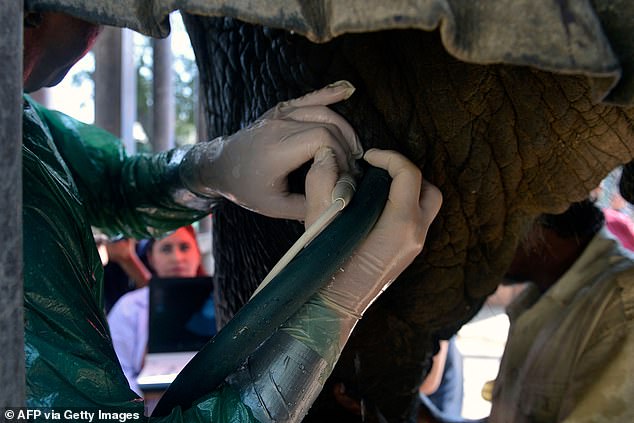 Dr Frank Goeritz concluded that while the general condition of the four elephants was ‘good’, that urgent medical care was needed to treat some issues 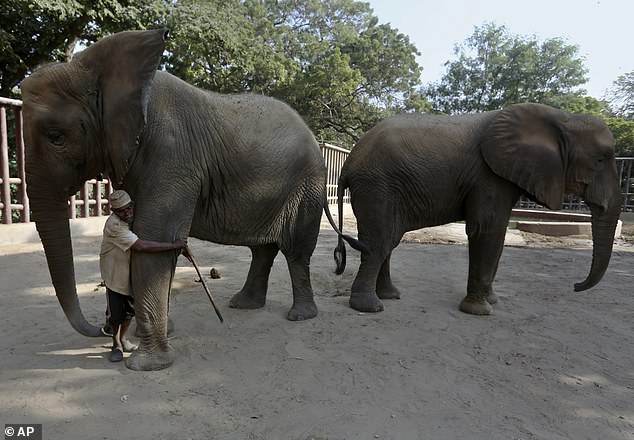 Pictured: Two of the elephants which underwent medical examinations in Karachi, Pakistan, this week

A second elephant has dental problems and a medical issue with a foot, according to the vets.

Such ‘diseases are very painful and can lead to life-threatening situations in elephants’, the vets said, according to a report prepared by Dr Goeritz.

Following the medical examinations of all four elephants, a medical report was submitted to a local Karachi court.

The visit by the vets comes a year after the rescue of a male elephant named Kaavan, who was transferred from Islamabad to Cambodia and now lives in an elephant sanctuary.

Kaavan had languished in the Islamabad zoo for 35 years, spending most of that time in chains. It also lost its partner in 2012.

Dr Goeritz and his team of vets were called in to conduct the checks back in September, but the Karachi Metropolitan Corporation argued that the animals had no health issues and required no medical assistance, according to local reports.