Parents tell how their children have coped with the Queen's death

Parents have shared how their young children have coped with the news that the Queen has died.

Her Majesty’s death was confirmed by the Royal Family at 6.30pm yesterday, with Buckingham Palace saying she had died ‘peacefully’ at Balmoral in the afternoon.

In Britain, the moment shocked the nation, which has now gone into a period of mourning for the UK’s longest-ever reigning monarch who gave a lifetime of service to the country.

Mum-of-three Yinka Ewuola, from south London, said she spoke with her eldest son about the Queen’s passing, using it as an opportunity to talk about values, her marriage to Prince Philip and the history of the British empire.

She said: ‘One of the really heartbreaking images of the Queen was her sitting by herself as Prince Philip’s funeral.

‘One of the things I spoke about with my son was how poignant it was that she was a Queen who, when it came to Covid, was told these are the rules and she followed them.

‘The fact she had been married for 73 years and sat at her husband’s funeral all by herself because that was what the rules were, it was very heartbreaking to see but a real testament to her sense of duty.

‘So we spoke about living according to your values.’ 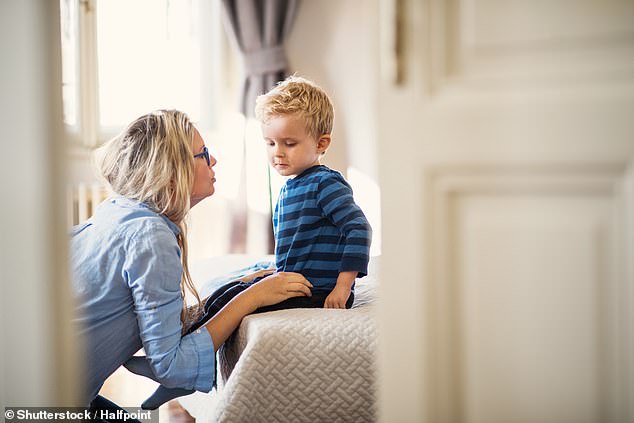 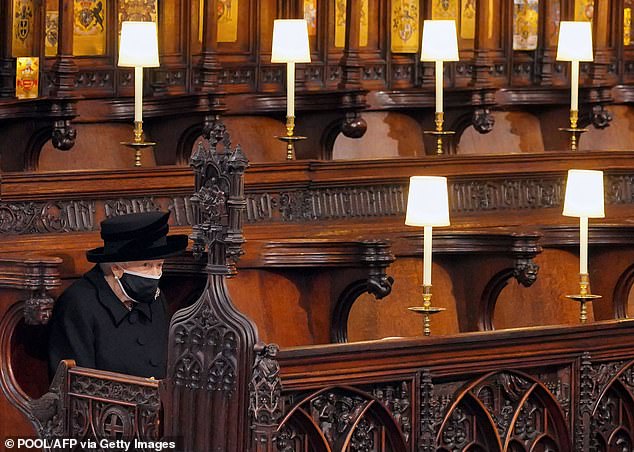 Mum Yinka Ewuola said she spoke to her son about the Queen’s ‘sense of duty’ when breaking the news of his death, referencing her sitting on her own at Prince Philip’s funeral in April 2021 because of Covid-19 regulations at the time

Ms Ewuola said she also spoke to her son about ‘the duality that many members of the countries colonised by Britain may feel at this time’.

‘My son was like, “wow this is such a big event, we’re never going to have enough Queen in your lifetime mum.” His responses are always quite comical and wry.’

She continued: ‘He was really interested and said, “you always find a teachable moment, mum.”‘

Meanwhile, another parent said on Thursday evening, after the news broke, that their ‘son is still awake and he’s five’.

They said: ‘I told him the Queen has died. I sat him down and told him that it’s history and it’s going to be talked about a lot. We sat and talked a lot about her life as a monarch (he loves Henry VIII).’

Another parent said they had told their five-year-old ‘the Queen has died and they might talk about it today at school, results in me not being able to stop my tears from her from falling’.

They added: ‘Royalist or not, she has to be admired and respected’.

Elsewhere, one dad shared a sweet anecdote of his daughter going to Brownies but being ‘worried she’ll forget to change the word “queen” to “king” when she says the Brownie Promise.’

He continued: ‘I’ve told her I don’t think Charles will mind.’

It comes as schools and colleges have been told to remain opening following the death of the Queen.

A period of national mourning for the Queen has now commenced, which will continue until the end of the day of her state funeral.

Once the date of the funeral has been set, officials will issue schools and colleges with further guidance.

However, until more detail has been confirmed schools and colleges ‘should remain open’.

The Queen’s funeral is thought to be held at Westminster Abbey in about 10 or 11 days’ time, with the date to be confirmed by Buckingham Palace.

The day is likely to be declared as a bank holiday, but this will be confirmed by the palace and Government, according to the BBC.

If a bank holiday is declared, schools will be shut. 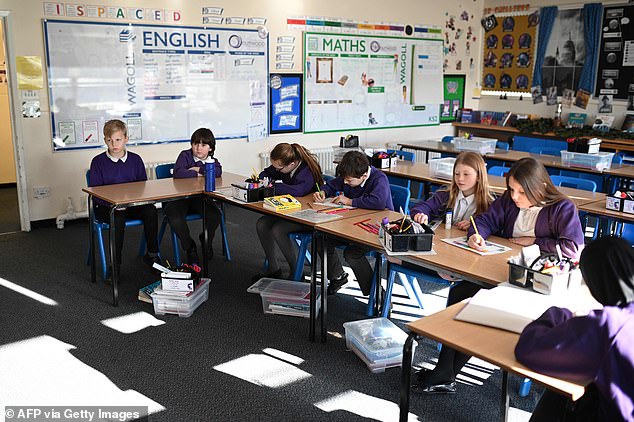 Once the date of the funeral has been set, officials will issue schools and colleges with further guidance. Stock image of children at school

Meanwhile, schools around the UK have held special assemblies and lessons to commemorate the Queen on Friday morning.

Others have held a minute’s silence to pay their respects to Her Majesty.

One primary school in Brighton said its assembly ‘showed our appreciated to Queen Elizabeth’.

‘We discussed how the Queen epitomised all of our school Values and paid our respects,’ they tweeted.

Fiona Yassin, founder of the Wave Clinic, has issued advice to parents who may need help speaking to their children about Queen’s death.

She said that ‘many children will be in shock about the Queen’s passing’.

‘After all, this may well be the first person that they know who has actually died.

‘For some it may even feel like they are losing a family member.’

She continued: ‘At this time, listening skills are essential.

‘Listen to the young person at this time and encouraging them to talk about what they are feeling.’