‘Party like it’s 1992’: Property Council pushes for landmark plan to save CBD

Victoria’s property industry is pushing for a revival of the landmark Postcode 3000 campaign of the 1990s, credited with transforming Melbourne’s CBD from a “ghost town” into night-time destination, to get the city bustling again.

The sector’s key lobby group the Property Council warns the return of workers to city offices after COVID-19 lockdowns continues to be a “matter of life and death” for central Melbourne, predicting that if workers continue to return at current rates the city will lose $2.6 billion this year. 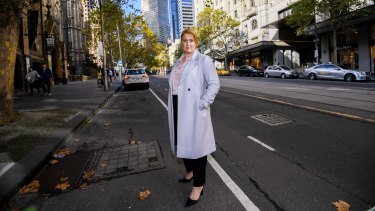 Property Council executive director Danni Hunter is calling for a plan to revitalise the city on the scale of Postcode 3000, credited with transforming the CBD in the 1990s.Credit:Joe Armao

City office occupancy returned to 35 per cent in March, according to the Property Council, still the lowest of any Australian CBD.

A decline in the numbers of people living and studying in the city has led to about double the number of vacant city rentals on the market than before the pandemic.

The Property Council’s Victorian director Danni Hunter said City of Melbourne, the state government and industry needed to recapture the success of Postcode 3000 to give a short-term boost to city property.

“We have never seen visitation to the CBD fall off a cliff like we have in the pandemic. There are structural shifts going on but we can’t afford as an economy to lose the value of the CBD,” Ms Hunter said.

“It is really all about getting … students, residents and workers to supercharge that economic recovery.”

Postcode 3000 was a City of Melbourne planning policy that encouraged the development of 3000 apartments in the central city in five years from 1992, boosting central Melbourne’s population.

The lord mayor at the time, Des Clark, said then that the city streets were at risk of being “soulless glass canyons” that became “a ghost town at weekends”.

But while Postcode 3000 was about using financial incentives to drive residential development, the Property Council in a state budget submission envisages recapturing the spirit of the plan with incentives to encourage more people to return to live and work in the city.

The post-pandemic iteration would include Homes Victoria buying existing city apartments to meet a shortfall in social housing.

The group is also proposing that for at least 18 months new and existing central city property purchases receive a 100 per cent stamp duty exemption and the state government put greater efforts into encouraging global businesses to open new offices in Melbourne.

“We want to party like it’s 1992,” Ms Hunter said. “Postcode 3000 took a little while, but we can’t be complacent, we have to seize this momentum around economic recovery. We need to make sure we cement our position as a global city of choice.”

The Property Council also called for a mid-year return of international students, after there were 80,000 fewer students in Victoria last year, and a clear plan to welcome migrants again.

“We recognise there are limitations with our quarantining facilities to get people through the arrival gates, but we need to have a plan of how we are going to get there,” Ms Hunter said.

The state government has asked the federal government to allow an extra 120 overseas students, actors and others travelling to the country for business into its hotel quarantine program each week from May 24.

Federal Education Minister Alan Tudge said the proposal would be considered but said the government was “very cautious” about approving new quarantine plans for anyone other than returning Australians.

Catch all the day’s headlines

At the end of each day, we’ll send you the most important breaking news headlines, evening entertainment ideas and a long read to enjoy.  Sign up here.