Desperate pet owners are appealing for help as they try to catch a mystery cat killer after a spate of ‘up to 13’ poisonings took place in a north Wales town.

Leanne Shaw, 34, pleaded for more information when her three-year-old cat Binx died out of the blue.

But she now claims that having been contacted by other cat owners nearby, there have been up to 13 sudden deaths in ‘a very small area of Flint’ in north Wales.

Ms Shaw was shocked to find her beloved pet lying next to a path in pain before she rushed him to the vet but to no avail.

She described seeing Binx ‘moving like a zombie cat’ after he started having seizures and scratching her.

A post-mortem revealed that the cat died of antifreeze poisoning, which Ms Shaw is warning others about.

Her two children, aged eight and five, have been left heartbroken after seeing the cat in ‘extreme pain’.

She first became suspicious after another two cats died suddenly in the neighbourhood. 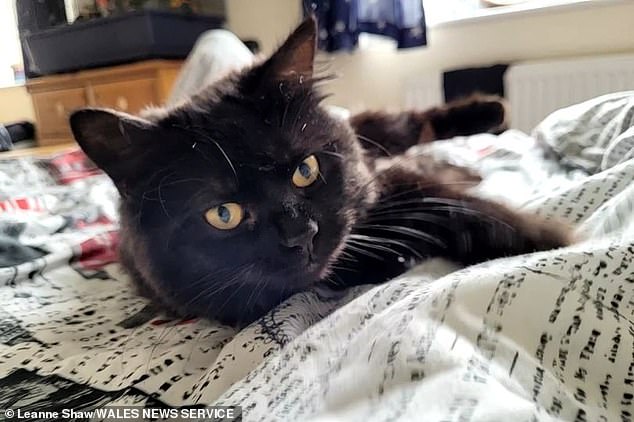 Leanne Shaw, 34, is on the hunt for a mystery cat killer after her three-year-old cat Binx (pictured) died from antifreeze poisioning

‘We found it a bit suspicious that two cats died from the same thing,’ the mother-of-two said.

‘I mean one cat could have been an accident but for two cats to die of the same thing a month apart got us all thinking.

‘I started worrying about my cats then, I have three of them so I called them all for their tea but only two came back that evening.’

Ms Shaw began searching for her cat when she heard a meow coming from a nearby path.

‘I called his name near the top of the path and heard him cry. I instantly knew it was him and he wasn’t okay, the meow was awful and painful,’ she explained.

‘As I made my way through the thorns and nettles I saw him laying on his side, his fur soaking wet, covered in leaves, mud and sticks.

‘As I carried him home he sounded in so much pain, he had chemical burns to his mouth and he kept having seizures with random bouts of what can only be described as him hallucinating.

‘He would look at me all calm and still then suddenly his eyes went huge, his claws came out and he looked terrified while he tried his best to kick his legs, they weren’t working in coordination at all.

‘I had to lay him on the floor at one point as he scratched me, it was terrifying seeing him so scared but moving like a zombie cat before flopping back down.’ 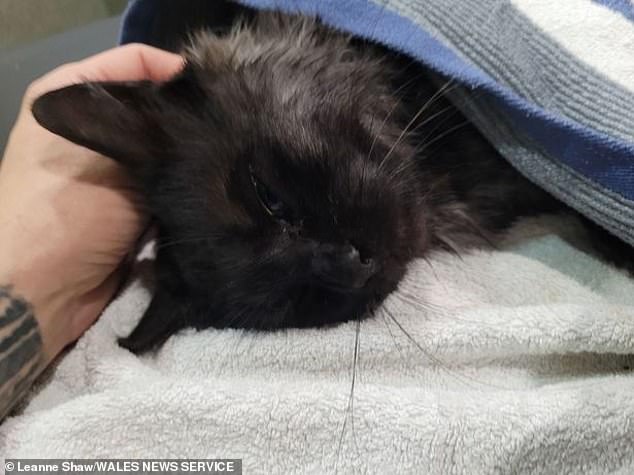 Ms Shaw, a mother-of-two, claims that ‘up to 13’ cats have died from antifreeze poisoning in the small area of flint

Ms Shaw said that she has been privately messaged by ‘at least five people’ whose cats were similarly poisoned by antifreeze in the area.

She added: ‘As well as those who commented on my post, 13 cats have died from antifreeze in this very small area of Flint.

‘Please keep your pets safe, make sure you feed them so regularly and on schedule that they know when and where their food is coming from, make sure fresh water is kept out and refilled to make sure they know where they can safely drink from.

‘If you see any suspicious activity from anyone regarding this then report it even if it turns out to be innocent, anyone in the area if you have any suspicions who it could be get in touch with the RSPCA and report it, they will check it out and it’s all confidential.’

A North Wales Police spokesman said: ‘At around 11pm on Thursday, September 22, we received a report that a cat is suspected to have been poisoned on Coed Onn Road, Flint.

‘Officers are looking into the reports and ask anyone with information that could assist with enquiries to contact officers on 101.’

An RSPCA spokesperson said: ‘These are extremely sad and upsetting incidents and we extend our sympathies to the owners of the cats who have lost their lives and urge pet owners in the local area to be vigilant.

‘At this stage we don’t know if these were accidental incidents or deliberate but in the meantime we would ask everyone in the area to check where they keep their pesticides and chemicals and make sure they are secure and out of the way.’