Victorian health authorities are growing increasingly concerned about the spread of coronavirus among children following a number of suspected cases of outdoor transmission and a surge in infections involving school students under 10.

One day after metropolitan Melbourne was plunged back into its toughest lockdown since last year’s second wave, Chief Health Officer Brett Sutton said his team was investigating a potential case of playground transmission and a “more definitive” incident of transmission between students who walked home together. 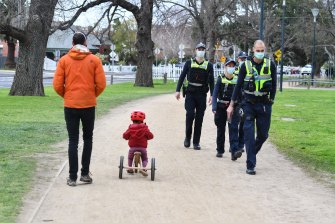 “[These were students] who were not in classes together and did not have any other face-to-face interaction other than sharing a walk home,” Professor Sutton said. “So the risk is there – and we want to minimise every opportunity to get ahead of this.”

Authorities are also worried about the number of cases emerging in St Kilda and surrounding suburbs, as contact tracers struggle to trace five mystery cases. Health Department deputy secretary Kate Matson said “the only thing they share is geographic proximity”.

Twenty-four new cases of COVID-19 were recorded in Victoria on Tuesday, far fewer than the 452 cases recorded in NSW.

Premier Daniel Andrews said this was a trend “we haven’t seen” in Victoria before, and used the figures to justify his decision to extend and tighten Melbourne’s lockdown, including a curfew from 9pm to 5am and the closure of playgrounds.

Police began patrolling parks on Tuesday as families woke to taped-off playgrounds. Fitzroy North dad Toby Cummings said it was hard to find anything to entertain his son Louis, 8, who is homeschooling.

“Getting to a playground is one of the few things you have left to alleviate boredom with the kids, it’s a punch in the guts,” he said.

Child health experts are divided about the government’s approach.

Fiona Russell from Murdoch Children’s Research Institute said the Delta strain was more infectious for both adults and children, and therefore harder to mitigate, saying “the problem is there isn’t an alternative [to Melbourne’s lockdown] at the moment because there’s been no plan for the schools”.

“Ideally, teachers should be prioritised for vaccination, VCE students should be offered vaccination and parents should also be vaccinated. Those are all the things that should help prevent infections in children,” Professor Russell said.

“There is a statement by the Chief Health Officer that perhaps one contact in a playground may have led to disease transmission,” the University of NSW academic said. “Is this evidence-based medicine? Do we really base policy on one possible case of transmission in a playground?” 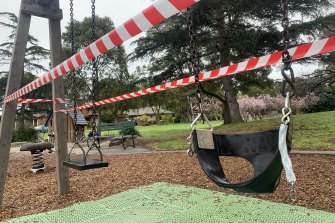 Tape blocks off access to swings at Basterfield Park in Hampton East on Tuesday.Credit:

“Despite the increase in hospitalisation of children in some countries, there are very few deaths. Indeed, the Australian health system is so much better than the United States’, that we are unlikely to see any more than [a] few deaths in children despite the high number of infections.”

More exposure sites were added on Tuesday, including a childcare centre in the outer southeast suburb of Carrum Downs, and the government has urged more people to get tested in a bid to contain the outbreak and ease restrictions on September 2, as planned.

There are five unlinked cases in the St Kilda East area, near where 69 guests from Melbourne’s Orthodox Jewish community attended an illegal engagement party last week.

About 50 exposure sites now run from South Melbourne to Brighton, fuelling fears of the potential for further outbreaks.

However, amid anger over the engagement party that resulted in at least one case of transmission, Mr Andrews called out cases of anti-Semitism directed at the Jewish community.

In one case, a Royal Melbourne Hospital staff member was fired after allegedly posting an anti-Semitic comment on social media about the party.

“Anti-Semitism is unacceptable and evil, and we have a zero-tolerance approach to that in our state,” Mr Andrews said.

“The event … was not a function of being Jewish. Those people [who broke the rules] are being dealt with. Them breaking the rules was not a reflection on the Jewish community more broadly.”

Opposition Leader Michael O’Brien agreed, saying there was no point in “scapegoating” people.

The comments came after Melbourne’s lockdown was extended for two more weeks, prompting an angry backlash from civil liberty groups, the state opposition and fatigued Victorians.

As mental health experts warned about the impact of the prolonged lockdown, Mr Andrews acknowledged on Tuesday that the government might have to plough more resources into the mental health system to help those who were struggling to cope.

Professor Sutton also threw his support behind appointing a mental health commander to appear at the government’s daily briefings and provide guidance to Victorians “on how best to manage in these difficult circumstances”.

Under the latest changes, the number of staff will be restricted on construction sites and rules around exercise have also been tightened.

Victoria’s Public Transport Minister also announced on Tuesday that late-night public transport services would not run on Fridays and Saturdays during the lockdown.

Labor MPs who spoke to The Age on condition of anonymity for fear of publicly criticising the government said there were pockets of unrest among marginal seat holders about the latest restrictions, but many MPs said they were confident in the Premier’s approach, which was described as a deliberate tactic to “lay blame elsewhere”.

“[Mr Andrews] aligns himself with the underlying sentiment in the community that it’s not our fault,” one Labor backbencher said.

“If you have to announce a lockdown extension and you appear angry, as he did, then it can’t be your fault.

“Instead, he goes out there and says it’s NSW, or it’s the people at the engagement party and it works.

“If things weren’t going so bad for the federal government and NSW, then the mood might be different here, but it’s not.”