Police hunt mugger who left pensioner, 87, with horrific injuries when he stole her handbag and went on a spree with her bank cards

Police are on the hunt for a mugger who left an 87-year-old woman with a broken arm and needing stitches.

The thief knocked the elderly woman to the ground at 11.30am in Streatham, London, as he stole her handbag.

The victim was left with her entire right arm covered in one giant bruise, a bad break and needing stitches in her right hand – and is now too scared to sleep at night or leave her home.

She had been planning to visit her family that day and was buying flowers and prosecco before walking home with a friend.

The thief pounced just after the pair parted ways at the friend’s house.

The victim then felt a ‘mighty blow’ from behind which forced her to the ground.

She looked back at her attacker from the floor and saw that he was slim, dressed in black trousers and wearing a black jacket with the hood up. 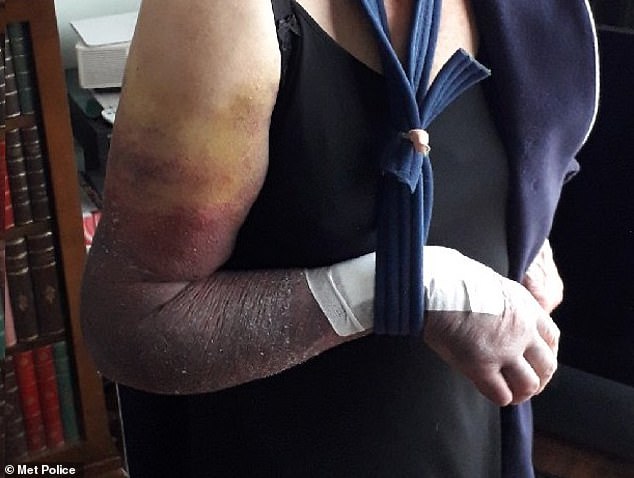 When the woman tried to get up she found she was in too much pain so cried for help and a local resident came out of his house to assist her. 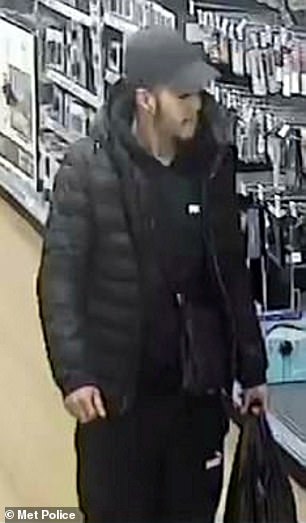 The woman’s bag had been stolen and shortly after the theft a number of transactions using her bank cards were made at shops on Streatham High Road.

The handbag was later recovered by police in a nearby street.

Detective Constable Caroline Benjamin, of the robbery investigation team, based at Walworth police station, said: ‘This was a horrible and cynical attack on a vulnerable and defenceless woman.

‘The victim is now too scared to walk around on her own and was left unable to sleep in her bed due to the pain of her injuries.

‘She prides herself on being a person who looks after other people, but she now has to rely on others to bring her meals and help her with her affairs.

‘No one should ever be left feeling frightened to walk out in their own community. I am sure bringing the person responsible to justice will help allay her trauma.

‘This deplorable thug needs to be brought to justice as soon as possible and I am appealing to the public to help.

‘I would ask anyone who recognises the suspect, saw the events leading up to the robbery, or saw the suspect later in the shops, to call police immediately.’