A police force is bringing back traditional headwear to reinforce the authority of officers.

The custodian helmet has been ditched in recent years in favour of gender-neutral baseball caps.

Now Lancashire Police is to scrap the US-style headwear, pictured, for all officers.

The force is spending £40,000 on bowler hats for females and white flat caps for males.

Police and Crime Commissioner Andrew Snowden said: ‘This change is about reinforcing the figures of authority police officers should be in our communities.’ 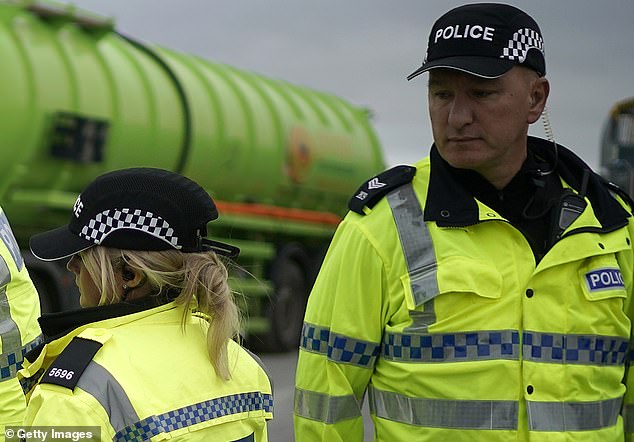 Lancashire Police is scrapping the US-style, gender-neutral baseball caps in favour of traditional headwear, including bowler hats for female officers and flat caps for male officers

It comes just six years after the force spent thousands bringing in caps which it hailed as ‘more practical’.

Yesterday Chief Constable Chris Rowley revealed the caps were loathed by many officers: ‘This issue has been raised with me consistently for more than a year by officers who don’t like wearing the baseball caps, and I’ve always felt that traditional headgear is smarter and presents a more professional appearance to the public.

‘I make it clear to my staff – both new recruits and those officers with more service – that I have high standards. I expect them to be smart when on duty, and I expect them to deliver a high quality of service to our communities.’

Traditional flat caps will be issued to all male officers, with female officers given the option of wearing bowler hats which will include Lancashire Constabulary insignia.

Many of the officers who retained their old headwear have already started wearing them on the streets.

The force is just the latest to axe baseball caps which have been likened to a ‘Burger King’ uniform by some critics who complained they made officers ‘look like Jimmy Krankie’.

Northamptonshire Police paid more than £23,000 to introduce baseball caps after research suggested the new headwear would eradicate the issue of transgender officers having to decide between custodian helmets for males and bowler hats for females.

But two years later, Chief Constable Nick Adderley said they did not ‘not portray the right image’.

The announcement by Lancashire Police has not pleased everyone though.

Blackburn with Darwen Council leader Phil Riley told his local paper: ‘It seems an odd thing to do.

‘I don’t see how it will help with the priorities that public have for policing.