A police worker has been spared jail after he was caught filming his colleagues urinating in the gents toilets.

One member of staff, who cannot be named, noticed in 2017 that ‘part of a mobile phone’ was visible over the top of the cubicle whilst he was using the toilet. 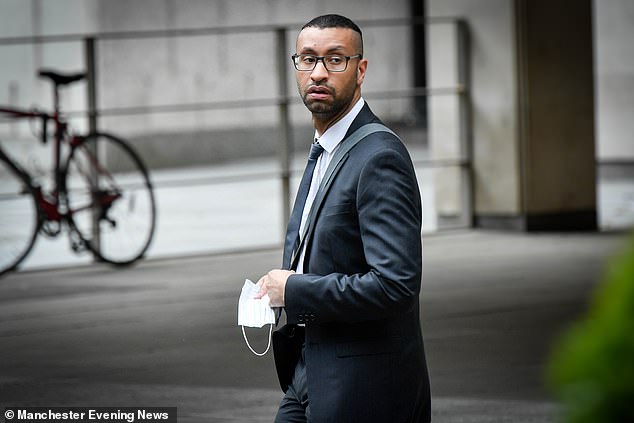 Jean Renoir Janga (pictured outside court today), 36, has been spared jail after he was caught filming his colleagues urinating in the gents toilets

He confronted Janga, of Bamber Bridge, who denied it and the matter appeared to be dropped, Manchester Crown Court heard.

But in the autumn of 2017 a row broke out between Janga and another member of staff which resulted in him being suspended and his mobile phone was taken.

Officers then found the videos of his colleagues on his phone.

Following a trial, Janga was found guilty of six offences of voyeurism and was today handed a community order.

Prosecuting at the trial, Jonathan Savage said Janga ‘secretly’ set up his mobile phone in the gents toilets at his place of work to record colleagues as they used the toilet.

‘The purpose of his doing so was for his sexual gratification’, he said.

It was said that he was struggling at work and that his supervisors were aware that he had ADHD and ‘efforts were made to help him cope with work’. 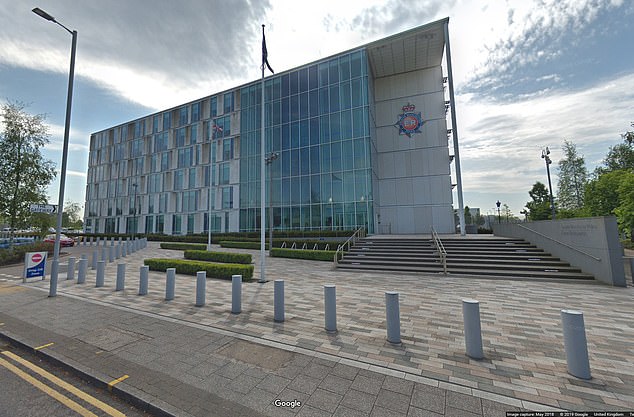 ‘As a result of the recordings found, the defendant was arrested and interviewed,’ Mr Savage said.

He told officers that he had been having problems with his condition as his medication had changed and he started to experience panic attacks at work.

The jury were told that he said that he ‘found solace’ in toilet cubicles as they were secluded and calm and he could calm down there, but said that he once heard suspicious noises whilst in there, and decided to use his phone to effectively ‘look around corners to see if anyone was doing anything wrong’.

He said he would delete them as soon as he realised there was ‘nothing untoward’ on them and denied any sexual gratification from the recordings, the court previously heard.

But jurors saw through his claims and found him guilty, with officers saying Janga had filmed the men ‘for his own sexual desires and gratifications’.

He was said to have no previous convictions.

In mitigation for Janga, Patrick Williamson said the images on his phone were deleted and were not sent or distributed to others.

‘The court cannot ignore the background to these offences and the degradation of the defendant’s mental health in the months leading up to the commission of these offences,’ he said.

‘The circumstances which led to this behaviour are wholly out of character.

‘It’s extremely unfortunate due to the exemplary work he has done.

‘He expresses remorse. The defendant is remorseful for acting in this way, the issue is as it was at trial – the motivation.’ 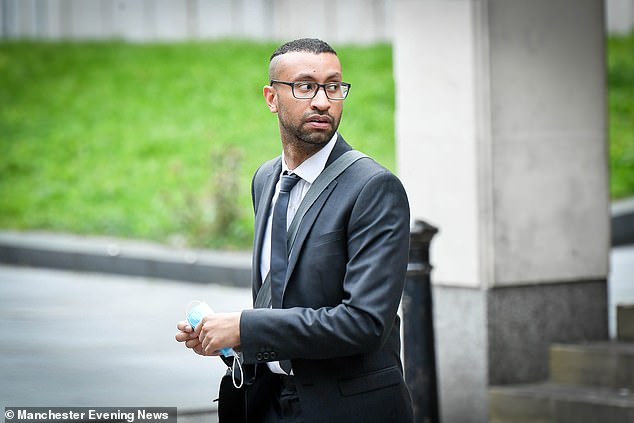 Following a trial, Janga was found guilty of six offences of voyeurism and was today handed a community order

The court heard that Janga was suspended from his role and is currently awaiting disciplinary proceedings.

Sentencing him, Recorder Jeremy Lasker said: ‘This is an extremely sad case, because, for many years, you did excellent service on behalf of the Greater Manchester Police, working in an extremely difficult area – and that really deserves to be recognised.

‘But the other side of the coin to which I have already made reference to, is the betrayal of trust and of friendship that you had with these work colleagues.

‘I don’t think you can ever repay the harm you have caused.’

Janga was handed an 18-month community order, and was ordered to complete 10 days of rehabilitation activity requirements.

He was also made the subject of a Sexual Harm Prevention Order and must sign onto the Sex Offenders Register for five years.

‘As soon as PSB received the complaint, Janga was suspended and a robust investigation was launched. We found that Janga had disregarded these expectations and behaved in a completely unacceptable manner – secretly filming colleagues in the toilet to fulfil his sexual desires.

‘This sentencing will be shortly followed by a misconduct hearing. This is normal procedure and will be led by PSB.

‘I’d like to remind the people of Greater Manchester that GMP’s Professional Standards Branch is committed to maintaining their trust and confidence by dealing with issues, such as this, openly and robustly.’

Brett Gerrity of CPS North West said: ‘Janga has invaded the privacy of these males by filming them whilst they used the toilet for his own depraved sexual gratification.

‘Janga denied the offences throughout the investigation and refused to accept his guilt in the face of the overwhelming evidence. The Jury rejected his fanciful story as to why he had filmed males using the toilet and convicted him based on the evidence presented by the prosecution.

‘I am grateful to the victims who gave evidence at trial and provided victim impact statements. I hope todays sentence will provide them with some comfort and reassure the public that the CPS will work with the police to build strong cases against sex offenders.’