Mexico City: Mexican President Andres Manuel Lopez Obrador showed off his popularity in comparison to other world leaders, saying the media did not want the public to know how much support he enjoys.

Asked during a regular news conference on Wednesday, local time, how confident he was heading into 2021, when Mexico holds legislative elections in June, Lopez Obrador said he was optimistic. Then he asked aides to project an ongoing survey of 13 world leaders' approval ratings. 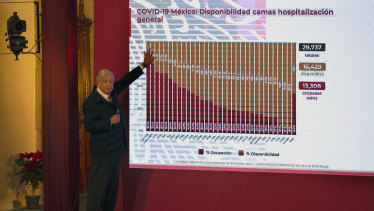 "It's not to show off," he said. "In the understanding that to me, power is humility, but at the same time, it's not bad for people to know," he added, arguing that most of Mexico's leading print and broadcast media did not want to publicise the poll.

As of December 22, Lopez Obrador scored 29, just ahead of Australian Prime Minister Scott Morrison, who had 27.

The Mexican president then guided viewers through direct comparisons between himself and some of the other heads of government in the survey, which showed Modi way out front with 55. French President Emmanuel Macron was last at minus 25. 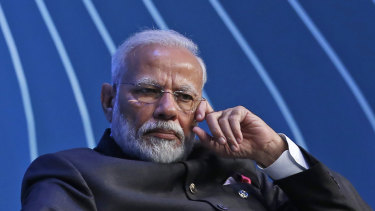 An astute communicator, the leftist Lopez Obrador won election by a landslide in 2018. Since then, his popularity has remained robust, even though he has fallen short of the goals he set on improving security and economic growth.

He has cultivated an antagonistic relationship with much of the media, accusing them of being sympathetic to his critics and "neo-liberal" economic policies he blames for Mexico's problems.

Earlier this week, he pretended he was going to scrap the daily morning news conferences he uses to answer criticism before revealing 40 minutes later he was joking.

Underscoring his brand of anti-corruption politics, Obrador also criticised a doctor had used his influence to have his family members cut in line for early coronavirus vaccines.

Obrador said the doctor used “influences to get the scarce vaccines, despite the fact that the first shots are reserved for front-line health-care workers. He called the move “immoral”.

He didn't specify what action might be taken against those involved, who were not identified, but said the case was under investigation and would be punished. Experts have expressed concern that theft, corruption or falsification could affect vaccination efforts in Mexico.

While the army was in charge of the site, it appears there may have been an error in the outside system used to set up appointments for the shot, creating confusion, in part because the vaccine has to be applied quickly after it is opened and unfrozen.

Mexico has received only about 50,000 doses of the Pfizer vaccine, not nearly enough to cover 1.4 million health care workers, though hundreds of thousands more doses are expected to arrive in coming weeks. 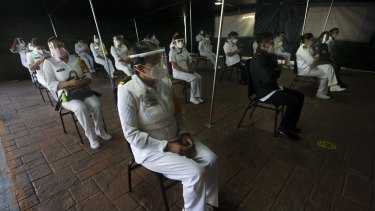 Mexican army health workers wait to be vaccinated against COVID-19 at the Central Military Hospital in Mexico City.Credit:AP

“A family that was not on the list to be vaccinated arrived and using influence, got vaccinated,” Obrador said, noting they included “a doctor, his wife and I think one or two of his daughters.”

It was unclear whether the doctor himself would have been eligible to get the vaccine, because he reportedly worked at a hospital treating COVID-19 patients. But his family clearly was not.

Vaccines are to be given first to health care workers, then to the elderly, those with chronic diseases and teachers, before being made available to the general population.

The incident occurred at a centre overseen by the army, which López Obrador has relied on to an unprecedented extent in his drive against corruption and favouritism because it is widely seen as being among the most professional, honest and trusted institutions in the country.