Southend-on-Sea, England: An underground chamber discovered accidentally by road workers between an Aldi supermarket and a pub, appears to be the site of the earliest Christian royal burial ever found in Britain.

The chamber, uncovered between a road and a railway line in the south-eastern English village of Prittlewell in 2003, turns out to be a 1400-year-old tomb, with archaeologists saying it's the most important Anglo-Saxon burial discovery in more than 70 years and equivalent of King Tutankhamun's tomb. 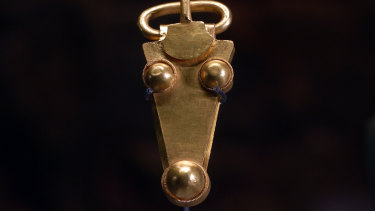 A golden belt buckle uncovered at an Anglo-Saxon burial site in the village of Prittlewell, England.Credit:AP

Treasures unearthed at the site include a golden belt buckle, the remnants of a harp-like instrument known as a lyre, gleaming glassware and an elaborate water vessel from the eastern Mediterranean, perhaps Syria.

Researchers say the luxury items indicate the chamber's occupant was a man of high standing, possibly a prince. Two small gold-foil crosses found at the head of the coffin suggest a Christian burial.

"There are luxury imports that have come from as far away as Syria. Some of the raw materials might have even come as far away as Sri Lanka and the Indian subcontinent," said Liz Barham, a senior conservator at Museum of London Archaeology who worked on the dig. 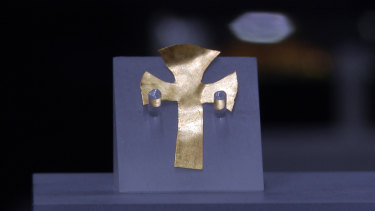 A gold foil cross believed to belong to Seaxa, brother of King Saebert, the first Anglo-Saxon king to convert to Christianity.Credit:AP

"This is a really rich burial. It's a statement, it's a theatrical statement being made about the family, about this person."

Sophie Jackson, director of research and engagement at Museum of London Archaeology, said the discovery is "our equivalent of Tutankhamun's tomb." While the identity of its occupant is unknown, locals have nicknamed him the "Prittlewell Prince." 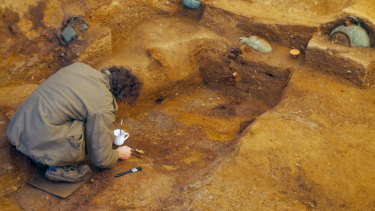 An archeologist works in an Anglo-Saxon Christian burial chamber at Prittlewell in Southend-on-Sea, England.Credit:MOLA/AP

Fragments of tooth enamel – the only human remains uncovered – revealed he was over 6 years old, and the size of the coffin suggests he was about 1.73 metres tall.

Jackson said the "best guess" is that it was Seaxa, brother of King Saebert, the first Anglo-Saxon king to convert to Christianity.

She said the burial came at a time when Christianity was vying in Britain with older pagan beliefs.

An artist impression of the tomb which contained 40 artefacts including treasures from other kingdoms in an Anglo-Saxon Christian burial chamber at Prittlewell.Credit:MOLA/AP

"They would have been just on the transition between having pagan burials with all your gear, but also having these crosses," she said.

The Anglo-Saxons were descendants of Germanic tribes who gradually invaded England by sea starting in the fifth century, after the collapse of the Roman Empire. They came to rule the country until the Norman conquest in 1066.

Dozens of artefacts will go on show on Saturday at Southend Central Museum, near the burial site and about 60 kilometres east of London.