A protester has been led away by police after holding up a sign that read ‘Abolish the Monarchy’ and ‘Not my King’ outside the Palace of Westminster this morning.

The woman held the sign in the air as police escorted her away from the gates of Parliament, where King Charles and the Queen Consort this morning received condolences from members of the House of Commons and House of Lords.

His Majesty also addressed Parliament for the first time in the near-1,000-year-old Westminster Hall – the ancient heart of the Palace of Westminster where his mother will lie in state from Wednesday evening for four days until her funeral next Monday.

But despite the wild cheers of ‘God Save the King’ as the new Monarch drove from Clarence House down The Mall this morning, one took the opportunity to show their opposition to the monarchy.

The woman protesting in Westminster wore a t-shirt emblazoned with the logo for the Campaign To Abolish The Monarchy, which yesterday called on people to protest the new King at Parliament Square this morning. 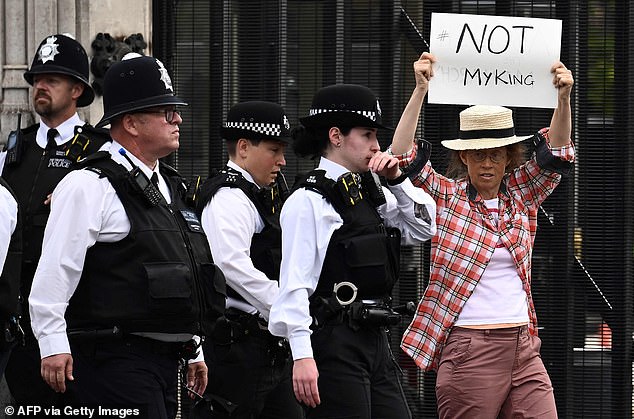 A woman protested the new King outside Parliament this morning, holding a sign that read ‘Abolish the Monarchy’ on one side and ‘Not my King’ on the other

A number of Met Police officers led the woman away, while people took photos and videos. One man engaged with the protester but it is unclear if he was criticising her or showing his support.

Yesterday a proclamation of ‘God Save the King’ was met by boos from a small group of protesters in Edinburgh, as crowds gathered to hear the Lord Lyon King of Arms, who is responsible for overseeing state ceremonial in Scotland, formally announce the Queen’s successor.

Another loud boo could be heard after the anthem as the Lord Lyon led three cheers of ‘hip, hip hooray’, sparking outrage amongst others in the crowd, with someone shouting back ‘Oh shut up’.

One onlooker told Edinburgh Live: ‘I was absolutely disgusted by the behaviour of some people in the crowd. 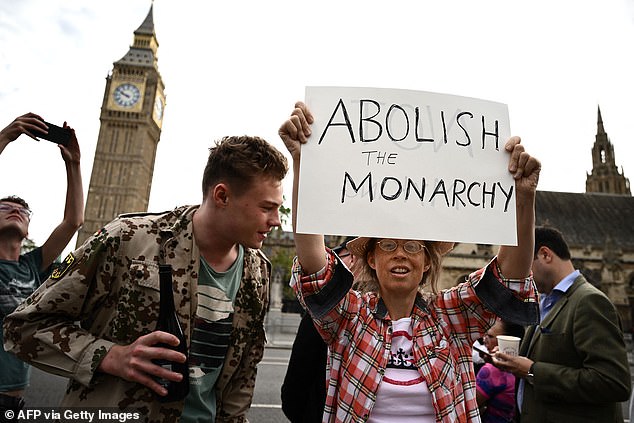 The woman wore a t-shirt emblazoned with the logo for the Campaign To Abolish The Monarchy, which yesterday called on people to protest the new King at Parliament Square this morning 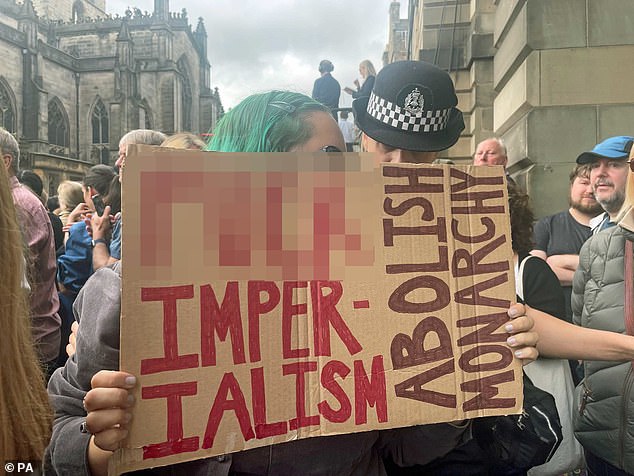 One anti-monarchist protestor, holding a sign that said ‘f*** imperialism, abolish the monarchy’ was arrested outside St. Giles’ Cathedral, Edinburgh in connection with a ‘breach of peace’, Police Scotland said

‘It was meant to be a joyful occasion to mark the new King but there was petty people booing.

People could also be heard calling for a republic and a few individuals held up signs critical of the monarchy.

On Sunday morning, Our Republic, a Scottish campaign group that believes the monarchy should be ended, encouraged those with objections to the proclamation to ‘make those clear’.

John Hall, 33, who is the treasurer of the anti-monarchy campaign group told NBC News: ‘We wanted to make it clear that there’s more than one viewpoint in Scotland.

‘I wanted to make sure that I made it clear I didn’t consent to this pageantry.’ 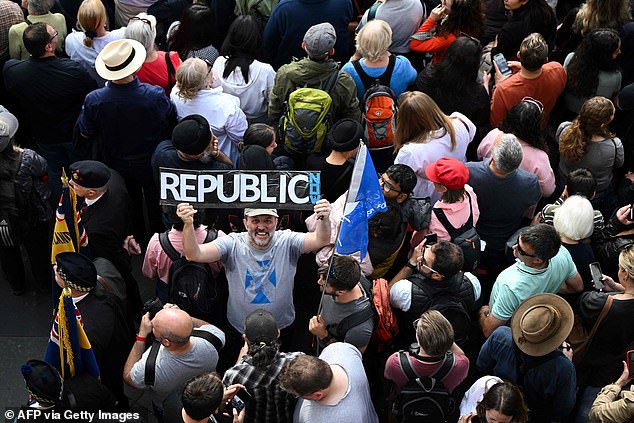 Amongst the hundreds of royal fans who had turned out to watch the ceremony in Edinburgh, a small number took the opportunity to make clear their disapproval of the new monarch

As police took her away the crowd applauded, with one person shouting ‘have some respect’ at the republican.

A Police Scotland spokesperson said: ‘A 22-year-old woman was arrested outside St. Giles’ Cathedral, Edinburgh on Sunday, 11 September, 2022 in connection with a breach of the peace.’

And another anti-monarchy protester says he was arrested in Oxford after voicing his opposition to the new King Charles III.

Symon Hill said in a tweet that he shouted ‘Who elected him?’ and was led away, handcuffed and put in the back of a police van before being de-arrested.

A spokesperson for Thames Valley Police said: ‘A 45-year-old man was arrested in connection with a disturbance that was caused during the county proclamation ceremony of King Charles III in Oxford.

‘He has subsequently been de-arrested and is engaging with us voluntarily as we investigate a public order offence.

‘The man was arrested on suspicion of a public order offence (Section 5 Public Order Act).’