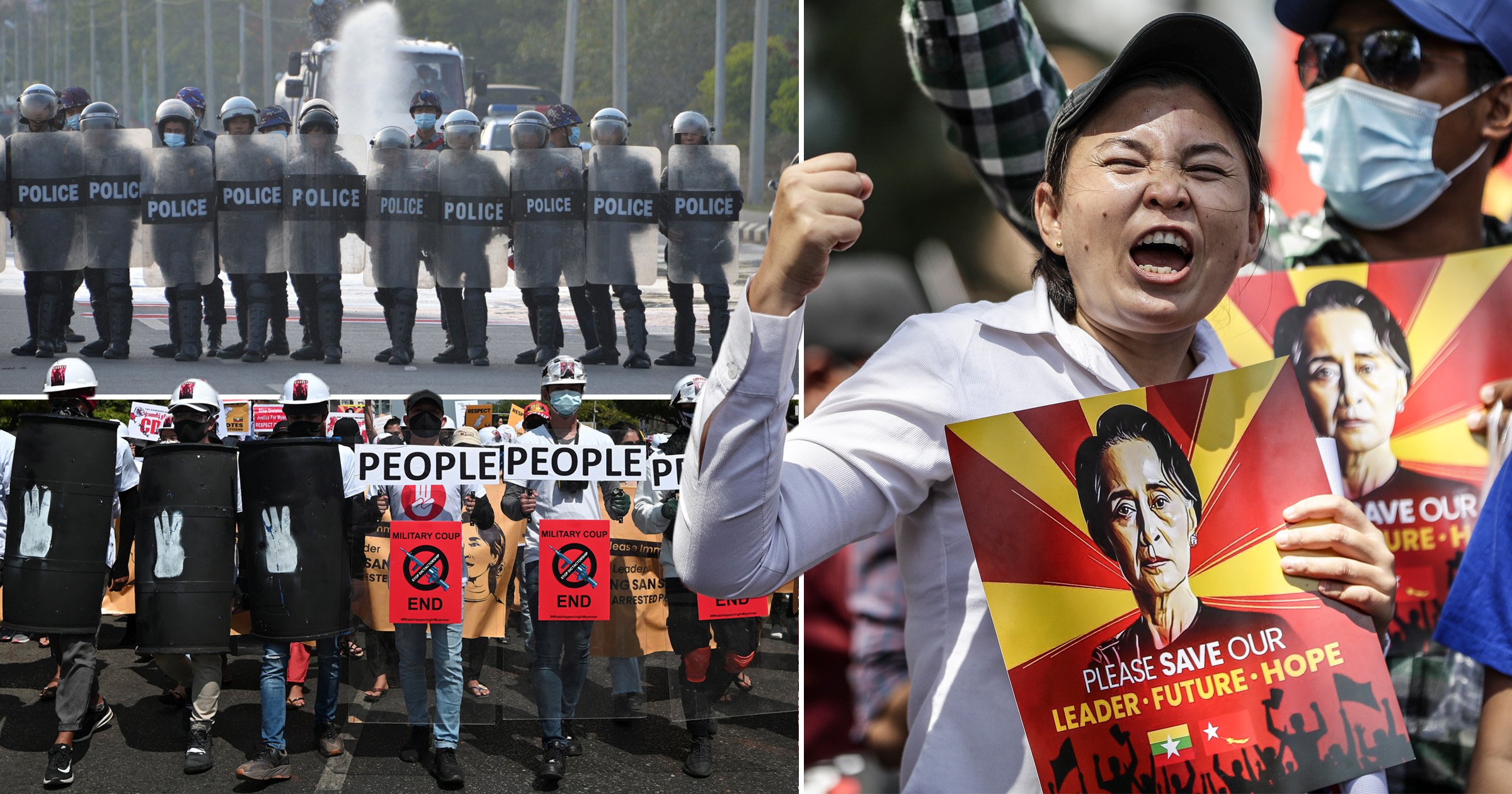 A young activist in Myanmar says he feels ‘energised’ to oppose the military junta despite fears it will pursue a bloody crackdown.

He risks detention, up to 20 years in jail and being attacked by armed police as he continues to join opposition to the February 1 coup.

He was part of the ‘broken down car protest’ today, where tens of thousands of demonstrators spilled onto the streets in Myanmar’s main city, Yangon.

The biggest show of public opposition so far brings fears of provoking a brutal military crackdown in the country, also known as Burma.

The 23-year-old, who does not want to be named for fear of reprisals, is taking part in a civil disobedience movement and says there is no alternative but to show resistance on the streets and through social media.

He joined joined crowds in his home city as key junctions were blocked by cars whose owners lifted the bonnets up to pretend they had broken down in an effort to obstruct the military’s vehicles.

The activist’s parents took part in smaller rallies elsewhere in the city.

He told Metro.co.uk: ‘The march was very crowded and energetic, all kinds of people and communities showed up.

‘Part of it made me feel hopeful that there are so many people united. But on the other hand, the fact that we’re all marching together is a grim reminder of the injustices that exist, the work that is ahead of us and other parts of the country who are facing a more violent oppression.

‘We were energised by each other but I felt a bit sad too and I’m sure there are others who felt this sentiment.’

Dubbed ‘road blocking day’, the rally came amid warnings by the UN’s Special Rapporteur, Thomas Andrews, that there is ‘potential for violence on a greater scale’ if the military moves to quash the opposition movement.

The protester said: ‘Buildings have been raided by the military and it’s very tense, they can come in your home and arrest you without a warrant and if you are in a small group you could be targeted and arrested.

‘But the civil disobedience movement has united people and we have been going to places where public sector workers are, such as banks and customs offices, trying to get them on our side.

‘If I’m not doing that I’m trying to create content for the protest movement and to encourage self-care to make sure people don’t get burnt out, because it’s going to be a long, long fight.’

The protester said a 19-year-old woman protesting peacefully had been fatally shot by the security services and that thousands of prisoners released by the new rulers were posing a security threat to neighbourhoods in the south-east Asian country.

He claimed they had used Molotov cocktails to set fire to buildings and were acting as hired thugs on the military’s orders.

The dissenter said the crackdown was far more violent outside Yangon, which he believes is relatively shielded due to is embassies and international profile.

After taking part in civil disobedience during the day, he takes turns with neighbours working night shifts at entry points to their community, despite being unarmed and in breach of a curfew imposed the military.

The man said: ‘The way the police have suppressed the protests in other towns and cities has become much more violent and brutal.

‘After the 19-year-old girl was shot it’s been strange and terrible. People my age were already working out what to do with our lives and now this.

‘We don’t have any weapons and we’re just doing all we can peacefully, being much more careful about how we protest.

‘The military can come into our homes at any time without a warrant and arrest us and they are trying to enact a cyber law that gives them full permission to access our user data, so there will be full surveillance with no privacy. It’s a dictatorship.

‘It’s not so much about winning but there’s so much at stake, it’s about the whole country, we have to do something and we know the military is sensitive to international pressure. What else can we do? I feel determined to keep fighting.’

The activist, who speaks perfect English, described the prospect of confronting troublemakers during the nightly vigils, which has happened to other volunteers in his neighbourhood.

‘It is scary but we have to make sure we don’t act out of fear and aggression,’ he said.

‘There’s no point in resisting if we are going to be the same as the aggressors.’

The activist’s family, who include another son living and working in the UK, had hoped the country was making progress as a fledgling democracy under figurehead Aung San Suu Kyi, who was first elected in 2015.

Ms Suu Kyi, 75, was apparently taken from her bed in the early hours under the orders of military chiefs.

While the political activist was not president – due to a clause in the constitution blocking the move because she has children who are overseas citizens – she was widely viewed as the de-factor leader.

She had returned to her State Counsellor role after a landslide election victory in November 2020 that had been contested by the military, which has a key role in the political framework.

Her party, the National League for Democracy, has remained popular domestically, despite her reputation being tarnished overseas when the Rohingya Muslims were displaced by military operations in 2017.

Protesters now face a 20-year jail term for obstructing the armed forces as the junta uses draconian measures to quell opposition to its takeover.

The regime has also repeatedly shut down the internet to try and stifle the opposition.

The military said yesterday that Ms Suu Ki was in ‘good health’ and denied it had carried out a coup, insisting its actions were constitutional.

A spokesperson told a press briefing that elections were planned and said: ‘To ensure democracy and prosperity, people should cooperate with us without being emotional.’