Seattle: A leader of the Proud Boys, the far-right organisation emboldened by Donald Trump during the first US presidential debate, said he was encouraged by the President's comments.

Trump avoided condemning far-right and white supremacist groups when asked by moderator Chris Wallace, instead saying as part of his answer after rival Joe Biden mentioned the group: "Proud Boys, stand back and stand by".

Joe Biggs, a Florida-based organiser for the male-only group known for street violence, said in a phone interview that the group's mission was to combat left-wing insurrection in the increasingly volatile culture wars leading to the November election. 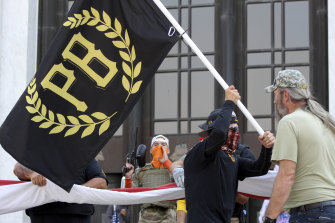 A protester carries a Proud Boys banner in front of the Oregon State Capitol in Salem. Credit:AP

Biggs, who helped organise a rally in Portland, Oregon, on Saturday, said that condemning the social justice protests erupting nightly in that city was key to his group's national strategy of thwarting Black Lives Matter and the leftist, anti-fascist movement known as antifa. Members of the Proud Boys, considered a hate group by organisations that track the far-right, have battled leftists there repeatedly in the last few years.

"Portland is the main centre of insurrection around the country," Biggs claimed, adding that his members were prepared to return "if we continue to see these insurrections going unchecked."

The statement by Trump – who said antifa and left-wing activists were a mounting threat to American cities – was celebrated on social media channels frequented by neo-Nazis and white supremacists. Commenters regarded the President's remark as an endorsement and a call to action.

Trump sought to walk back his statement on Wednesday after criticism from fellow Republicans. "I don't know who the Proud Boys are," he said, responding to a reporter's question on the White House lawn before departing on a campaign trip to Minnesota. "I can only say they have to stand down, let law enforcement do their work." 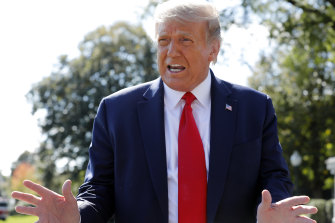 US President Donald Trump claimed to be unfamiliar with the Proud Boys, after name checking the group during the first presidential debate.Credit:Bloomberg

Started in 2016 by Vice Media co-founder Gavin McInnes as a "men's drinking club", the Proud Boys bills itself as a group of "Western chauvinists" who believe in free speech, gun rights and closed borders and oppose racial guilt and political correctness. They have become a mercurial, hard-to-define, flag-waving shock force for conservatives.

'Proud Boys have carved out this niche for themselves as both this right-wing fight club and a volunteer security force for the GOP.'

The group has organised rallies in Portland and other cities, calling on police to be more aggressive against left-wing activists. Members of the group participated in a pro-Trump truck caravan that turned violent in downtown Portland on August 29, when a follower of another right-wing group, Patriot Prayer, was fatally shot.

Joanna Mendelson, associate director of the Anti-Defamation League's Centre on Extremism, said the Proud Boys was an unconventional far-right faction, bragging of a membership representing a range of ethnic backgrounds. 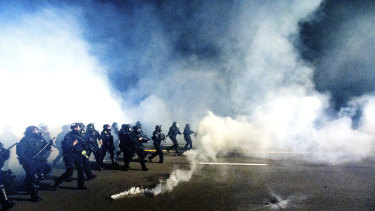 Police use chemical irritants and crowd control munitions to disperse protesters during a demonstration in Portland, Oregon. Credit:AP

Biggs would not comment on how many members the Proud Boys had. A recruiting website of the organisation features a "win an assault weapon" offer, saying that "we understand that some patriots are unable to afford adequate weaponry, therefore we're giving away a chance to win a FN SCAR 20S" semi-automatic rifle.

Biggs said the Proud Boys had no plan yet for election day, when Trump has called on supporters to watch polling places for potential fraud. Biggs said he would accept the result if the President were defeated. He said that if left-wing protest abated, he would welcome staying home with his family, riding his motorcycle and going to the beach, and seeing Proud Boys return to a drinking club.

Biggs denied his group was racist, saying it included blacks, Cubans, Asians, gays and transgender members. "I've never come into Portland and tried to burn a federal building or shoot and kill anyone or try to run anybody over with a car," he said, "so I think it's kind of funny that we get called the bad guys."

Meanwhile, in Portland on Wednesday, police arrested Alan Swinney, a regular at Proud Boys rallies, on suspicion of a dozen criminal counts including assault, menacing and unlawful use of mace and a weapon.

According to an indictment, Swinney, 50, of Texas, pointed a revolver at someone in a crowd of anti-fascist protesters during a Proud Boys rally and used a paintball gun to injure someone.

Our weekly newsletter will deliver expert analysis of the race to the White House from our US correspondent Matthew Knott. Sign up for the Herald‘s newsletter here, The Age‘s here, Brisbane Times‘ here and WAtoday‘s here.