Putin orders his men NOT to storm 'liberated' Mariupol steelworks

Putin orders his men NOT to storm Mariupol steelworks – and declares the city ‘liberated’: Soldiers are told to ‘blockade’ the complex which is housing thousands of Ukrainians

President Vladimir Putin on Thursday ordered the Russian military to cancel plans to storm a Mariupol steelworks, and declared the port city ‘liberated’.

Instead of launching a final assault on the Azovstal steel plant – the last bastion of Ukrainian resistance in the devastated coastal city – he said he wanted his forces to continue to securely blockade the complex instead.

Putin gave the order to Sergei Shoigu, his defence minister, who had previously told Putin that more than 2,000 Ukrainian fighters were still holed up in the vast plant, which has a sprawling underground component to it.

‘I consider the proposed storming of the industrial zone unnecessary,’ Putin told Shoigu in a televised meeting at the Kremlin. ‘I order you to cancel it.’

After Shoigu told him Moscow controlled the city – apart from the Azovstal steel plant – Putin hailed the ‘successful liberation’ of Mariupol.

He said his decision not to storm the steelworks was motivated by the desire to safeguard the lives of Russian soldiers.

‘There is no need to climb into these catacombs and crawl underground through these industrial facilities,’ he said. ‘Block off this industrial area so that a fly cannot not pass through.’

Putin also called on the remaining Ukrainian fighters in Azovstal who had not yet surrendered, saying Russia would treat them with respect and would provide medical assistance to those injured.

Leaving the plant in Ukrainian hands, however, robs the Russians of the ability to declare complete victory in Mariupol. The city’s capture has both strategic and symbolic importance.

This is a breaking news story. More to follow… 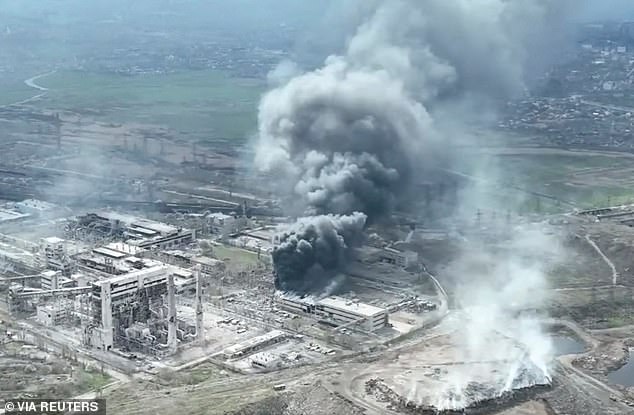 President Vladimir Putin on Thursday ordered the Russian military to cancel plans to storm a Mariupol steelworks. Pictured: Smoke rises above Azovstal steelworks, in Mariupol, Ukraine, in this still image obtained from a recent drone video posted on social media 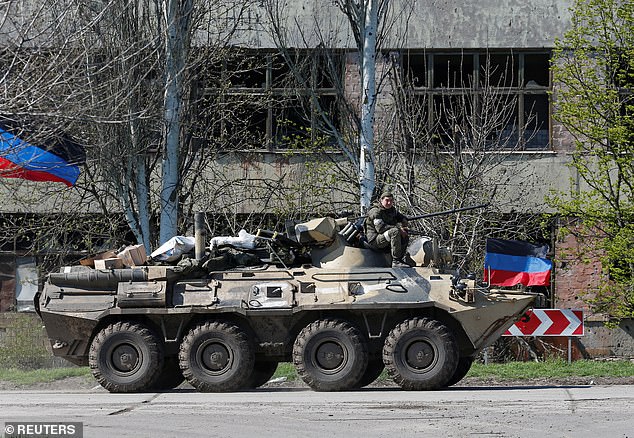 A service member of pro-Russian troops is seen on an armoured personnel carrier as evacuees board buses to leave the city during Ukraine-Russia conflict in the southern port of Mariupol, Ukraine April 20, 2022

Russia sent tens of thousands of troops into Ukraine on February 24 in what it called a special operation to degrade its southern neighbour’s military capabilities and root out people it called dangerous nationalists.

Ukrainian forces have mounted stiff resistance and the West has imposed sweeping sanctions on Russia in an effort to force it to withdraw its forces.

Since the invasion began, tens of thousands of civilians are believed to have been killed in Mariupol, which has been indiscriminately targeted by Russian shelling.

Investigations are on-going into war crimes in the city, with two attacks – one on a maternity wards and another on a theatre where hundreds of civilians were taking shelter at the time – of particular focus.

Meanwhile, Ukrainian officials said Thursday that only four busses with civilians managed to escape from Mariupol after several unsuccessful attempts.

Another attempt to evacuate civilians from Mariupol will be made Thursday, Ukraine’s Deputy Prime Minister Iryna Vereshchuk said. 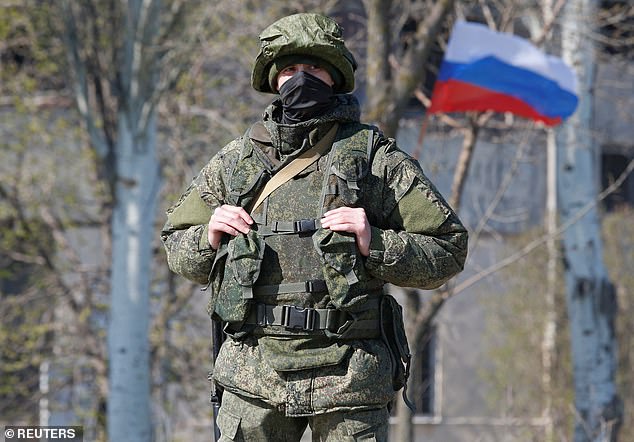 A service member of pro-Russian troops stands guard as evacuees board buses to leave the city during Ukraine-Russia conflict in the southern port of Mariupol, Ukraine April 20, 2022 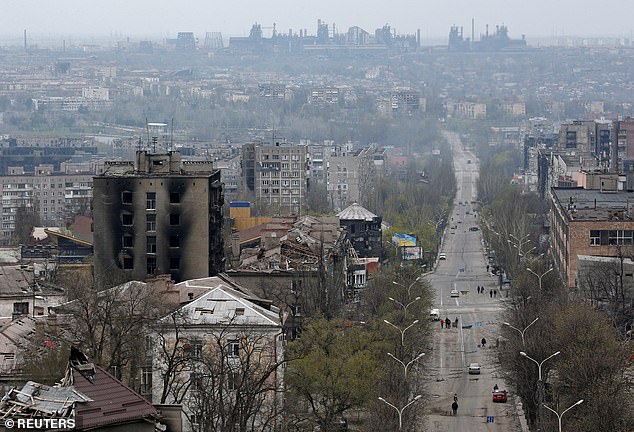 A view shows damaged buildings, with the Azovstal Iron and Steel Works plant in the background, in the southern port city of Mariupol, Ukraine April 19, 2022

In Kyiv, Spain’s Prime Minister Pedro Sanchez and Denmark’s Mette Frederiksen became the latest European leaders to show support with a visit to the capital.

They were due to meet with President Volodymyr Zelensky, who warned in a video address overnight that the Russians were not ‘abandoning their attempts to score at least some victory by launching a new, large-scale offensive.’

‘The West stands together to support the Ukrainian people,’ Frederiksen, the Danish prime minister, said in a statement.

Meanwhile, the Kremlin said it submitted a draft of its demands for ending the war, and the West raced to supply Ukraine with heavier weapons to counter the Russians’ new drive to seize the industrial east.

Britain’s Defense Ministry said in an assessment that Russia likely desires to demonstrate significant successes ahead of its annual May 9 Victory Day celebrations. ‘This could affect how quickly and forcefully they attempt to conduct operations in the run-up to this date.’

As fears grew for the fate of civilians in Mariupol, the Kyiv regional police said Thursday that two mass graves with nine bodies were discovered in the city of Borodyanka, northwest of the capital.

The findings added to thousands of civilians reported killed by Russian forces, who have been accused of wholesale abuses of Ukrainians.

Head of the Kyiv regional police, Andriy Nebytov, said two women and a teenager were among the ‘civilians killed by the Russian occupiers.’

‘I want to stress that these people are civilians. The Russian military deliberately shot civilians that didn’t put up any resistance and didn’t pose any threat,’ Nebytov said, adding that some of the victims were apparently tortured.