Rachel Smith has an extra reason to dread winter. When it’s cold, her body overreacts, narrowing the blood vessels in her extremities so much that they turn deathly pale — a condition known as Raynaud’s disease.

When Smith has an attack, her fingers become white, then yellow and eventually blue. Her toes and ears do the same. If she tries to grab something with her hand, she can’t feel it. But eventually the pain comes.

“It feels like the tingling when your hand falls asleep, but magnify that by a thousand,” Smith, 35, who lives in Sacramento, California, tells TODAY.com.

“The ears are the worst. If I know I’m going to be outside, and it’s cold or windy, I have to have a beanie. I’ve described it as someone putting a knife in my ear and turning it. It’s very painful.”

Any type of cold can be a trigger, so Smith has to be careful about reaching into the freezer, holding a chilled drink in her hand or relaxing in an air conditioned room in the summer. No matter where she goes or what time of the year it is, she always packs a jacket or a blanket in her car and gloves in her purse.

“I hate when people just brush it off as ‘You’re just extra sensitive to cold,’” she says. “It’s a legit disease.”

The condition, which can be a disease, syndrome or phenomenon, causes blood vessels to narrow in response to cold or stress so that little or no blood flows to the affected body parts — most commonly the fingers and toes, according to the National Heart, Lung and Blood Institute.

About 5% percent of the U.S. population has the condition. It’s more common in women than in men. A 24-year-old woman’s case was featured in the Postgraduate Medical Journal. 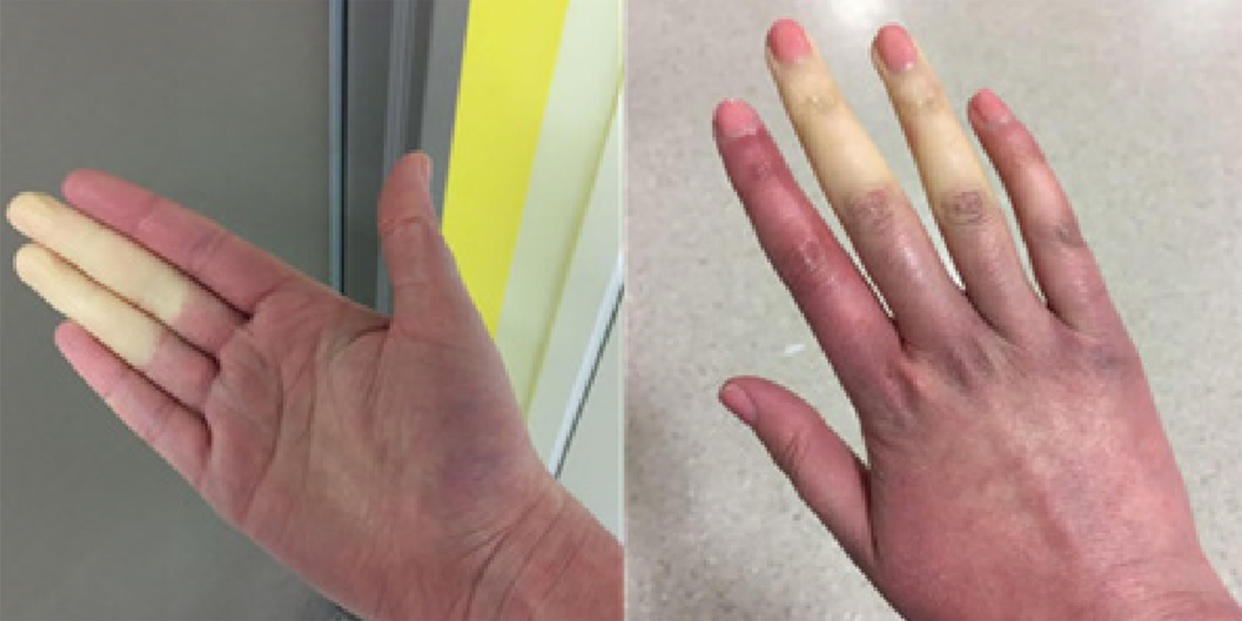 “It’s an exaggerated response of the body to cold,” says Dr. Ashima Makol, a rheumatologist at the Mayo Clinic in Rochester, Minnesota.

“With cold exposure, the body is trying to pull blood towards the core and it wants to supply blood to the core organ systems, like the heart and the lungs, so the extremities suffer in the process.”

Primary Raynaud’s — also called Raynaud’s disease — happens on its own and patients first notice the distinctive color changes in their teens or 20s. This is the type Smith was diagnosed with after spotting the symptoms in 8th grade.

Secondary Raynaud’s — also known as Raynaud’s phenomenon — happens because of an underlying disease or other factor. Most scleroderma patients develop it, for example, Makol says. People with lupus and rheumatoid arthritis can also experience Raynaud’s.

The cause of primary Raynaud’s isn’t known.

Secondary Raynaud’s is linked to diseases and conditions that directly damage the arteries, the National Heart, Lung and Blood Institute noted. People who work with a jackhammer, drill or other vibrating instruments can also develop the condition, Makol said. Medications, including beta blockers, can cause it, too.

How is it diagnosed?

The “impressive color change in your fingers” means Raynaud’s is very easy to self-diagnose, Makol said.

From there, a doctor can determine whether it’s primary or secondary Raynaud’s, which is done with the help of patient history, a physical and additional tests like a nailfold capillary exam.

What are the complications?

How is it treated?

The treatment depends on the severity of the symptoms.

The condition “can be mild and manageable… or it can be very severe: multiple episodes a day with each episode lasting up to 15 to 20 minutes. During that time, you can imagine how painful and discomforting that is,” Makol says.

More aggressive treatment includes medications such as calcium channel blockers, which dilate the blood vessels, Makol notes. The drug Sildenafil, which is also the active ingredient in Viagra, can also help.

But patients with mild episodes are simply encouraged to keep their core body temperature warm and use gloves and hand warmers. That’s how Smith deals with her condition, wearing a hoodie year-round and investing in heated gloves that she keeps in her purse “24/7, 365.”

“Winter is not my friend,” she says. “I always have to be prepared for the cold.”

This article was originally published on TODAY.com