‘Cowardly’ Boris COULD have made it back to London to face Commons’ sleaze showdown: Furious Red Wall Tories demand he apologises after ghosting Parliament as pictures emerge of PM boarding train that arrived in time for debate

Boris Johnson is facing fresh Tory demands to make a personal apology for the Owen Paterson sleaze shambles today with Red Wall MPs insisting he should know ‘right from wrong’.

The PM is at the mercy of a storm over the extraordinary bid to save his all from punishment for lobbying, with outrage that he ghosted an emergency Commons debate on the row last night.

Instead he travelled 300 miles to Northumberland, near the Scottish border, on a visit to a hospital that No10 claimed was ‘long-planned’. Even so pictures suggest Mr Johnson still managed to get back to London in time to have come to the House, but chose not to.

In a brief interview from Hexham, a bad-tempered premier refused to say sorry and also stoked rising anger by suggesting there was ‘not much more to say’ on the controversy.

Deputy PM Dominic Raab also tried to turn the tables on Labour in interviews this morning, saying Keir Starmer should not be ‘politicising’ the situation.

But sent to take the brunt of the backlash in parliament, Cabinet Office minister Steve Barclay struck a notably different tone, expressing ‘regret’ and admitting it had been a ‘mistake’ to link reform of Parliament’s anti-sleaze rules to Mr Paterson’s case.

A series of Conservative MPs took to their feet to condemn the behaviour of the government and Mr Johnson himself.

Former Tory chief whip Mark Harper said: ‘If the team captain gets it wrong I think he should come and apologise to the public and this House. That’s the right thing to do in terms of demonstrating leadership.’

Worryingly for the PM, members of the 2019 intake – often seen as owing their careers to his electoral landslide – added their voices to the criticism.

Mark Fletcher, a Tory member of the standards committee that recommended Mr Paterson be suspended for 30 days, said he ‘would have been found to have broken the rules under any process you could create’.

The Bolsover MP said the ‘vast majority of colleagues on all sides of this House are desperate to stay within the rules and are well intentioned’.

He added: ‘But for those who do break the rules, the punishment must be fitting. I had no problem voting for the report that was discussed last week, I would do the same again today.

‘I say with the greatest of respect to those colleagues that I think that two years here is more than enough to know the difference between right and wrong.’

The government is still far from out of the woods, with Labour standards committee chair Chris Bryant adamant that MPs must still vote formally to approve its report on Mr Paterson’s activities.

Meanwhile, Mr Johnson appears to have bolstered his No10 team amid fears it is ‘failing’, bringing back former close aide Ben Gascoigne as a deputy chief of staff. 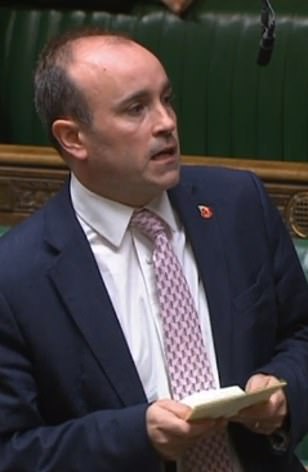 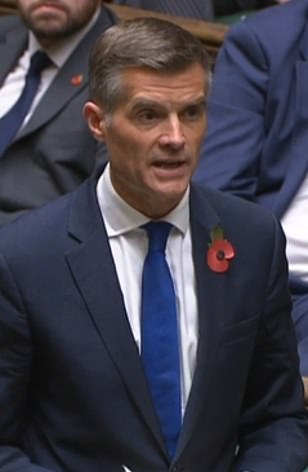 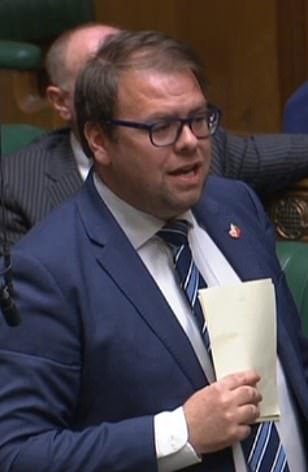 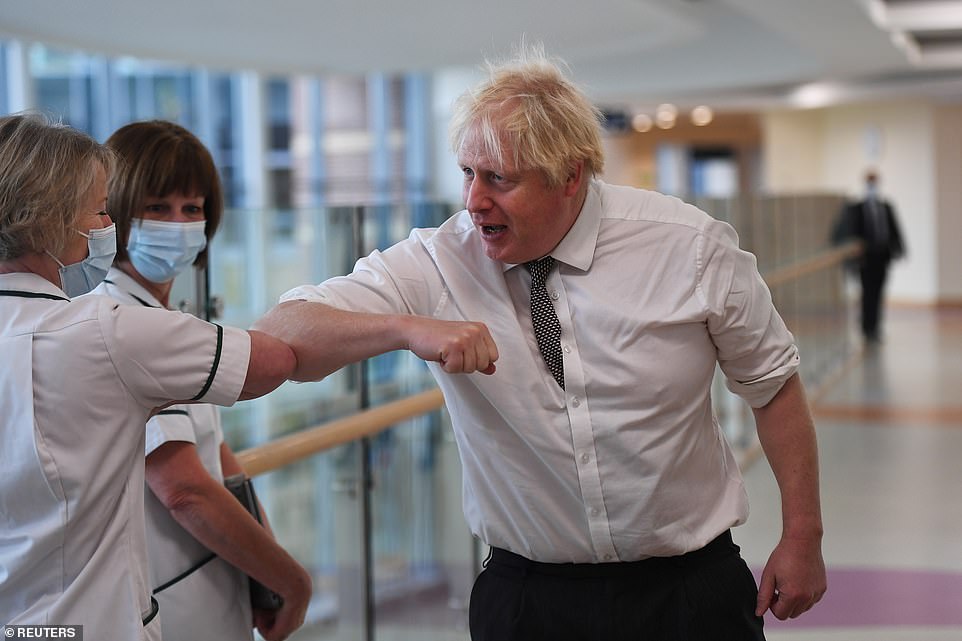 Instead of attending the Commons debate, Boris Johnson travelled 300 miles to Northumberland, near the Scottish border, on a visit to a hospital (pictured) that No10 claimed was ‘long-planned’ 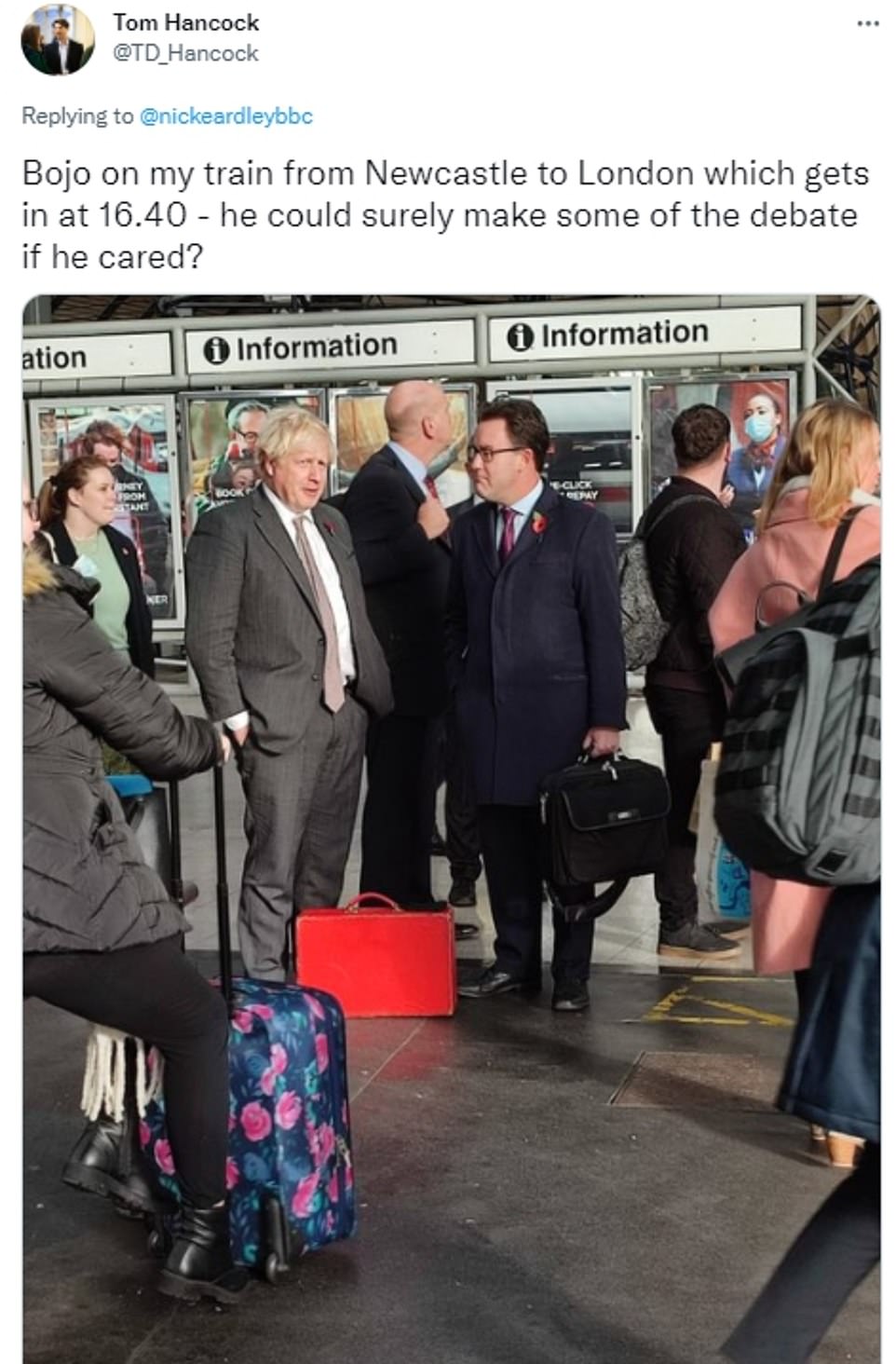 Pictures suggest Mr Johnson still managed to get back to London in time to have come to the House, but chose not to 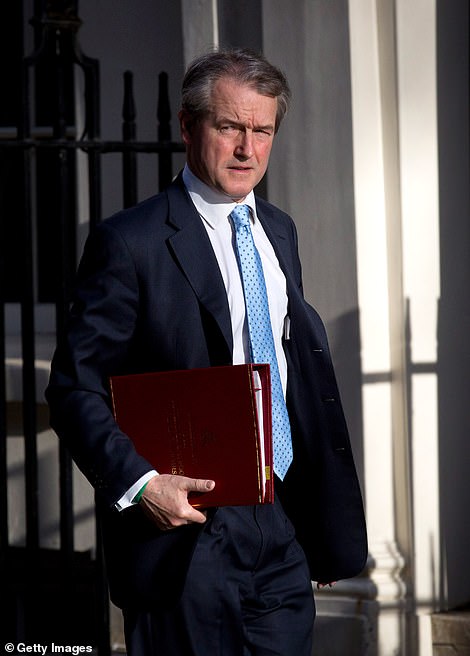 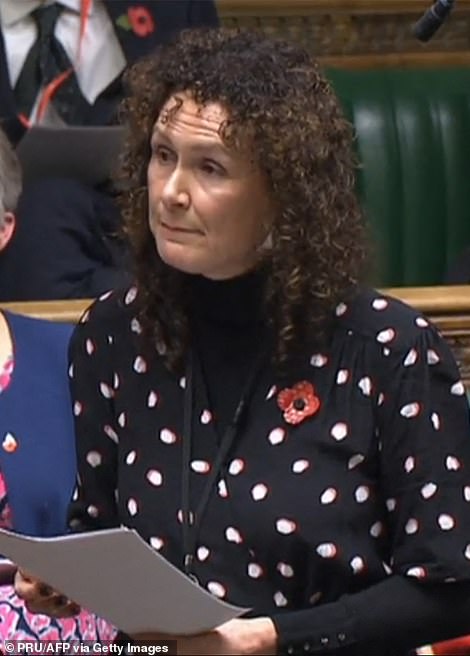 MPs traded blows about their second jobs – with Tory Geoffrey Cox under fire for his extraordinary £1million a year legal earnings.

Politicians are pointing fingers at each other over their paid sidelines in the wake of the bitter row over Boris Johnson’s abortive bid to save ally Owen Paterson from punishment for lobbying.

The PM said this morning that he expected outside income for MPs to be ‘looked at’ – with the standards committee set to make recommendations before Christmas.

Labour is pushing for paid directorships and consultancy roles to be banned – although Keir Starmer says nurses and other professions should be allowed to continue.

But the Tories have pointed out that a number of Opposition MPs also have some outside earnings alongside their salaries of around £82,000 a year.

Mr Cox, an eminent QC, has long been one of the biggest earners in the Commons.

In the latest register of interest, the Torridge and West Devon MP revealed that from this month he is receiving £400,000 a year plus VAT for 41 hours’ work a month as Consultant Global Counsel to Withers LLP.

Aaron Bell, one of 50 Tory MPs to defy a three-line whip on the issue last week, said colleagues had been placed in an ‘invidious position’ by the Government.

Mr Bell said he feared the ‘overzealous application’ of loyalty from Mr Paterson’s allies had help lead the Commons ‘into the extremely unfortunate decision it took last Wednesday’.

He said he is ‘proud’ to be part of the 2019 intake of Conservative MPs, dubbed the ‘109’, adding: ‘There is nothing like a shared experience to bond people together and I think we’ve all been through quite the experience over the last two years.

‘I know many of my friends within that group have endured a miserable time since last Wednesday’s vote.

‘I know many wished they had chosen to vote differently and are beating themselves up about that, but I say to them that loyalty to one’s party is also an admirable trait. This place, indeed our entire political system, couldn’t function without that either.

‘But the reality is that my friends should not have been put in such an invidious position.’

Mr Bell quoted a WhatsApp message sent by Conservative MP Jill Mortimer, who was elected to represent Hartlepool in May.

He told the House: ‘She said ”this was a colossal misjudgement, it should not have been whipped, you should have been allowed to vote with your conscience on this”.

‘I couldn’t agree more and I hope the Treasury bench is listening. Let us return to the convention where House business is not whipped.’

On rebelling, Mr Bell said: ‘It churns you up beforehand and leaves you a little shell-shocked afterwards.

‘Perhaps next time it will be easier.’

Conservative MP Andy Carter, another member of the Standards Committee, defended its decision on Mr Paterson but acknowledged some parts of the standards system are ‘confusing’.

He said: ‘I do have concerns that the current set of rules and codes are complicated, although, I’m afraid, not the system that is related to paid advocacy. That, I’m afraid, is very straightforward.’

Mr Raab told BBC Breakfast today that everyone should be working for a ‘robust’ standards system.

‘I don’t think the politicisation by the Labour Party, given how much money that they take from the unions, is a particularly attractive look for Keir Starmer,’ he said.

‘I think we ought to actually be coming together to make sure that there’s public confidence in our institutions, including how we do our job as MPs, and that we’ve got a robust system for complaints or impropriety, but also a fair system. That’s what we should all be working towards.’

During his visit to Hexham General Hospital yesterday, Mr Johnson refused to be drawn on the chaotic events of last week. Asked whether he would apologise, the PM said: ‘I don’t think there’s much more to be said about that particular case, I really don’t.’

One Tory MP last night told The Daily Mail he was close to sending in a letter of no confidence in Mr Johnson’s leadership – the first step towards a possible contest to replace him. The MP said: ‘This is resonating with the public and I have had enough of it. Boris is not going to change, so we are going to trundle on until there is a critical mass to get rid of him.’

Commons Speaker Sir Lindsay Hoyle said MPs now had to ‘sort out the mess we’re in’. Mr Barclay said there was a legitimate case for reforming the Commons standards system, but acknowledged the Government had been wrong to link it to Mr Paterson’s case.

‘I’d like, first and foremost, to express my regret and that of my ministerial colleagues over the mistake made last week,’ he said.

Labour leader Sir Keir Starmer said the PM was ‘running scared’ having given ‘the green light to corruption’ by arguing that rules to stop vested interests did not apply to his friends.

‘He does not even have the decency either to defend or to apologise for his actions,’ he said. ‘His concern, as always, is self-preservation, not the national interest.’

Tory MPs were whipped to vote last week to create a new committee to reform the anti-sleaze rules, only for the Government to backtrack after the Opposition parties refused to cooperate.

In the bitter aftermath of the row, Mr Paterson, who denies wrongdoing, announced he was quitting as MP for North Shropshire blaming the ‘cruel world of politics’.

It followed a recommendation by the Commons Standards Committee that he should be suspended from Parliament for six weeks after committing an ‘egregious’ breach of the centuries-old ban on paid lobbying by MPs. 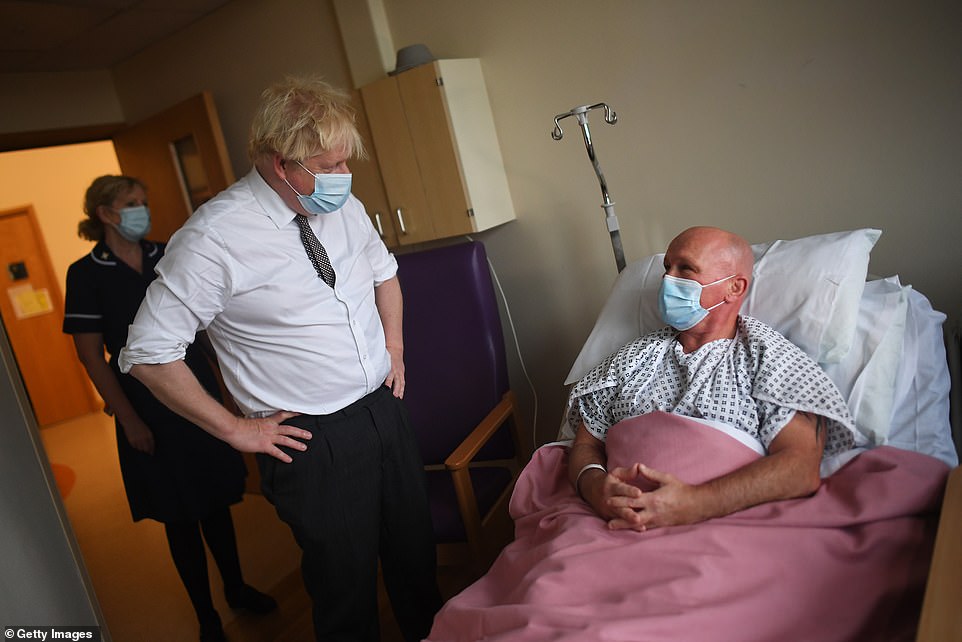 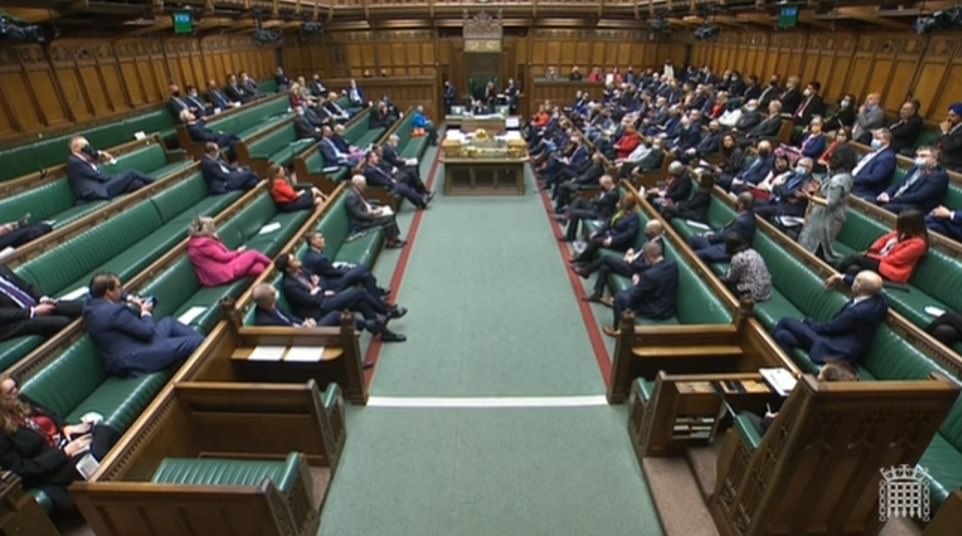 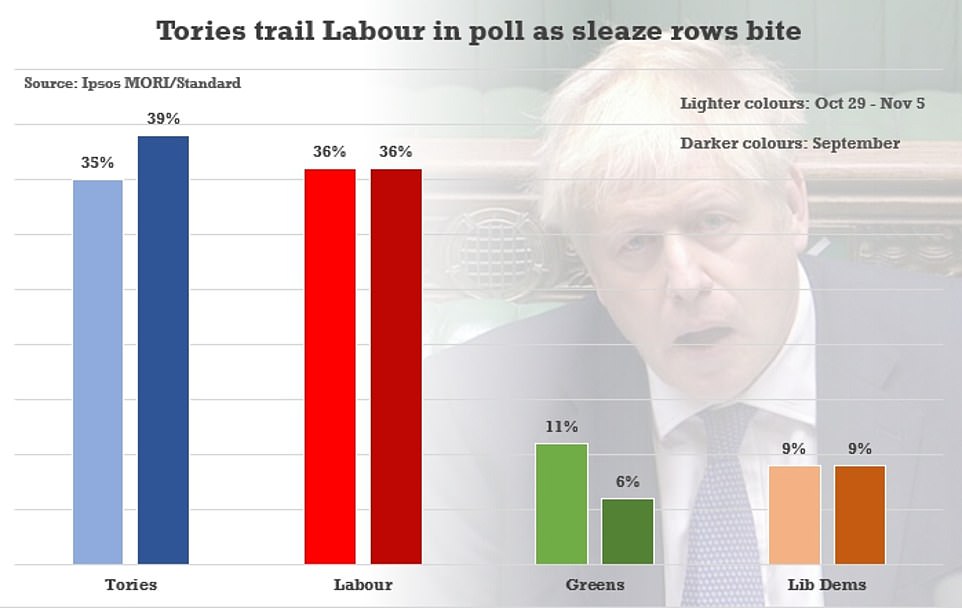 The debacle over the Owen Paterson report was far from the first time Boris Johnson has clashed with Commons standards commissioner Kathryn Stone.

And their relationship is unlikely to get easier, as he could face another probe by the watchdog into the ‘Wallpapergate’ controversy over refurbishment of his grace-and-favour flat – as well as his refusal to declare his recent ‘freebie’ Marbella holiday on the parliamentary register .

But he was saved from punishment – which could have included being the first serving premier to be suspended from the Commons, by MPs who overturned her ruling.

She has also pulled him up over an ‘over-casual attitude’ to declaring his own personal financial interests to Parliament, including a six-figure stake in an English country mansion.

Mr Johnson was dramatically cleared in the summer of breaking Commons rules over a ‘freebie’ trip to the millionaire’s playground of Mustique with Carrie – despite Ms Stone condemning his behaviour and the ‘unusual’ arrangements.

The cross-party Standards Committee found the PM had made an ‘accurate and complete’ declaration about the holiday in December 2019, saying it was a donation from Carphone Warehouse founder David Ross even though the couple did not stay in his villa.

The committee – chaired by Labour MP Chris Bryant – overruled Ms Stone after she concluded that Mr Johnson did breach the Code of Conduct for MPs during a 15-month wrangle after initially failing to provide a full explanation, slamming him for ‘not showing the accountability required of those in public life’.

The report also suggested that the premier himself did not know exactly how the jaunt was being funded until after he arrived on Mustique and realised he was not staying in Mr Ross’s own property.

Ms Stone has revealed she will consider whether to launch an investigation into Mr Johnson’s conduct when Tory donors initially part-funded the lavish overhaul of his residence above No11 Downing Street.

A decision will be made once the ongoing Electoral Commission probe is complete.

Mr Johnson is also facing a backlash over refusing to declare his recent holiday to Lord Goldsmith’s luxury villa near Marbella on the Commons register.

The decision to use the ministerial register, which means he does not have to disclose the value of the gift, could be a further flashpoint with Ms Stone.

One Commons source told MailOnline that as the villa is owned by the Goldsmith family it cannot be treated solely as a gift from Lord Goldsmith – which could torpedo No10’s arguments against putting it on the MP register.