The State Emergency Service says it will move to change the culture of the organisation after an independent report it commissioned found women experienced sexual harassment by colleagues including sexually explicit photos sent by text message, inappropriate touching and stalking.

Female volunteers or staff reported “being followed, watched or someone [from their SES workplace] loitering nearby”, being leered at or asked intrusive questions about their private life or physical appearance, as well as having less access to support and “more difficult requirements to complete training”. 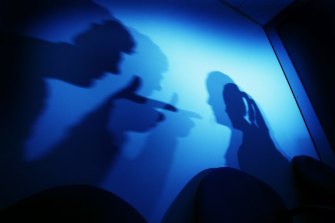 Some reported hearing derogatory comments made by members towards the LGBTI community, others said they felt targeted or blamed if they complained about misconduct.

The impacts in the qualitative review included mental health concerns including anxiety and depression, particularly when parties were required to keep working or volunteering together, and reduced confidence and self-doubt.

The review, by consultant Emma Kirkwood, made similar findings to a survey this month by the service’s volunteer association in which 133 reports of bullying were recorded and 109 witness reports of bullying, as well as 47 reports of coercive control, 75 reports of sexual harassment or unwanted attention and 12 stalking allegations.

Of 285 members who contributed to the survey commissioned by VICSES Volunteers Association president, Faye Bendrups, one said she had experienced sexual assault and attempted rape and another person wrote in the survey that the incident had been reported to them.

Members told the SES-commissioned review released to volunteers and staff on Friday that they had experienced “differences in treatment of people in leadership roles and being ‘in charge’, due to gender”, negative comments and attitudes towards women “either directly or as a collective” and gendered language particularly around task allocation.

Victorian SES chief executive Stephen Griffin said the review showed some people felt it was not safe to come forward to report misconduct and there was some doubt in internal review processes. After the volunteers’ association survey, he had asked the Victorian Equal Opportunity and Human Rights Commission to investigate such claims.

Issues revealed in the report reflected those that also exist in the wider community, but “we need to put measures in place which means we know we’re making improvements.” 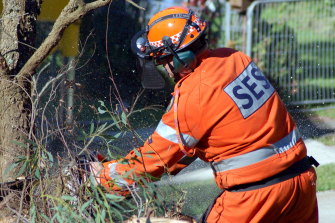 The SES will ask the state’s human rights watchdog to investigate allegations of serious misconduct raised in a survey by its volunteers’ association.Credit:

Mr Griffin said he had had two meetings with Equal Opportunity and Human Rights commissioner, Ro Allen, and was awaiting advice from her about what aspects of the organisation’s procedures and culture would be examined.

An experienced SES member who wished to remain anonymous told The Age she had been diagnosed with depression and anxiety after three years of sexual harassment by another SES unit member.

She said the handling of her complaint, raised when “the harassment escalated to stalking”, including having her street and home patrolled by the man often and for long periods, was so poor it contributed to the psychological harm she suffered.

“The mishandling of the case was more detrimental to my mental health than the combined three years of harassment and stalking,” she said

She said she had no faith in current internal processes despite the fact many members of her unit substantiated her allegations.

“They kept telling us we can’t talk about this matter; there is a culture of silence,” said the woman, who wrote to acting Minister for Police and Emergency Services, Danny Pearson, on Thursday about her experience.

Mr Pearson has asked the SES for detailed advice on how they will ensure any issues raised are dealt with appropriately and staff and volunteers have the support they need.

“We expect all our agencies to maintain high standards when it comes to workplace culture, health and safety,” he said. “Inappropriate behaviour within our emergency services is unacceptable and won’t be tolerated.

Ms Bendrups said both surveys raised questions about the level of trust by volunteers and staff have in VICSES, “about processes not being followed, about confidentiality, mental health concerns, exclusion, exhaustion from raising matters continually with no change, and feeling targeted if they raise a complaint”.

“While the people who have perpetuated the damaging culture are in charge of the changes needed, members will not be confident that their, at least legitimate concerns, and at worst heartbreaking experiences can be given the attention they deserve.“

She said any VEOHRC inquiry should not only address internal processes but “how and by whom these processes are implemented” because this is where failures occur.