Washington: US President Donald Trump's threat to impose massive new tariffs on China Friday has fractured Senate Republicans, with many hoping it's just a negotiating ploy, some cheering him on and others opposed to his "Tariff Man" strategy altogether. 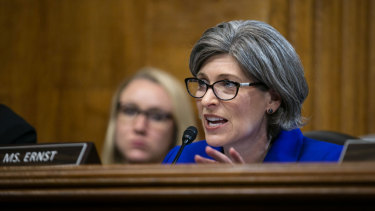 Trump's tough stance against China has also won the president an unlikely ally in Senate Minority Leader Chuck Schumer, who tweeted at him to "hang tough" and "don't back down" from his threat of more tariffs.

More than any other issue, trade under Trump has scrambled party loyalties, especially when it comes to holding China accountable for stealing intellectual property and other commercial abuses. Voters are divided by geography and industry, rather than ideology, with many of Trump's supporters in rural America bearing the brunt of China's retaliation against US commodities.

That leaves Republican senators who are up for re-election weighing whether their voters want them to support Trump wholeheartedly, or take a stand to support their economic interests. This question became even more urgent after Trump tweeted on Sunday that he will raise tariffs on about $US200 billion in goods to 25 per cent from 10 per cent, setting up a tense atmosphere for Chinese negotiators traveling to Washington this week.

"I hope it's just the president's way of negotiating," said Iowa Senator Joni Ernst, a member of Republican leadership. She has been pushing to end the tariff fights as she runs for re-election in a largely agricultural state. 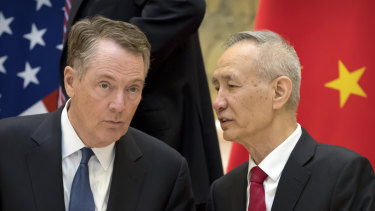 Chinese Vice-Premier Liu He (riht) is expected to resume trade talks with the US later this week. with US Trade Representative Robert Lighthizer during talks in February.Credit:AP

"We've seen him do this in the past and it brings people to the table, so I'm just going to write it off as just his way of doing business," Ernst said.

Meanwhile, Senator Cory Gardner of Colorado said he fully opposes Trump's tariffs, saying there are other ways to confront China.

"I think we need to find a solution to make China comply with the responsible rules of trade, but tariffs are taxing Americans, which I don't support," he said.

Senator Thom Tillis of North Carolina was one of the few senators running for re-election next year simply cheering on the president's strategy. 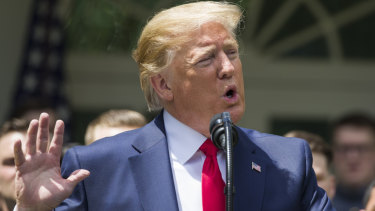 Donald Trump has decided to increase tariffs on US$200 billion worth of Chinese goods. Credit:AP

"I think that the president's trying to go into the negotiations with China from a position of strength, and as far as I'm concerned it was a good move leading up to it," Tillis said. "The president understands China's economic fundamentals and the importance of trade with the United States."

Ernst, Gardner and Tillis all are Republicans running for re-election next year.

While many Democrats say they are also concerned about China's unfair trade practices, they have suggested other avenues for the US to hold that country to account. New Jersey Senator Bob Menendez, the top Democrat on the Foreign Relations Committee, said he would rather take the case to the multilateral institutions like the World Trade Organisation already set up to mediate trade disputes.

"The way to deal with China in all of its iterations is by organising what was started at the end of the Obama administration: an international coalition to challenge China at the WTO and make China an outlier," Menendez said.

Starting a trade war, he said, is "hurting US companies, it's not moving the Chinese where we want them and it's not the way to deal with it."

Senator Tim Kaine, a Democrat from Virginia, said additional sanctions would only "magnify the pain" for Americans, especially farmers, whose livelihoods depend on the products that have been targeted by Chinese retaliation.

"Who's the trade war on? Is it on our own people or is it on China?" Kaine said, adding that presidents shouldn't have the authority to raise tariffs without a vote in Congress.

While Republicans are generally more restrained in their opposition to Trump's trade strategy, many of them say they hope China and the US are nearing a resolution to the dispute that has cast a pall of uncertainty over global markets and supply chains.

Senator John Cornyn of Texas said ramping up tariffs hurts everybody. "This could be just the president's way of trying to get to a final conclusion," he said.

Senate Agriculture Chairman Pat Roberts of Kansas said he hopes the president's threat will get the Chinese to cut a deal, but said it would be "helpful" if he would hold off for a few more days to give negotiations another chance.

In farm country, Roberts said, there are "a lot of people that had their hopes up" for a deal.

South Dakota Senator John Thune, also a member of GOP leadership, said he understands the need to draw "a hard line" with China. But he said he and his Republican colleagues have tried to make the White House aware of the economic price paid by Americans for current tariffs — and for additional tariffs that Trump continues to threaten.

"I hope it has the desired result because we do need to close these deals out," Thune said in an interview with Bloomberg TV. "We do have a lot of industries and sectors of industries in this country that are being harmed by these trade tariffs that are already in place and could be further harmed if they ratchet it up."