A legal bid to overturn limits on the number of people allowed to attend weddings has been rejected in the High Court, despite a venue warning it would cause ‘serious and irreparable harm’.

Cripps Barn Group Ltd, a wedding operator which runs a number of venues across England, asked for an injunction to prevent enforcement of the limit on numbers.

At the start of the coronavirus pandemic, all weddings were postponed by the Government – but they were eventually allowed to resume in August, albeit with a limit of 30 guests. 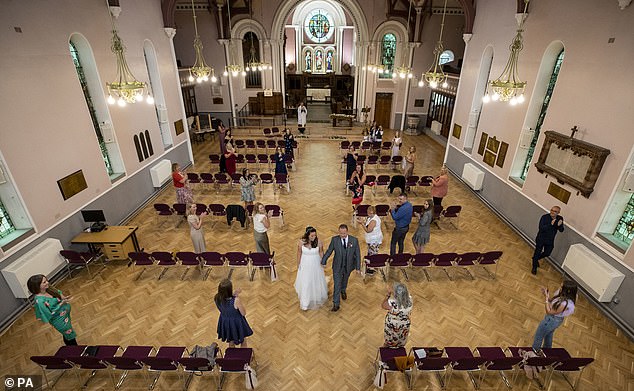 A High Court judge has rejected an appeal to lift a 15-person limit on wedding guests, brought in by the Government last month, pictured, a socially distanced wedding in Liverpool 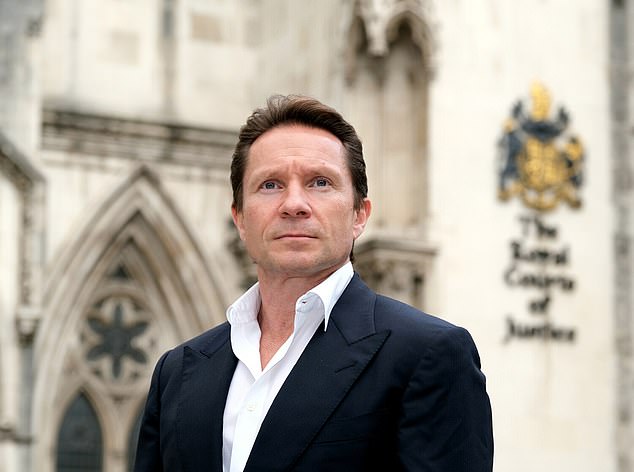 A High Court judge said the public interest in keeping the restrictions ‘outweighed,’ any impact on businesses. Earlier this month businessman Simon Dolan (pictured) launched a wider legal challenge, over the legality of Government measures

When a nationwide 10pm curfew was brought into effect last month to curb a rise in Covid-19 cases, the Government also halved the number of permitted wedding attendants to 15 – but funerals were allowed up to 30 mourners.

Lawyers for Cripps argued at a hearing on Thursday that the regulations are unlawful and will cause the firm and other wedding venues to suffer ‘serious and irreparable harm’ if they continue to be enforced.

But the firm’s application for an injunction was rejected by Mr Justice Swift, who said the public interest in keeping the restrictions in place ‘outweighs’ the harm that will be suffered by venues.

The judge told the court: ‘I do not doubt the continuing damage to Cripps’ business by reason of the restriction on how many people may attend weddings and wedding receptions – that is a clear and present argument.

‘Moreover that is to be seen in the context of restrictions… having been in place since the end of March, and the cumulative impact of those restrictions on Cripps… must have been very severe indeed.

‘The restrictions have prejudiced every person and, I suspect, the vast majority of businesses.

‘But the public interest in maintaining the restriction… outweighs that indisputable harm.’

He added that the restriction on weddings was part of a ‘package’ aimed at suppressing transmission of the virus and therefore one rule could not be changed without ‘consequential changes to other measures in the scheme’.

The judge said the restrictions must remain in place ‘unless and until’ a court finds they are unlawful.

The application was made ahead of a wider legal challenge, launched earlier this month by Cripps along with businessman Simon Dolan, over the legality of Government measures aimed at reducing the spread of Covid-19.

It is the second High Court challenge Mr Dolan has brought against lockdown rules, the first having been dismissed in July.

The tycoon, who according to the Sunday Times Rich List is worth £200 million, will challenge that decision at a Court of Appeal hearing later this month. 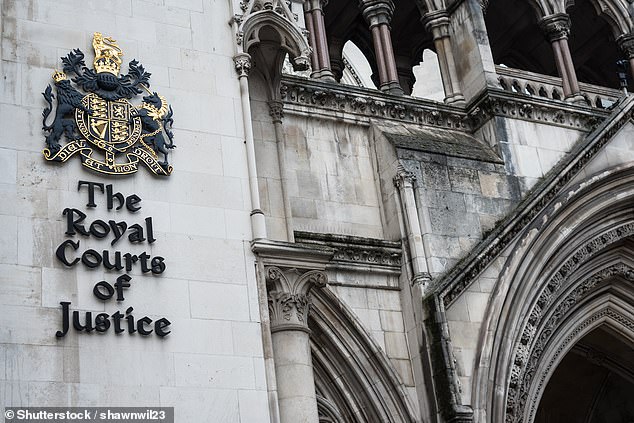 In Mr Dolan’s previous case, he raised more than £200,000 through crowdfunding in order to launch the claim against Health Secretary Matt Hancock and Education Secretary Gavin Williamson over corona virus regulations – imposed in March following the outbreak of Covid-19.

Mr Dolan previously claimed the rules are costing the economy £2.5billion each day and were beyond the Government’s powers.

He claimed the measures were a ‘disproportionate breach of fundamental rights and freedoms’ protected by the European Convention on Human Rights.

Mr Dolan also challenged the decision to close schools across the country to most children, while asking for disclosure of minutes from all Scientific Advisory Group for Emergencies (Sage) meetings since the beginning of the year.

The Government opposed the claim and argued that Mr Dolan’s case was not open to legal challenge.

And in a ruling at the High Court in July, Mr Justice Lewis refused permission for a full hearing of the challenge.

That case in now be appealed, and is due at the Court of Appeal later this month.

Simon Dolan, the multi-millionaire entrepreneur challenging the Government’s lockdown in the High Court, divides opinion. To the 250,000 supporters of his Keep Britain Free movement, he’s a champion of small businesses devastated by ever-stricter lockdown restrictions. 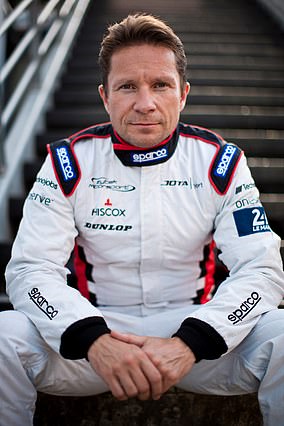 His opponents, however, accuse the businessman of being ‘selfish’ and ‘killing people’ – and have sent anonymous death threats on social media.

Dolan, 51, shrugs off the trolls – ‘they’re just words on a screen; if you don’t like it, delete it’ – and says the longer the lockdown continues, the quieter his critics become.

Now Health Secretary Matt Hancock has introduced the Rule of Six and 10pm curfews, Dolan says ‘around 99 per cent’ of the messages he receives are supportive – including thousands of letters and emails from small business owners.

‘They have written to me saying, ‘Thank you so much for what you are doing and this is my situation’, and they spend a long time typing these emails out,’ he says. ‘In a way you are acting almost as a therapist – it seems to be a way in which they can get their predicament off their mind and explain it to someone who understands.

Dolan, who grew up in a three-bed semi in Essex, says he can empathise with firms struggling to survive Covid because he made his £200million fortune through ‘hard graft’, starting out selling eggs and cheese on a market stall in Chelmsford before building up a portfolio of businesses spanning from aviation to software and motorsports.

Speaking from his chateau in France – one of his eight homes alongside a £15million Caribbean estate on Mustique that was once owned by David Bowie – Dolan says he relates to small business owners because, ‘I know how hard you have to work, and how much you have to put yourself on the line.’

He says: ‘Any death is tragic, and I’m not trying to say the economy is more important than people’s lives.

But there are people who have been working for 50 years to build a business and now they’re screwed – they are trying to do everything they can to stay open, and the public health officials are putting more and more restrictions in place and no one wants to come.’

He believes the full economic impact of the lockdown won’t be felt until next year, when he thinks employment will spiral to six million and businesses will have to start repaying loans taken out to survive the crisis.

‘Hospitality businesses will still be crippled – you won’t see football stadiums at full capacity next spring – and they will have to start repaying loans out of taxed profits, which they probably won’t be making,’ he says.

‘That’s when we’re really going to see problems kicking in. The Government should instruct the banks to waive the loans – otherwise those businesses are going to go bust and the banks are going to come to the Government for 80 per cent.’ Dolan’s own businesses include Jota Aviation, a chartered aviation business based at Southend Airport that ferries around Premier League footballers and other corporate clients.

He says it has been ‘hit badly’ by the pandemic, with its usual £20million revenue down 40 per cent due to quarantine travel bans. ‘Business is business,’ he shrugs. ‘You’ve just got to fight with what you’ve got.’

He decided to challenge the lockdown in April, after reading a newspaper article by barrister Francis Hoar who suggested there could be a judicial review similar to the legal claim against the parliamentary process for Brexit, which was brought by businesswoman Gina Miller.

Dolan contacted Hoar’s Field Court Chambers and they joined forces with Michael Gardner, a partner at law firm Wedlake Bell. ‘A week after speaking to him, we were all up and running and ready to take on the Government.’

His legal claim argues that the Government’s lockdown in response to the pandemic is ‘disproportionate’ to the threat and breaches fundamental freedoms protected by the European Convention on Human Rights. 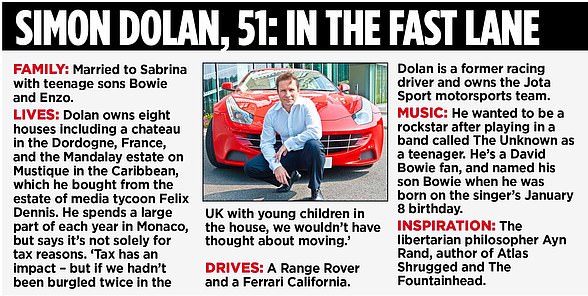 He initially started it as a personal crusade, but has now been joined by people ‘from all walks of life’, including pensioners ‘who think the whole thing’s bloody ludicrous’.

He says: ‘They are quite happy to look after themselves, they don’t need looking after.

‘What right does the Government have to tell a 60 or 70-year-old to stay indoors and not visit his grandchildren because he might die? Surely that’s up to him?’

His opinion has been supported in recent weeks by Lord Sumption, a retired Supreme Court judge who called blanket lockdown restrictions ‘despotic and ineffective’ and argued that Britons should be allowed to manage the virus themselves because they can ‘fine-tune their precautions to their own situation’.

Lord Sumption has spoken to Dolan’s legal team to share views. ‘Having an ex-Supreme Court judge basically telling people to break the law, that’s a big thing,’ Dolan says. Other well-known figures are starting to speak out against the lockdown – although Dolan says many business owners remain silent, for fear of alienating a proportion of their customers.

Insulated by his self-made wealth, Dolan has no such qualms. He calls Matt Hancock ‘a tinpot dictator’ and refuses to wear a facemask. He says: ‘I have worn one once, to buy a baguette in Monaco. I was only in there for five minutes and I hated it, I find them awful.’

He adds that the Rule of Six is ‘utterly ludicrous’ and that it puts the police ‘in a dreadful position’. ‘I am fairly sure a policeman will turn up at someone’s door with eight people there and it will kick off horribly and someone is going to get killed or badly injured.’

In July, a High Court judge threw out Dolan’s claim but it will be heard in the Court of Appeal next month. The hearing will be live in an open court, rather than via Zoom, but Dolan mischievously says social distancing won’t be possible because the Government is bringing 11 lawyers. He hopes to attend in person – as long as quarantine rules allow him to fly from his main bases in Monaco or France.

If he loses, he could have to pay up to £900,000 for the Government’s costs but says his crusade will still have been worth it.

‘The costs are irritating but they don’t make any difference to my life. It will be worth it in a sad way – because if we lose the appeal, it will mean the Government can do what the hell they want, and that includes telling people they can’t bury their parents or see them in care homes.’

He adds that he ‘can’t bear politicians or anything they stand for’ – and that the only British politician he admired was Margaret Thatcher.

‘One of the things she said was, ‘We don’t do what’s popular, we do what’s right’. I don’t think that’s been applicable for 30 years now.’