Return of the eco mob: Just Stop Oil activists cause traffic misery in Sheffield as they block roads by staging slow march in first climate stunt of the year using new tactic that helps them evade arrest

Just Stop Oil shut down the centre of Sheffield this afternoon with another ‘go-slow’ protest – the group’s first action of 2023.

Police were again outfoxed by eco-zealots with banners who meandered along the Yorkshire city’s roads preventing traffic passing and causing huge queues.

South Yorkshire Police closed routes to try to divert traffic, but several lorries were stuck behind the human blockade with horns blaring at the activists who were chanting: ‘Just stop oil’, ‘Just stop gas’ and ‘no more coal mines’ at the top of their voices.

One critic who say them tweeted footage of the group and said: ‘A flock of rich privileged Brits from Just Stop Oil is protesting the laws of physics, economy and common sense in Sheffield this morning’.

In London, The Met has already admitted the tactic of slow walking makes it harder for officers to arrest and prosecute them for unlawful obstruction – but critics have said police should arrest immediately due to the disruption. 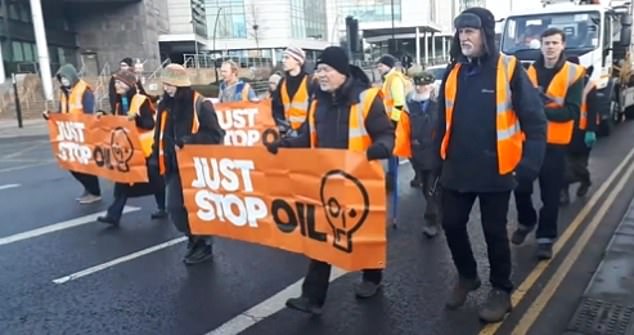 Just Stop Oil protesters on the slow march also tried to hand out leaflets to people on the streets they shut down.

Police will soon have the power to stop ‘go-slow’ protests before they cause chaos under a new law being proposed by ministers.

He said the legislation would strike a better balance between the right to protest and ‘the rights of the hard-working majority to go about their day-to-day business’.

It comes after some climate protestors changed tactics in recent weeks to include slowing traffic to a crawling pace with walking protests on busy roads through cities, infuriating drivers and causing tailbacks.

Just Stop Oil activists last month led walking protests in London during rush hour, blocking three lanes of traffic on both sides of the A2, in Southwark, before launching another similar blockade in the City.

The group has refused to rule out targeting the King’s coronation in May in order to build on its recent ‘success.’

The radical group has seen 2,000 arrests at its protests in 2022 and two of its members are accused of causing £6,000 damage by throwing tomato soup at Van Gogh’s Sunflowers last October.

Downing Street said an amendment will be tabled to the Public Order Bill in the coming days.

This will broaden the legal definition of ‘serious disruption’, giving police greater ability and clarity over when to intervene.

Under the proposed change, if a slow walk begins and officers assess that it could cause serious disruption, they can shut it down before chaos erupts.

They will first be able to place conditions on the slow walk, requiring that it proceeds on the pavement instead.

Around ten eco-zealots were surrounded by police as they held placards and lay on the ground at the entrance of the Westminster building. 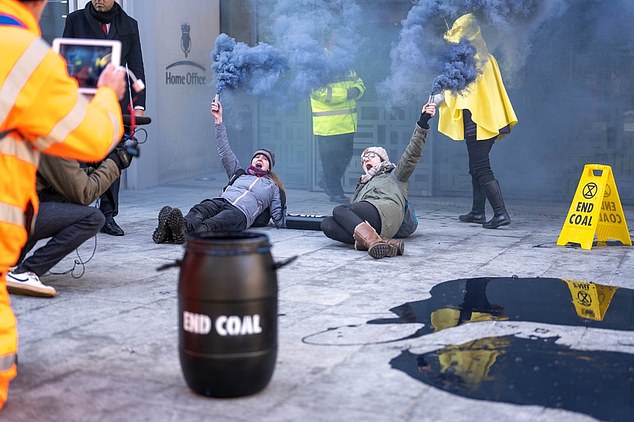 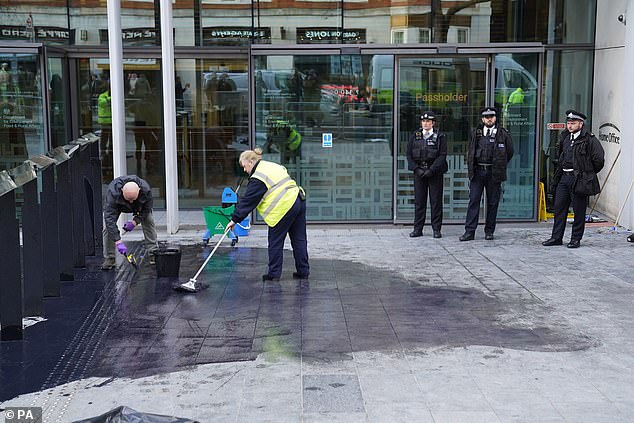 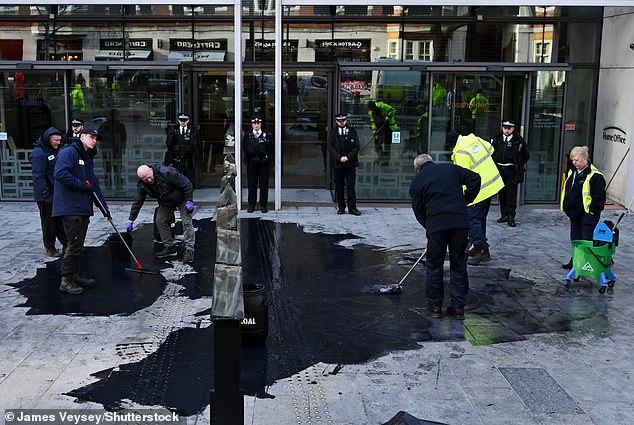 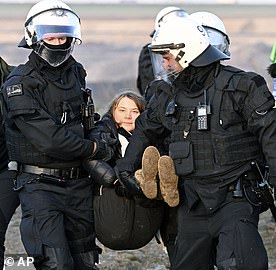 Protesters poured the black paint – which looked like crude oil – out of plastic buckets marked ‘End Coal’, while two of the activists appeared to have attached themselves together with a large tube.

It comes two weeks after the climate change group said it would abandon disruptive protests.

But the group have been spurred to demonstrate after the Government’s decision to approve a new coal mine in Cumbria, passed by Levelling Up Secretary Michael Gove last month.

Met Police were called to the Home Office at around 11am to disperse the group, where they arrested two men on suspicion of causing criminal damage.

The two demonstrators on the ground set off flares and shouted, while others dressed as yellow birds and one man as a skeleton.

Some of the group held signs reading ‘cut the ties to fossil fuels’.

But two weeks ago Extinction Rebellion (XR) said it would abandon disruptive protests, saying it would ‘prioritise attendance over arrest and relationships over roadblocks’.

However, XR said it was holding its demonstration to protest the Cumbria coal mine.