At least 11 arrests have been made Wednesday evening after authorities declared that a protest in downtown Portland had turned into a riot.

The riot was declared amid a wave of destruction in the city, which saw people smash windows of local businesses in the downtown area.

According to Fox 12 Oregon’s Brenna Kelly, protesters threw a molotov cocktail and glass bottles. One person arrested was found to be in possession of a rifle.

Police also shared photos of items that had been allegedly seized from protesters, which include commercial-grade fireworks, hammers, and spray paint.

The Multnomah County Sheriff’s office announced that the National Guard has been deployed by Gov. Kate Brown to respond to acts of violence as well as “maintain public order and ensure community safety.”

“Guard members are trained in crowd control and will be riding with local response teams. They are dressed in military style garb, which is their uniform,” the Sheriff’s office said. “Oregon National Guard members are civilian community members helping to protect us. We don’t take this decision lightly.” 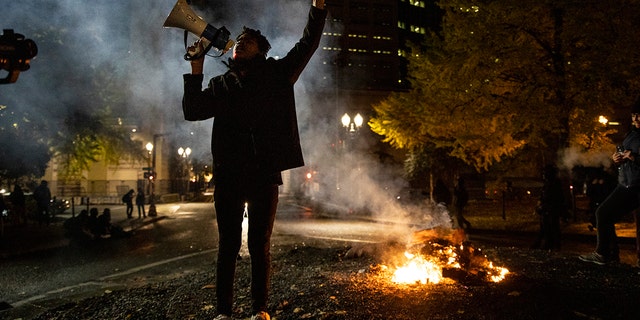 “Our goal is to keep our community safe,” police added. “We encourage demonstrators to gather peacefully.”

Those who fail to leave the area are subject to arrest, citation, and or use of force including, but not limited to impact munitions and/or tear gas, according to police.

Protesters were captured on video smashing windows and vandalizing property. An American flag was also set on fire.

Meanwhile, caravans of Denver police officers have deployed pepper balls and clashed with protesters who started a fire at the intersection of Washington and Colfax, according to FOX 31.

FOX 31’s Gergory Nieto added that a “handful of arrests” have reportedly been made. The protesters, who claim to be anti-fascist, carried a banner which read “Death to Fascim and the Liberalism that enables it” and were heard chanting “No Borders. No walls. No USA at all,” according to video shared by the Daily Caller.

The governor’s decision to send in the National Guard comes after she directed to place its members on standby ahead of potential election unrest in Portland earlier this week.

She also extended an order earlier today that created a joint incident command structure in Portland, with the Oregon State Police and the Multnomah County Sheriff’s Office co-managing the police response in the city.

“Every Oregonian has the right to express themselves freely and to peacefully assemble. However, I want to be clear that voter intimidation and political violence will not be tolerated. Not from the Left, the Right, or the Center. Not this week, not any week in Oregon,” Brown wrote in a release by the governor’s office.

“We’ve seen firsthand what happens when free expression is fueled by hate,” she continued. “We know that there are some people who might use peaceful election night protests to promote violence and property destruction.”

The rioting and protesting in Portland and Denver come amid nationwide unrest as votes in the 2020 election continue to trickle in.

According to the latest estimates from the Associated Press, former vice president Joe Biden is currently leading in Nevada with 49.3% of the vote and compared to Trump’s 48.7%, a difference of more than 7,600 votes.