Rishi Sunak admitted today that working from home is here to stay and Britons are ‘probably not’ going to spend five days a week in the office after the pandemic disappears.

The Chancellor said he was a fan of the positives that communal working brings but admitted that changes made during the last year would probably stay at least in some form.

In a wide-ranging interview for Politico’s Westminster Insider podcast he also defended his hawkish attitude to lockdowns and hit out at critics of his Eat Out to Help Out subsidy scheme over claims it helped the spread of coronavirus.

The 40-year-old said he would not be doing his job if he did not advise the Prime minister about the economic cost of putting UK PLC into hibernation in a bid to beat the virus.

And he claimed it was not plausible to link his programme to breathe life back into the hospitality sector last August with an autumnal spike in cases, as some scientists have done.

Asked what the ‘new normal’ would look like after the lockdown is lifted in the summer, Mr Sunak said: ‘Like the PM, I think both of us are in the camp of believing that people being physically together in workplaces is a good and positive thing.

‘I think the spontaneity that comes from that, the camaraderie, the team building, I think it’s all really important.

‘And I’ve missed that over the past year, so I look forward to that coming back. Is it going to come back in exactly the same way? Probably not.’ 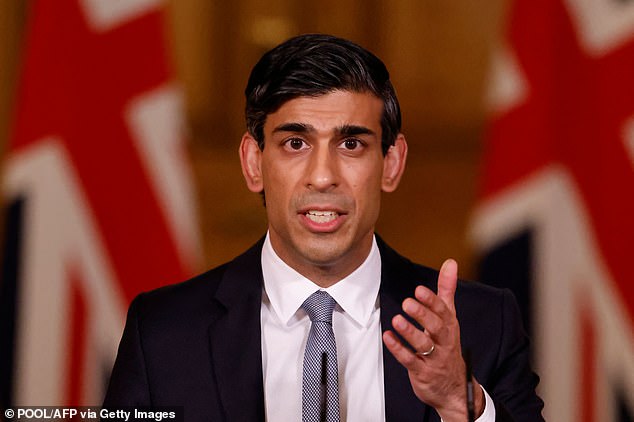 The 40-year-old said he would not be doing his job if he did not advise the Prime minister about the economic cost of putting UK PLC into hibernation in a bid to beat the virus. 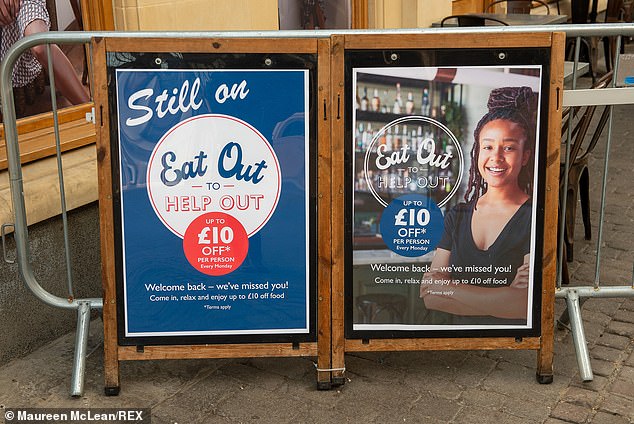 He claimed it was not plausible to link his programme to breathe life back into the hospitality sector last August with an autumnal spike in cases, as some scientists have done. 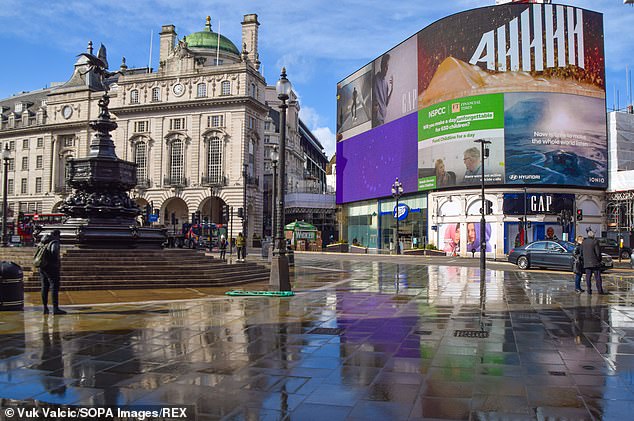 The Chancellor said he was a fan of the positives that communal working brings but admitted that changes made during the last year would probably stay at least in some form, with an impact on city centres

Rishi Sunak admitted he was a ‘big gamer’ as a kid and relaxes by playing retro computer games when he is not running the economy.

He told Westminster insider that he has a sugar addiction that consists of ‘a cinnamon bun in the morning, chocolate chip muffins for breakfast, and cake in the afternoon’. But he revealed he offsets it by fasting one day per week – although ‘not all the time’.

In a peek at his private life the fasther of two said he came from a ‘Nintendo house’ and the passion had been reignited via a Christmas present from his brother.

‘They relaunched the SNES in a mini format with all the pre-loaded games on it, and I had absolutely no idea.

‘So he gave it to me as a Christmas present and it was epic.

‘So we had a brilliant afternoon of Street Fighter and Mario Kart and everything else. So yeah, we did a lot of that. I love that.’

Mr Sunak is  a GP’s son who married an Indian tech billionaire’s daughter and built a multi million-pound fortune that saw him dubbed the ‘Maharaja of the Dales’.

A graduate of £42,000-per-year Winchester College and Oxford University, where he studied PPE, he is believed to be one of the richest members of Parliament, and lives with his family in a magnificent Georgian manor house in the small village of Kirby Sigston, just outside Northallerton in North Yorkshire. 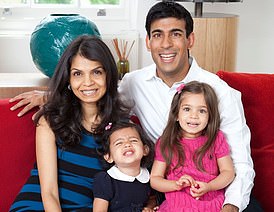 His Instagram account depicts a sport-loving family man who dotes on the two daughters he shares with his wife, Akshata Murthy, whose father N.R. Narayana Murthy is India’s sixth-wealthiest man thanks to his ownership of multinational business technology giant Infosys.

He replaced close friend Sajid Javid in No11 last February.

‘And actually, even small changes have quite big implications, whether it’s for the economics of commuter rail or a coffee shop that’s used to servicing commuters.

‘If people work one day a week on average at home and everyone does that, that’s 20 percent less commuting traffic – that’s not a small impact. So I think we’ll have to see all how that plays out.’

Last month Boris Johnson said he was confident Britain’s cities would ‘bounce back’ from the coronavirus exodus of workers – as it was revealed working from home rules could be in place until the summer.

The Prime Minister told MPs that rules that have ordered people not to go to offices and factories unless they cannot work anywhere will continue until the completion of a review into long-term social distancing measures.

It raises the prospect of economic problems for city centres across the UK to continue for many months to come – while shops, pubs and restaurants will be allowed to open they may not have any customers.

But expectations of workers going back to their offices full time are low, with a host of large firms already planning to relocate from larger offices to smaller ones, with staff working from home and hot-desking when they need to come in in person.

Mr Sunak today talked up a new American model of people working more from services offices in their local neighbourhood on days when they do not want to work from home but also do not want a long commute.

The Chancellor was also bullish about his own role during the pandemic. He has been seen as a hawk on the lockdown and the Covid restrictions, arguing against long lockdowns on economic grounds.

And he told Politico that he would not be doing his job if he did not do that, adding ‘it’s easy to judge these things with hindsight’.

‘But I wouldn’t be doing my job properly if I didn’t give the Prime Minister what I thought the impact any decision would have on the economy, he added, in comments likely to be welcomed by Tory lockdown critics.

‘And even when we’re considering the health impact, it’s not just coronavirus health impacts that we should be cognisant of.

‘We should also think about the non-coronavirus health impacts, whether that’s mental health, whether that’s people not getting treatment they need, or whether it’s the delayed backlog that is accruing, or indeed the ill health, chronic ill health outcomes that come from unemployment, of which there is plenty of evidence as well.’

A study last year suggested that Eat Out to Help Out played a ‘significant’ role in accelerating Britain’s second wave of coronavirus.

There was a sharp increase in clusters of Covid-19 infections a week after the Government scheme began, according to University of Warwick researchers.

They believe the initiative, which gave diners up to 50 per cent off meals out, was to blame for as many as 17 per cent of new infection clusters between August and early September – one in every six.

But Mr Sunak said that ‘it’s not clear at all, actually that you can draw a link in the way that some people try and do’.

He said that the South West saw the lowest increase in infections, despite having the highest uptake of the discount scheme, and that a surge was also seen in European countries who did not run a similar programme.