Mitt Romney slams ‘vile, hate-filled politics’ and pleads with Donald Trump to ‘tone it down’ after calling Kamala Harris a ‘monster’ saying ‘the world is watching with abject horror’

Mitt Romney slammed the ‘vile’ and ‘hate-filled’ politics in America on Tuesday and asked President Donald Trump to ‘tone it down’ when it comes to his fiery rhetoric.

His plea came with less than three weeks to go before Election Day and after the president spent the morning in a Twitter fury – attacking political foes and the media in a storm of tweets. Trump also drug Romney into the matter, pointing to a clip of Joe Biden struggling to remember the Republican senator’s name to argue Biden has diminished mental capabilities.

In his 250-word missive, Romney attacked Republicans and Democrats alike for the vitriol but noted there was exception – Joe Biden.

‘I’m troubled by our politics as it has moved away from spirited debate to a vile, vituperative, hate-filled morass that is unbecoming of any free nation – let alone the birthplace of modern democracy,’ Romney wrote in a statement he posted to Twitter. 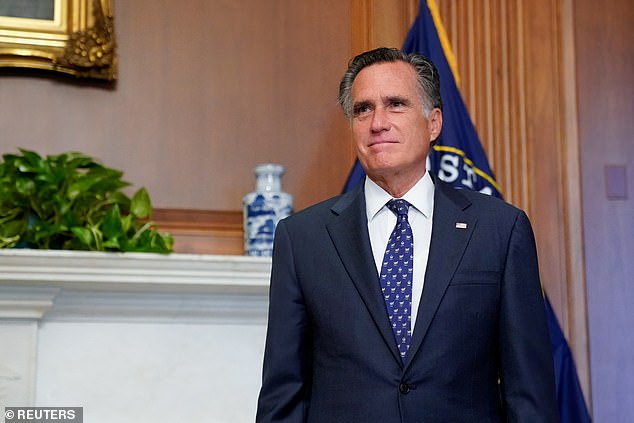 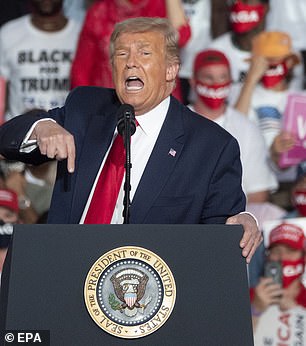 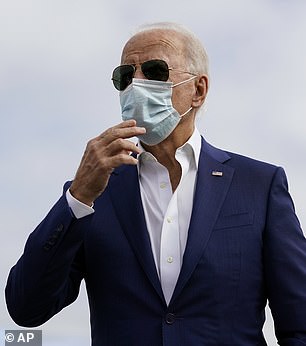 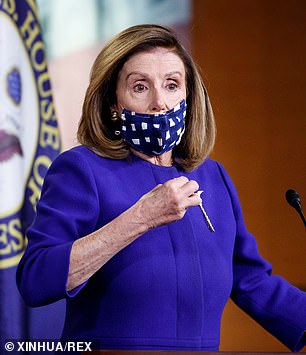 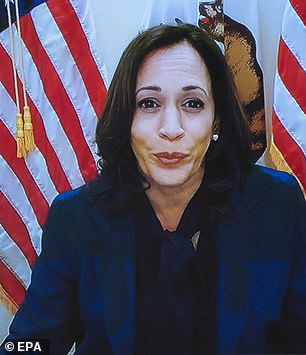 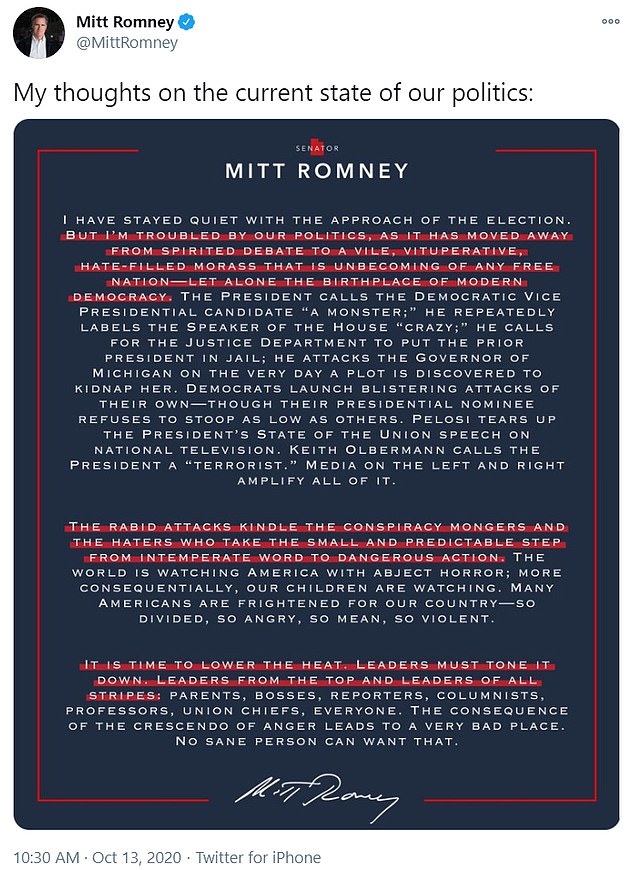 He went on to attack Republicans and Democrats alike.

But Romney didn’t let Pelosi off the hook. He criticized the speaker for tearing up the text of President Trump’s State of the Union address in January.

I have stayed quiet with the approach of the election. But I’m troubled by our politics as it has moved away from spirited debate to a vile, vituperative, hate-filled morass that is unbecoming of any free nation – let alone the birthplace of modern democracy.

The president calls the Democratic vice presidential candidate ‘a monster’; he repeatedly labels the speaker of the House ‘crazy’; he calls for the Justice Department to put the prior president in jail; he attacks the governor of Michigan on the very day a plot is discovered to kidnap her.

Democrats launch blistering attacks of their own – though their presidential nominee refuses to stoop as low as others. Pelosi tears up the president’s State of the Union speech on national television.

Keith Olbermann calls the president a ‘terrorist.’ Media on the left and right amplify all of it.

The rabid attacks kindle the conspiracy mongers and the haters who take the small and predictable step from intemperate word to dangers action. The world is watching America with abject horror; more consequentially, our children are watching. Many Americans are frightened for our country – so divided, so angry, so mean, so violent.

It is time to lower the heat. Leaders must tone it down. Leaders from the top and leaders of all stripes. Parents, bosses, reporters, columnists, professors, union chiefs, everyone. The consequence of the crescendo of anger leads to a very bad place. No sane person can want that.

Romney didn’t mention Biden by name in his rare bit of praise but it was obvious who he meant when he noted the Democrats’ ‘presidential nominee’ doesn’t ‘stoop as low as others.’

‘Democrats launch blistering attacks of their own – though their presidential nominee refuses to stoop as low as others,’ he wrote.

Romney went on to remind America’s political leaders the world was watching with ‘abject horror’ as November 3 approaches.

‘The world is watching America with abject horror; more consequentially, our children are watching. Many Americans are frightened for our country – so divided, so angry, so mean, so violent,’ he noted.

‘It is time to lower the heat. Leaders must tone it down. Leaders from the top and leaders of all stripes. Parents, bosses, reporters, columnists, professors, union chiefs, everyone. The consequence of the crescendo of anger leads to a very bad place. No sane person can want that,’ he concluded.

Romney has tangled with Trump on many occasions, and, ahead of the 2016 election gave a major speech denouncing his candidacy. He said he wrote in the name of his wife, Anne Romney, on the presidential ticket that year.

The Republican senator from Utah also voted to convict Trump on one article of impeachment – the only member of the president’s party to break ranks.

Trump has attacked Romney in return.

And, on Tuesday, the president brought Romney into his latest attack on Biden.

He claimed that since Biden couldn’t remember Romney’s name Monday when referencing the Republican senator, he must have dementia.

‘Mitt can’t be thrilled about this! Joe also said yesterday he’s running for the U.S. Senate (again) and totally forgot where he was (wrong State!),’ the president wrote in an early morning Twitter rampage, pointing to other gaffes from the former vice president on the campaign trail.

Trump added: ‘Joe has never been a nice or kind guy, so it’s easier to find this obvious & rapidly getting worse ‘dementia’ unacceptable for USA!’

The president linked to video of Biden speaking to reporters Monday about the confirmation hearing for Judge Amy Coney Barrett.

He said the mother of seven should not have to face questions over her religion from senators who claim she won’t be able to separate her morals – as a devout Catholic – from her position on the Supreme Court.

‘No, I don’t think there should be any questions about her faith,’ Biden said, adding a personal anecdote about the time he and President Barack Obama ran against Mitt Romney in the 2012 presidential election.

‘I got in trouble when we were running against the senator who was a Mormon—the governor,’ Biden said of Romney’s religion.

Trump launched an early morning Twitter spree on Tuesday where he sent out more than 50 tweets and retweets in less than two hours.

During Trump’s rally in Florida Monday night, he mocked his Democrat rival for stating he was ‘running for Senate’ – using the momentary lapse as more evidence of his claim that Biden is unfit for office.

Trump, 74, has made the age and frequent gaffes of Biden, 77, a recurrent line of attack in his campaign against the former vice president.

Campaigning in Toledo, Ohio on Monday, Biden provided the president with yet more fodder as he addressed United Auto Workers who represent a local General Motors powertrain plant.

Biden spoke in a parking lot with about 30 American-made cars and trucks arrayed nearby.

‘But I promise you this, I will govern as an American president.’

The former vice president was a longtime senator from Delaware.

The president, who was in Sanford, Florida on Monday night for a campaign rally, went to town on Biden’s gaffe.

‘Sleepy Joe Biden, not a nice guy, by the way. He had a very bad day today,’ Trump said.

‘He forgot Mitt Romney’s name. He didn’t know what state he was in. And he said today he’s a proud Democrat running for the US Senate.’

Trump joked: ‘Could you imagine if I did that? ‘Great to be with you. It’s great to be a wonderful developer from New York.’ They’d say: ‘he’s out of here. Get him out.”

Biden ‘has got a lot of bad days coming,’ Trump predicted.