Russia is carrying out efforts to sow discord in the US — primarily to hurt Biden — because Moscow views him as part of an anti-Russian American establishment, Wray told lawmakers during a House Homeland Security Committee hearing on Thursday on threats to the nation. 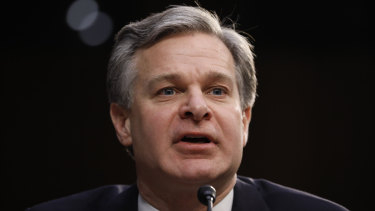 "Russia continues to try to influence our elections, primarily through what we call malign foreign influence," Wray said. It's an assessment sharply at odds with President Donald Trump, who still dismisses as a hoax the intelligence community's finding that Russia worked to help him win the White House in 2016.

US national security agencies haven't yet seen Russia trying to break into election infrastructure as it did in 2016 when it hacked voting databases, Wray said.

In addition to Russia, China is among adversaries that are trying to interfere in the presidential campaign, primarily through disinformation, Wray said.

US agencies previously focused on "efforts to combat malign foreign influence focused solely on the threat posed by Russia," Wray said, but now the FBI is "widening its aperture" leading into the November 3 election "to confront malign foreign operations of China, Iran, and other global adversaries."

In prepared testimony, Wray said, "This year's election cycle, amid the COVID-19 pandemic, provides ample opportunity for hostile foreign actors to conduct disinformation campaigns and foreign influence operations in an effort to mislead, sow discord and, ultimately, undermine confidence in our democratic institutions and values."

Under questioning, Wray also declined to say that the anarchist movement antifa, cited often by Trump and Attorney General William Barr, is the biggest domestic threat.

"We don't think of threats in terms of left or right," Wray added. "We're focused on the violence, not the ideology."

The hearing opened with controversy, as Acting Homeland Secretary Chad Wolf declined to appear even after the Democratic-led committee subpoenaed him. 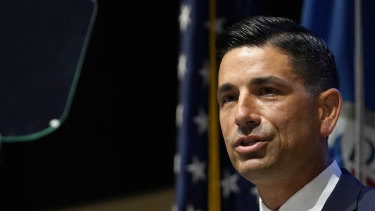 Wolf has cited his pending nomination for the secretary's position and the tradition of nominees not commenting before their Senate confirmation hearings.

In a statement on Wednesday, Ken Cuccinelli, who's serving as Wolf's deputy, denounced "this transparent and brazen attempt at Beltway political theatre."

Democratic Representative Bennie Thompson of Mississippi, the committee's chairman, called Wolf's absence "an appropriate metaphor for the Trump administration's dereliction of duty" on homeland security issues. He noted Wolf has made public comments, including in appearances on Fox News.

Brian Murphy, who was the Department of Homeland Security's intelligence chief until he was demoted, has filed a whistle-blower complaint asserting that Trump administration officials suppressed intelligence on Russian election interference and the threat from white supremacists.

Murphy said the department's chief of staff sent him an email directing him to stop dissemination of intelligence products about Russian disinformation efforts because it "made the president look bad," according to the complaint filed with the DHS inspector general.

Wolf has said Murphy fabricated his allegations after he was demoted for conducting surveillance of reporters covering protests.

Our weekly newsletter will deliver expert analysis of the race to the White House from our US correspondent Matthew Knott. Coming soon. Sign up now for the Herald‘s newsletter here, The Age‘s here, Brisbane Times‘ here and WAtoday‘s here.