Ukrainians cheered from balconies as their air defences blasted Russian missiles and drones out of the sky in the first hours of the New Year, which Russia ushered in by attacking civilian targets across Ukraine. 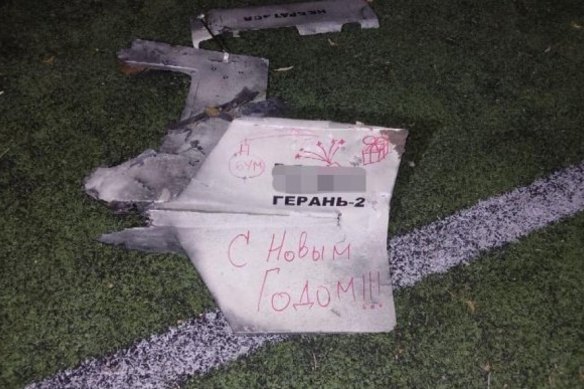 “Glory to Ukraine! Glory to heroes!” some shouted as air raid sirens wailed.

Ukrainian forces shot down 45 Iranian-made Shahed drones fired by Russia on the first night of the year, President Volodymyr Zelensky said on Sunday, praising Ukrainians for showing gratitude to the troops and one another.

“Drones, missiles, everything else will not help them,” he said of the Russians. “Because we stand united. They are united only by fear.”

In a stern New Year’s speech, Russian President Vladimir Putin signalled no let-up in his assault on Ukraine, however. 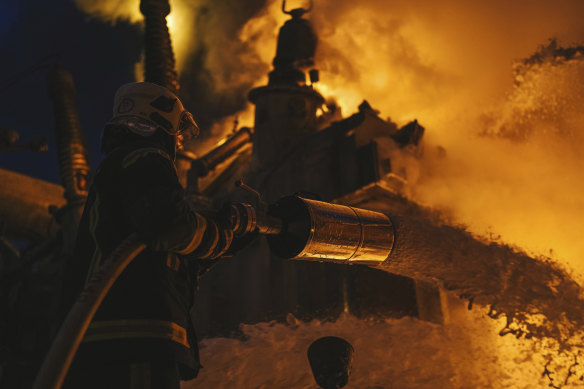 Ukrainian State Emergency Service firefighters work to extinguish a fire at an infrastructure facility after a Russian drone attack in Kyiv in mid-December.Credit:AP

“It is loud in the region and in the capital: night drone attacks,” Kyiv Governor Oleksiy Kuleba said.

Earlier, one person was wounded by debris from a drone destroyed over Kyiv that hit a road and damaged a building in a northeastern district of the capital, Mayor Vitali Klitschko said.

A 19-year-old man was taken to hospital in the mainly residential Desnianskiy district, on the left bank of the Dnipro River, Klitschko said on the Telegram app.

Reuters was not able to independently verify the information.

The regional military command in Ukraine’s east said air defence systems destroyed nine of the Iranian-made drones over the Dnipropetrovsk and Zaporizhzhia regions by the early hours of Monday.

New Year in the trenches

On Twitter, the US ambassador to Ukraine, Bridget Brink, said, “Russia coldly and cowardly attacked Ukraine in the early hours of the New Year. But Putin still does not seem to understand that Ukrainians are made of iron.” 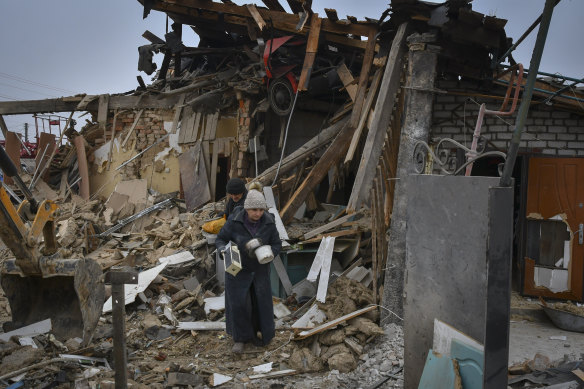 ocal residents carry their belongings as they leave their home ruined in a Russian rocket attack in Zaporizhzhya.Credit:AP

Troops toasted the New Year on the front line in Ukraine’s eastern province of Donetsk. One soldier, Pavlo Pryzhehodskiy, 27, played a song he had written on a guitar after 12 of his comrades were killed in a single night.

“It is sad that instead of meeting friends, celebrating and giving gifts to one another, people were forced to seek shelter, some were killed,” he told Reuters.

“It is a huge tragedy that cannot ever be forgiven. That is why the New Year is sad.”

In a nearby trench, soldier Oleh Zahrodskiy, 49, said he had volunteered after his son was called up as a reservist. Now, his son is in hospital, fighting for his life with a brain injury, while his father mans the front.

“It is very tough now,” he said, holding back tears.

Kyiv’s police chief, Andrii Nebytov, posted a photo on the Telegram app, showing what was described as a piece of a drone used in an attack on the capital, with a handwritten sign on it in Russian reading “Happy New Year”.

“This wreckage is not at the front, where fierce battles are taking place, this is here, on a sports grounds, where children play,” Nebytov said. 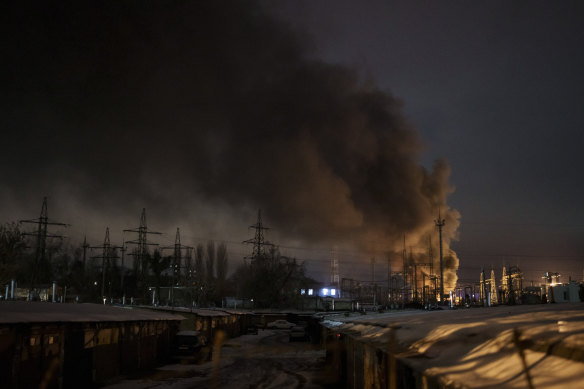 moke billows from a power infrastructure following a Russian drone attack in Kyiv in mid-December.Credit:AP

Russia has flattened Ukrainian cities and killed thousands of civilians since Putin ordered his invasion in February, saying Ukraine was an artificial state whose pro-Western outlook threatened Russia’s security.

Russia, which denies targeting civilians, has since claimed to have annexed about a fifth of Ukraine.

Ukraine has fought back with Western military support, driving Russian forces from more than half the territory they seized. In recent weeks, the front lines have been largely static, with thousands of soldiers dying in intense warfare.

Russia says its aerial strikes aim to reduce Ukraine’s ability to fight; Kyiv says they have no military purpose and are intended to hurt civilians, a war crime.

“The main thing is the fate of Russia,” Putin said in a New Year’s Eve speech to a group dressed in military uniform, instead of the event’s normal backdrop of the Kremlin walls.

“Defence of the fatherland is our sacred duty to our ancestors and descendants. Moral, historical righteousness is on our side.”

A Ukrainian drone attack damaged a power facility in Russia’s Bryansk region bordering Ukraine, its governor said on Monday, adding that there were no casualties.

Russia said last week that it shot down a Ukrainian drone close to one of long-range bomber bases deep inside its territory and that three air force personnel had been killed.