‘Russians think it will help them’: Kyiv hit by kamikaze drones

Kyiv: The central Shevchenkivskyi district of Ukraine’s capital was rocked by blasts early on Monday for the second time in a week, with Mayor Vitalii Klitshchko saying several residential buildings were damaged.

“Rescuers are on the site,” Klitshchko said on the Telegram messaging service, adding that as a result of what he said was a drone attack, a fire also broke out in a non-residential building.

There was no immediate information on casualties. 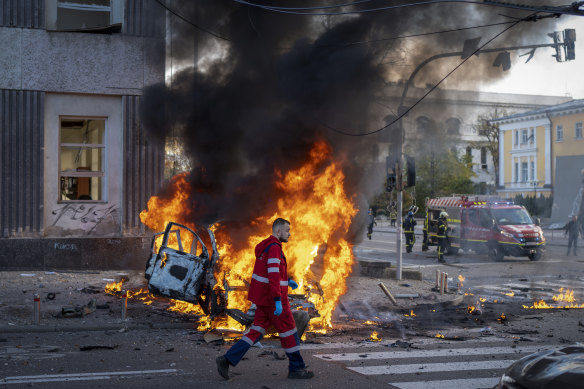 A medical worker runs past a burning car after a Russian attack in Kyiv, Ukraine last Monday.Credit:AP

Shevchenkivskiy district, a busy hub with universities, student bars and restaurants, was hit by several explosions on Monday last week when Russia ordered the biggest aerial offensive against Ukrainian cities in retaliation for a blast on a bridge linking mainland Russia to Crimea.

Andriy Yermak, head of the Ukrainian president’s staff, said the attacks were carried out with so-called suicide drones.

“Russians think this will help them, but such actions are just their convulsions,” Yermak said on the Telegram messaging app.

Ukraine has reported a spate of Russian attacks with Iranian-made Shahed-136 drones in recent weeks. Iran denies supplying the drones to Russia, while the Kremlin has not commented.