Moscow: Unshaven and puffy faced, with tubes in his nose, a patient in a hospital’s coronavirus “red zone” recorded a desperate message for Russians.

“I turned my life and my health into a disaster,” said Innokenty Sheremet, 55, who is from the Ural Mountain region city of Yekaterinburg and came down with COVID-19 after forgoing vaccination.

“I turned into an infirm old man,” he continued, describing “terrible pain from any movement.” Many employees at his TV news agency also became infected. Sheremet survived, but his news service collapsed. 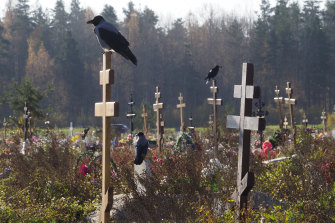 Crows sit on grave crosses in the section of a cemetery reserved for coronavirus victims in Kolpino, outside St. Petersburg, Russia.Credit:AP

In Russia, a “fourth wave” of coronavirus is setting records in daily infection and death numbers, according to official statistics.

But the truth is far worse, say independent demographers and data analysts who are challenging the pandemic data issued by President Vladimir Putin’s government and who, in turn, are facing retribution from authorities. At least three top researchers have been dismissed or have resigned from their posts in government or at state universities amid pressure from bosses.

Russia’s official statistics showed 221,313 pandemic-related deaths by mid-October, but the independent demographer Alexey Raksha calculated that excess mortality – seen by analysts as the most reliable indicator of coronavirus deaths – has reached around 750,000. Raksha’s calculation used figures maintained by Rosstat, Russia’s statistical agency. Meanwhile, a report in the Moscow Times estimated the figure at about 660,000. 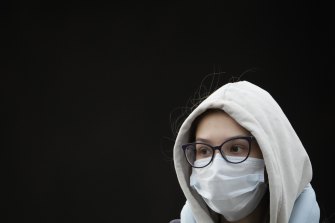 A young woman wearing a face mask to help curb the spread of the coronavirus leaves a subway in Moscow.Credit:AP

Russian independent analysts say officials manipulated statistics and underplayed the crisis, most likely for political reasons – claims that have been made about governments in other countries, including China and Turkey. Critics alleging data manipulation by governments say the practice is an obstacle to a full global reckoning of the pandemic’s reach.

The Russian Ministry of Health and Rospotrebnadzor, the government agency that publishes daily coronavirus numbers, did not respond to requests for comment on allegations of low counts. Russian official statistics exclude many deaths of patients with the coronavirus where doctors judge another major factor was to blame, such as heart failure.

“The data for [Russia] is absolutely unreliable,” said Alexei Kouprianov, an independent analyst and biologist who last year organised a community of experts on social media, Watching COVID. He was fired from the St Petersburg campus of the Higher School of Economics in September 2020.

As Putin’s government tightens political control in the country, the handling of the pandemic has largely been left to the regions. The pandemic has exposed fragilities in a system in which regional officials conceal problems for fear of losing their posts and critics – even analytical experts – are sidelined. 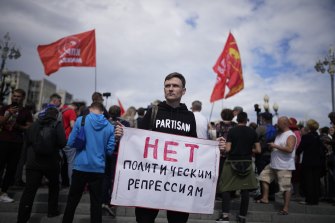 A demonstrator holds a poster reading “No political repressions” during an anti-vaccination protest in the centre of in Moscow in July.Credit:AP

Before the pandemic, life expectancy in Russia was 73 years, whereas it was 84 in countries including Australia, Italy and Spain, and its spending on health care was 5.6 per cent of GDP compared with 16.8 per cent in the United States and more than 10 per cent in Japan and much of Europe, according the Organisation for Economic Co-operation and Development.

Russian authorities say their handling of the pandemic has been better than the performance of many Western countries. But with 43 million Russians fully vaccinated by October 14, according to the Health Ministry, about 30 per cent of the 144.4 million population, Russia’s vaccination rate is one of the world’s lowest, according to data from the Britain-based Global Change Data Lab. Russia’s rate compares with 56 per cent in the United States, 65 per cent in Britain and 72 per cent in Canada.

Recently, official Russian rhetoric has shifted. Kremlin spokesman Dmitry Peskov said on October 11 that mortality rates were high because of the “unacceptably low level of vaccination,” adding that “all conditions have been provided to citizens to save their lives by getting inoculated.”

Since Russian parliamentary elections last month, officials and state media have amplified warnings about the dangers of the coronavirus. The daily coronavirus death toll hit a record 1002 on Saturday, and the country surpassed 33,000 daily infection cases, according to state-approved figures. A similar number of deaths – 997 – were recorded on Sunday.

“Actually, excess mortality now is more than 2000 people each day on average,” claimed the demographer Raksha, who was fired by the official statistical agency Rosstat last year for exposing alleged undercounting of daily deaths by the reporting agency Rospotrebnadzor. 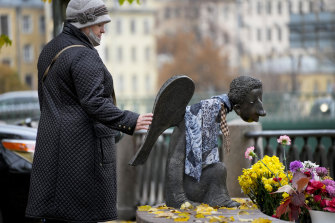 A woman touches the sculpture “Sad Angel”, a memorial for St Petersburg’s medical workers who died from coronavirus during their work.Credit:AP

Denis Protsenko, a pro-Kremlin chief of one of Moscow’s main COVID-19 hospitals, sounded the alarm on Friday, calling the situation “close to critical”.

“Guys, the coronavirus is not a joke or a fiction. It is surprising that in the second year of the pandemic, people still need to be convinced of this,” he said, calling on medical colleagues to “start talking in a frank and unadorned way to our compatriots.”

Raksha said he thinks that inaccurate statistics sent a message to Russians that the pandemic had been beaten and therefore left space for COVID conspiracy disinformation and anti-vaccination propaganda to flood Russian social media.

“In Russia, the COVID dissidents won,” he said.

Raksha says he never uses Russia’s official daily statistics on infections and deaths, and “I don’t recommend anyone to do it.” In Russia, a regional official typically “just draws a line by hand to flatten the curve,” he said. “They are just making up numbers, literally.”

One of his prized possessions is a Soviet statistical yearbook from 1987, one of only 100 copies from the period in 1974 to 1988 when demographic statistics were kept secret. He sees a parallel now: The few Russians who follow the social media pages of reliable independent analysts can find a more accurate picture.

Another independent data expert, Alexander Dragan, monitors regional coronavirus surges by tracking searches on Yandex, Russia’s search engine, and on Google. The correlation with excess mortality has been striking, he said.

Tatiana Mikhailova an economist and expert in data analysis, formerly of the prestigious Russian Presidential Academy of National Economy and Public Administration, discovered a pattern in many Russian regions’ reporting on daily cases. Instead of the familiar pandemic curve, the overall case numbers swung wildly in regional reports. Numbers for the main city in a region went up one day and the rest of the region’s numbers went down – as if the city and the wider region were taking turns in experiencing surges.

“I discovered this strange pattern in many regions that basically told me that the official statistics are lying,” she said. “They just underreport the cases that they have so as not to show the growth of cases.”

After she published her graphs, the academy blocked her from giving interviews, and she resigned rather than be silenced.

“If you are working on issues that are critical for society, you have to speak to the press because you have to make your results known to the public,” Mikhailova said. “I think it’s your duty as a scientist.”

Doctors are afraid to speak out about the crisis, said Semyon Galperin, the head of the Doctors’ Defence League, an independent association. He said the crisis was sharpened by Russian health system reforms under which more than half the nation’s hospitals and clinics shut down between 2000 and 2015 and thousands of medical workers left the profession.

“The result of these reforms is a broken system,” he said. Unreliable information about the pandemic and vaccines made it worse, he added.

“We don’t know what is going on. Nobody can say what the exact situation is,” he said. “Nobody trusts anyone anymore.