Yarra City Council has given a private school in Melbourne’s inner north a Tuesday deadline to permanently open its front gates to the public so people can walk or ride through the school to reach a nearby creek, a move the school claims will put children’s lives at risk.

Parents and students of Alphington Grammar School plan to rally at the school gates on Tuesday morning in a last-ditch fight against the council’s demand, which pits them against a community campaign to increase local access to public open space. 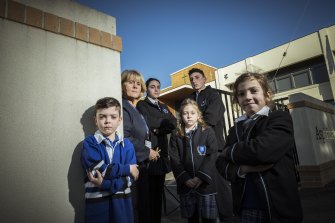 Yarra City Council has given the school an ultimatum: remove its gates or the council will do so and send the school the bill.

The council plans to reopen Old Heidelberg Road, a dead-end street that runs through the grounds of Alphington Grammar School that the school says has been closed since 1953,following a unanimous council vote last year to do so.

This is despite VicRoads having rejected the idea as unsafe, finding that allowing pedestrians and bike riders onto school grounds “would create a safety risk for all users throughout the day with children moving between school buildings, and particularly during Alphington Grammar school pick-up/drop-off times”.

VicRoads also cited the steep terrain down to the creek, a need to remove trees, the risk of causing erosion on the creek banks and significant expense of the proposal as further reasons not to build a new link to the creek through the school.

Instead, the Andrews government is building a separate off-road path a short distance south of the school to connect residential Alphington to the Darebin Creek Trail at a cost of $9.1 million.

Principal Dr Vivianne Nikou has urged the school community to join it in opposing a plan she said defied all logic. The road runs past the school’s early learning centre, an outdoor playground, and classrooms used by primary school students.

The school already has had to contend with intruders breaking into bathrooms and leaving rubbish, drug paraphernalia and dog faeces on school grounds, it said in a submission to the council. 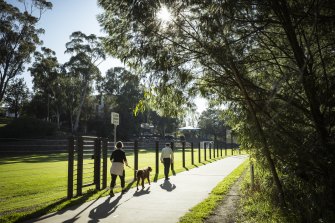 Walkers on the Darebin Creek Trail next to Alphington Grammar School.Credit:Chris Hopkins

Jeremy Lawrence, president of community group Streets Alive Yarra, said there was a principle at stake: a private entity such as a non-government school should not be permitted to take public land for its own exclusive use.

“There is a public street and they put a gate in front of it; in other words, they are appropriating public land,” Lawrence said.

The school was last month given a deadline of May 16 to remove its gates, but it has defied the directive, leading the council to set a second deadline of Tuesday or else it will remove the gates and “seek to recover its costs”.

“Council has run an extensive consultation process, and has received overwhelming community support for public pedestrian access to be restored.”

Nikou, who said she had been losing sleep over the issue, has urged parents to rally against “a group of vocal local residents who wish to have public access to Darebin Creek via Old Heidelberg Road.

“I trust that families are equally as disappointed and outraged by the lack of transparency displayed in the said consultation process and will use their voice accordingly to raise the matter with local members and the like,” she emailed parents on Friday.

“This is a matter the school cannot address alone. It needs the voice of our school community.”

The council received more than 300 submissions for opening the road, and 14 against.

The school has submitted to the council a list of serious concerns it holds, saying reinstating public access to Old Heidelberg Road is inconsistent with mandatory child safe standards.

”It is incredibly traumatic for young children to be confronted by strangers when they should feel safe within their own schoolgrounds, and this has occurred several times within recent years,” it said.

“Teachers on yard duty and overseeing outdoor sporting activities regularly need to discourage clearly undesirable persons who are loitering for the purposes of wanting to photograph students … I trust the seriousness of the dangers we face daily will be heeded before a tragic and foreseeable incident involving one of our children occurs.”