A primary school has closed for the day and smoke is billowing over three inner-city suburbs after a factory fire in South Melbourne overnight.

About 46 firefighters were called to a brick factory engulfed in flames and showing signs of collapse on the corner of Ferrars Street and Buckhurst Street just before midnight on Wednesday. 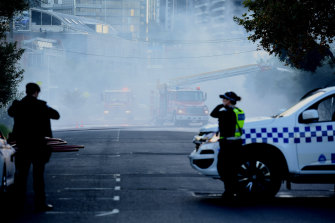 It took two hours to bring the fire under control.Credit:Joe Armao

By the time crews had arrived the fire had already consumed half of the factory and was threatening nearby properties including South Melbourne Primary school.

The fire was brought under control in just over two hours with no injuries reported. 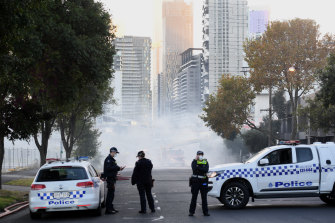 Half of the 50 by 60 metre factory was destroyed before fire crews arrived.Credit:Joe Armao

Victoria Police are now investigating the cause of the fire.

South Melbourne Primary issued an alert to parents on Thursday morning not to send their children to school.

Officers from the Environment Protection Agency are heading to the scene to provide advice about any environmental impacts from firewater or smoke. A spokesman said there were some cardboard and plastics stored in the factory.

An advice alert is in place for residents of South Melbourne, South Wharf and Southbank to be aware of the smoke likely to be in the area for hours to come.

Those who are sensitive to smoke should close windows and doors and turn off heating and cooling systems, according to VicEmergency. 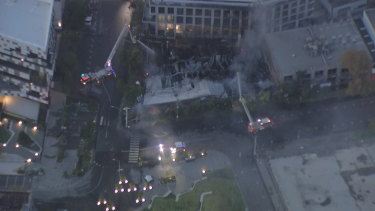 The brick factory was threatening to collapse when firecrews arrived.Credit:Nine News Melbourne

“To prevent the smell of smoke entering your home or business you should close windows and doors,” the advice reads.