‘It feels almost as if I have never been away’: Scottish Tory leader Ruth Davidson returns to work following six months of maternity leave after giving birth to her son Finn in October

Scottish Conservative leader Ruth Davidson MSP has returned to work after giving birth to her son Finn in October.

As a new mother, the MSP acknowledged her return to work as something of a baptism of fire and said she was ‘never one to do things the easy way’.

Speaking live from Aberdeen at the Scottish Conservatives annual conference she said: ‘Instead of easing myself in gently, I have gone from zero to 100 miles an hour.

‘Party conference this weekend, then back at my desk at Holyrood and then into First Minister’s Questions against Nicola Sturgeon at the start of next week.’ 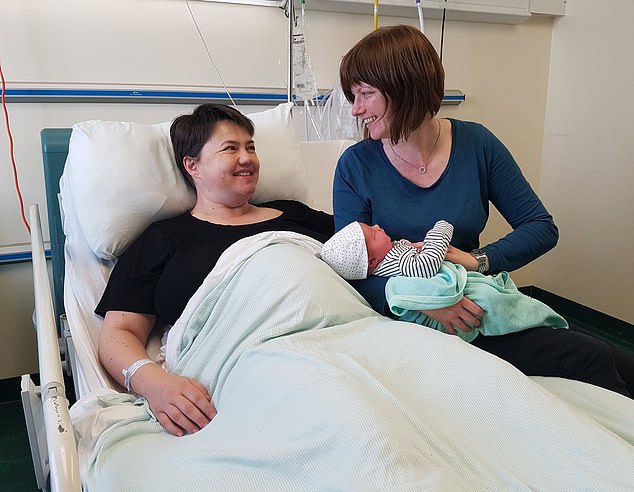 Ruth Davidson pictured above after giving birth with her partner Jen Wilson, back in October 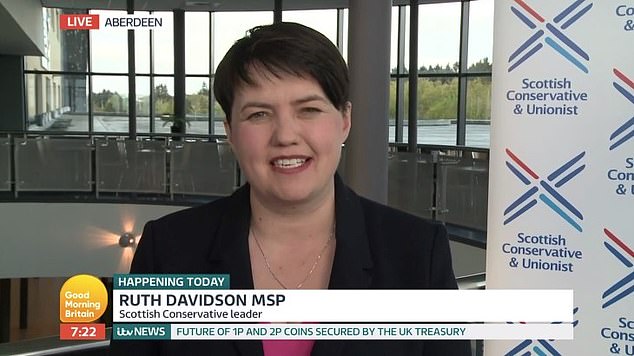 Speaking on Good Morning Britain, Ruth said she might have ‘jellyhead’ after having returned to work

Speaking to Good Morning Britain presenters Kate Garraway and Ben Shepherd, she revealed that she might have a touch of ‘jellyhead’.

She said: ‘If I say words that make no sense in a sentence you will know exactly what this is about.

‘I keep losing nouns. I try to find the word for ‘chair’ and say ‘coat’ and things like that. But I am sure I will get myself back up to speed.’

Ruth and her partner Jen Wilson welcomed Finn into the world on October 26. he weighed 10lbs and was born at the Edinburgh Royal Infirmary.

Ruth admitted that it had been difficult watching Brexit from the sidelines whilst being off on maternity leave.

The MSP said it had been hugely frustrating and highlighted that taking a step back meant she could look at the situation from fresh eyes. 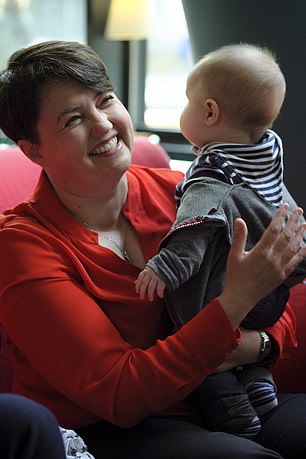 ‘It doesn’t surprise me that we have seen in England in the local elections what looks like is going to be a plague on both your houses for Conservatives and Labour for not getting a deal done.

‘I think there is a real frustration and even sometimes edging into anger out there… All the politicians said Brexit was such a big issue, it couldn’t just be decided by politicians… it had to go to a referendum and the people’s answer would be listened to.

‘And now, three years down the line, it has still not happened yet… I do understand the frustration that is out there and I think what we are seeing overnight should really focus minds…to get that deal through so we can have an orderly Brexit.’

Ruth Davidson has been with her partner Jen Wilson since 2014. Jen works as a marketing assistant and the couple had decided to keep their romance under wraps during the early stages of their relationship.

They announced their engagement on May 23, 2016, after Ruth proposed to her while on holiday in Paris.

As a new mother, she also commented on the Gavin Williamson debate, saying it wasn’t something she would personally do.

‘I have to say I judge [Finn] as the most precious thing in my life and I can’t imagine that would be the sort of language that I would ever invoke.’