Seattle police released bodycam video of officers rushing toward the wreckage of a burning car and pulling the driver – a convicted felon – to safety after they say he crashed into a tree while trying to evade police Monday night.

Patrol officers first spotted the man staring down at his cellphone while driving a white sedan on Martin Luther King Jr. Way at around 9:40 p.m., police said. When officers tried to stop him, the driver sped away.

The car was later located in the area after crashing into a tree on the residential street. The driver, whose name was not immediately released, was still inside the wrecked sedan when officers arrived. 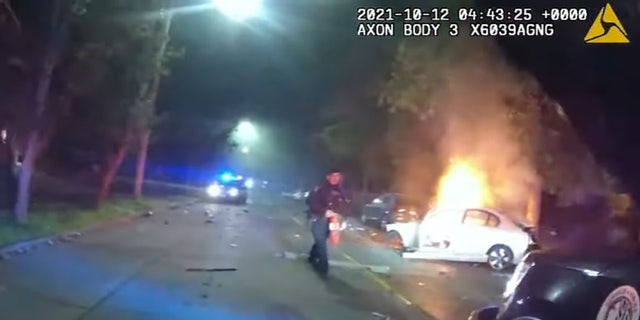 The driver, the sole occupant of the vehicle, crashed into a tree in the 1800 block of Martin Luther King Jr. Waywhile evading police on Monday night.
(Seattle Police Department)

The impact from the collision sent car parts, including a tire, flying across the street and into nearby fences. Debris also damaged an unoccupied vehicle and at least two homes, police said.

Bodycam video shows an officer rushing to the driver and pulling out a knife to cut off the man’s seatbelt as the car catches fire. Officers and a bystander are seen pulling the man to safety just before flames engulf the vehicle. 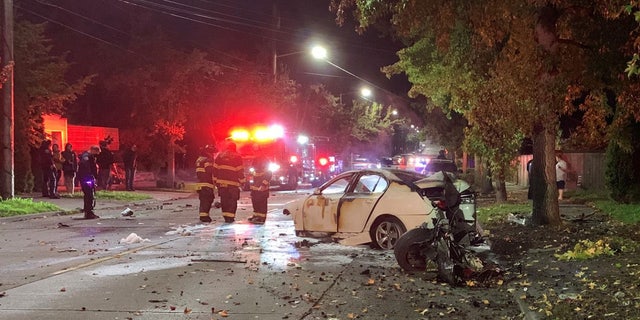 Pieces of the car flew off on impact with a tree and damages nearby homes and an unoccupied vehicle on Martin Luther King Jr. Way in Seattle on Monday night.
(Seattle Police Department)

Police said that rounds of ammunition in the vehicle began to explode from the fire. No one was injured by the exploding rounds and police later recovered a firearm and magazine from the scene.

Seattle firefighters put out the fire and paramedics rushed the driver to Harborview Medical Center in serious condition. 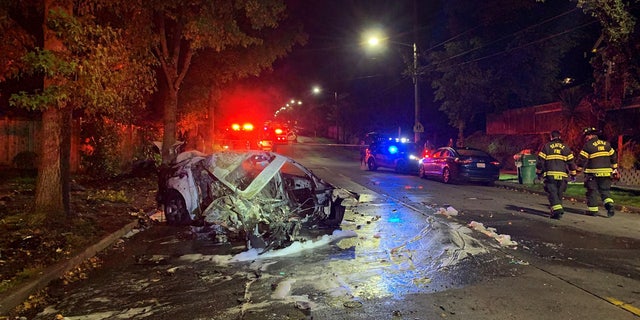 Police said the man would be placed under arrest when he is released from the hospital.

He faces charges of eluding and unlawful possession of ammunition.

The driver also had warrants out for his arrest at the time of the crash, including a domestic violence-related warrant for assault in the second degree, harassment, property damage and violation of a no-contact order.