An ‘arrogant and selfish’ van driver was found guilty of killing an off-duty police officer on her bicycle while using Facebook on his mobile phone.

Self-employed carpenter Draper claimed he passed the phone to his ‘cantankerous’ 13-month old son Ted in the back seat of his Transit van.

But a jury heard the infant did not have the manual dexterity to double click or swipe the screen of the mobile. 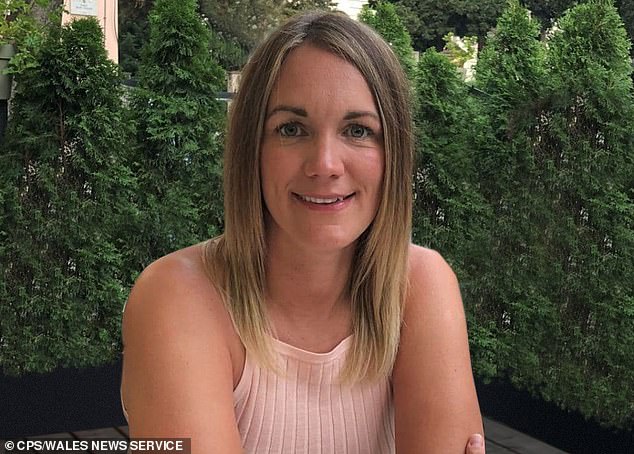 Mother-of-one and Dyfed-Powys Police officer, Sgt Lynwen Thomas, was killed outright at the scene of the accident

Draper was seen veering across the A40 near Carmarthen, West Wales, before hitting amateur triathlete Sgt Thomas in February 2021.

Prosecutor Carina Hughes said: ‘Draper was actively using his mobile phone – the standard of his driving fell far below what is expected of a competent and careful driver.

‘Lynwen Thomas was killed outright at the scene of the accident – she paid the ultimate price.’

In a police interview, Draper said he passed the phone to his son Ted because he ‘liked to look at it’, Swansea Crown Court heard. 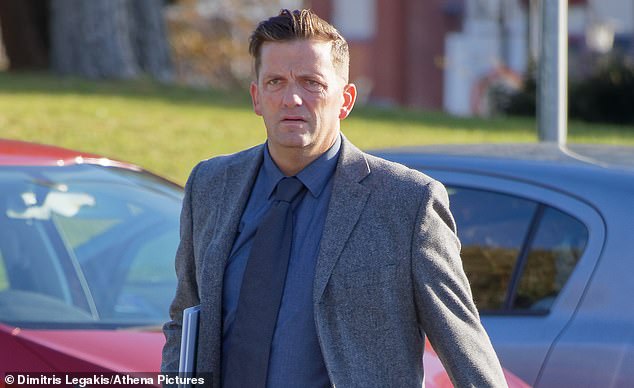 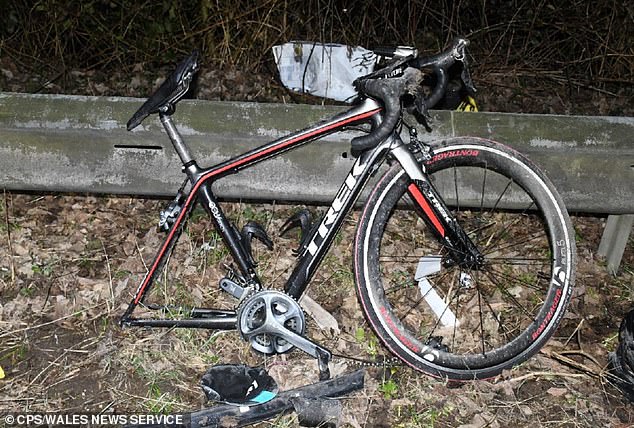 Photos of Sgt Thomas’s wrecked £4,000 racing bike (pictured) were shown in Court during the five-day trial 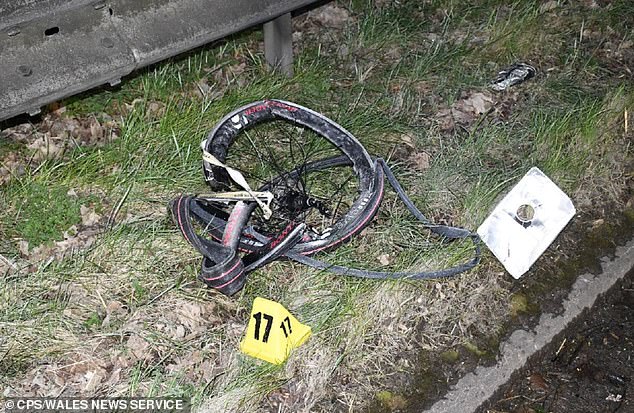 He said he gave the phone to Ted to ‘soothe him’ and did not see the cyclist because he looked back at his son for a split second.

Dr Mohammed Rahman, a paediatrician for 30 years, told the jury a 13-month-old child cannot access apps on a mobile phone.

He said: ‘They may have developed a pincer grasp but to do a specific movement like a double click is not possible.

‘It takes much more development before that can be achieved.’

Asked by Ms Hughes if he thought the baby was using the phone at the time of the fatal accident he said: ‘He would not have the mental ability to specifically look for applications and launch them either intentionally or unintentionally.’

Driver Ashley Croaker, who was behind Draper’s van, told the court: ‘I saw it cross the line in the middle of the road – I thought the driver was distracted.

‘I pulled back a bit, I could see the van kept veering to the left. It went over the white line a few times.’ 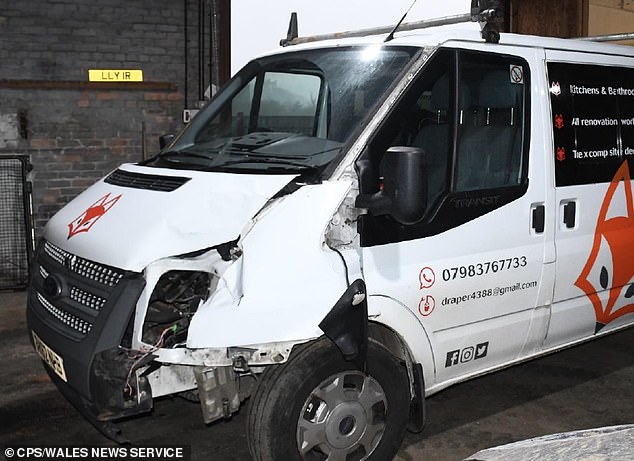 Driver Ashley Croaker, who was behind Draper’s van, told the court that she could see the van veering to the left and thought that the driver was distracted 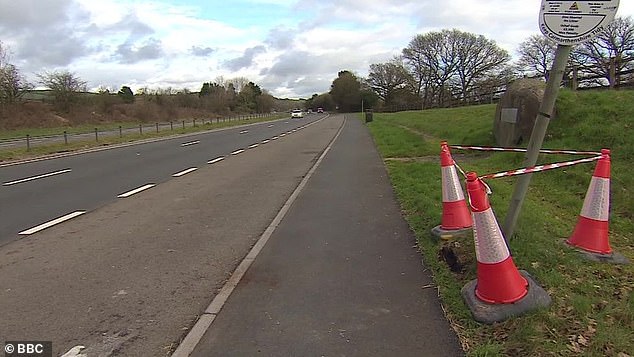 The court heard Draper switched from Instagram to Facebook at 6.42pm just a minute before his van slammed into off-duty Lynwen from behind as she rode along the A40 in Carmarthenshire (pictured)

Mrs Croaker said she was travelling at 65mph and the Transit van was pulling away from her car.

The jury was shown dash-cam footage from Mrs Croaker’s car with the moment of impact with Sgt Thomas edited out.

Pictures of Sgt Thomas’s wrecked £4,000 racing bike and damage to Draper’s white van were also shown to the court during the five day trial.

Dyfed-Powys Police officer Sgt Thomas, a mother-of-one, was an experienced triathlete with a ‘thirst for life’ and had taken part in a sponsored cycle ride from John O’Groats to Land’s End.

She was wearing reflective clothing and there was a bright light on her pedal cycle on her evening bike ride.

Father-of-two Draper, of St Clears, Carmarthen, was given bail but is facing jail when he is sentenced next month. 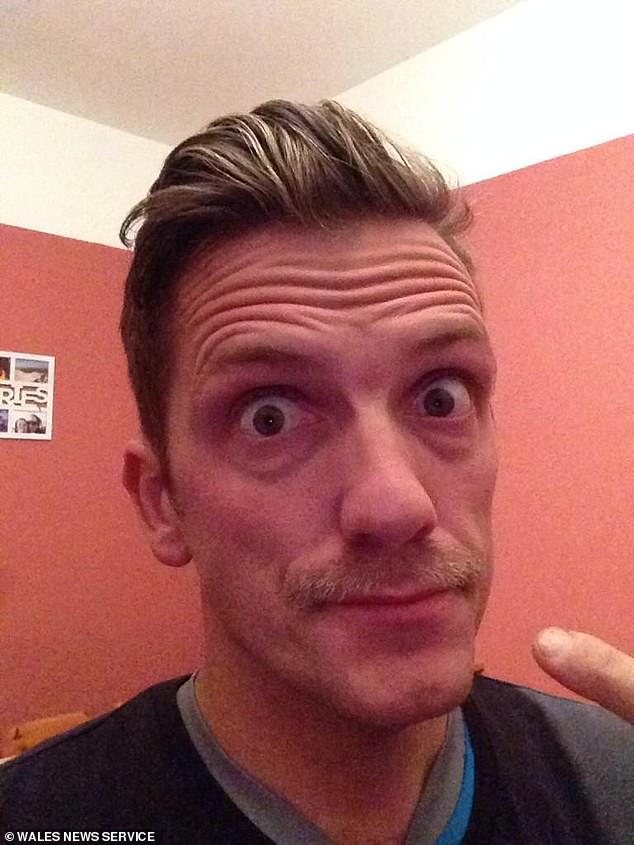 After the case Sgt Thomas’s family said it had been a ‘long and painful’ 20 months since the collision but they had finally seen justice served on the person responsible for taking her away from them.

Sgt Sara John who investigated the fatal collision, said: ‘Yet again, we see the utter senseless and unnecessary devastation caused by using a mobile phone whilst driving.

‘Lynwen was less than 10 minutes away from home when Draper, who was persistently using his iPhone at the wheel, collided with her whilst she was cycling along the A40.

‘Lynwen was a respected colleague and a loving mother, daughter, sister and partner who was taken far too soon due to the arrogant and selfish actions of the defendant which have left a young child without their mother.’