His claims, which would mean the company is breaching the rules set by the state government, are supported by pages of leaked documents, rosters and emails obtained separately by The Age. 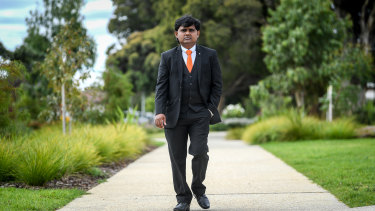 Finny Matthew, a nurse of 14 years, was shocked by what he saw at the Park Royal Hotel at Melbourne Airport.Credit:Justin McManus

Finny Matthew, a nurse for 14 years, said he was so shocked by what he saw working at the Park Royal Hotel at Melbourne Airport that he wanted to go public with his story.

He says the state’s quarantine program is not prepared for the resumption of flights and he has taken his complaints to the Victorian Ombudsman and WorkSafe.

The Andrews government barred hotel quarantine staff from moving between multiple hotels, in accordance with a recommendation of the Coate inquiry.

That inquiry was called to examine failings in the Victorian system after security guards on the program became infected with coronavirus and inadvertently spread it into the community, sparking a second wave of infections that led to more than 800 deaths.

The Age can also reveal that in the days leading up to the five-day snap lockdown triggered by the Holiday Inn outbreak, minutes from a meeting were circulated to nursing staff detailing problems plaguing the beleaguered hotel quarantine program. The minutes reveal pharmaceutical products were delayed, staff hadn’t completed online and face-to-face competencies and complaints of “tough” and “unfair rostering”.

Mr Matthew, a registered nurse who has worked in detention centres treating asylum seekers, started in his role in December as an infection and prevention control nurse. He said he was asked to swab international travellers for COVID-19 despite receiving no training.

He said he contacted his manager to raise concerns about the lack of training and to discuss why nursing staff were moving between quarantine hotels.

Mr Matthew, who quit last week citing bullying and harassment after he questioned protocols in the quarantine program, said he wanted to speak out as it was “the right thing to do”.

“I feel seriously worried about the quarantine system in Victoria,” Mr Matthew said.

“I believe what is happening is not what is being presented to the public.”

Last month the chief executive officer of Healthcare Australia resigned after one of the company’s doctors gave two aged care residents four times the correct dose of the COVID-19 vaccine. It was later revealed the doctor had not completed the compulsory vaccination training.

At the time, COVID-19 Quarantine Victoria confirmed a “small group” of employees travel between the company’s St Kilda Road headquarters and quarantine hotels.

Leaked emails seen by The Age show that nurses were being asked to work at multiple hotels up until last month when the Premier Daniel Andrews requested all flights to Melbourne stop as the state battled a spike of coronavirus cases.

In one email, dated January 29, Healthcare Australia called for “an extra set of hands” at the Mercure Welcome on Little Bourke Street. Earlier, on January 13, nurses looking to “do any additional shifts” were asked to work at the Park Royal Melbourne Airport hotel.

In a third email from on December 10, nursing staff were told of a “shortfall in support” at Tullamarine Airport. “We are desperate to fill these shifts,” the email said.

“Shift will be assisting in temperature checks and assisting the team through the day/evening.” The email train shows that a nurse who had been working at a quarantine hotel housing returned travellers agree to work the airport shift.

In a statement, Healthcare Australia said it “abides by all the conditions of site exclusivity specified in its contract with CQV”.

“Our nursing staff work only at the hotel they are allocated to and requests for extra shifts are for existing staff at that particular hotel.

“We maintain the highest standards of training and all our staff must compete on-site, face to face practical competency training before treating residents. Site exclusivity has been maintained in accordance with the requirements of CQV.”

A spokesperson for COVID-19 Quarantine Victoria, tasked with operating hotel quarantine for the Andrews government, said the organisation had “a clear site exclusivity policy and Healthcare Australia (HCA) staff are not permitted to work across different quarantine sites.”

“HCA staff, including nurses, doctors and Allied Health and mental health clinicians, must undergo mandatory training prior to their first shift and also undertake on-site training,” the spokesperson said. 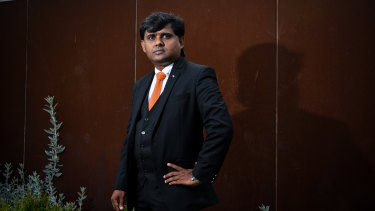 Finny Matthew says he is speaking out to avoid another COVID-19 outbreak in Victoria.Credit:Justin McManus

“Their work is mostly done via telehealth, with face-to-face contact with residents confined to COVID-19 testing and essential physical assessments or treatment (for example in emergency situations).

“As with all on-site staff, they are required to undergo daily testing and follow the program’s strict infection prevention and control measures.

“Under CQV’s strengthened model, there are clear pathways for any issues or concerns to be raised and we’d encourage any staff members to report matters directly to HCA or CQV.”

The job ads were circulated via email to Melbourne doctors after many doctors working for the company quit in the first two months of the revamped quarantine program. The squeeze on the supply of doctors tightened further in February when, in response to the Holiday Inn outbreak, health networks said doctors could not work at hospitals if they were also working at hotels.

One job ad states a doctor would work across both the Pullman and Mercure hotels.

The ad also states that Healthcare Australia will accommodate doctors who are also working at other workplaces like private GP clinics.

“If you are working elsewhere, we will advocate for an exemption on your behalf (n/a for telehealth position),” the email states.

A separate nursing contract from Healthcare Australia, states: “The company may require you to transfer to another location, or to perform work at other locations from time to time, or on a permanent basis, in accordance with the needs of the business, provided such a requirement is reasonable”.

Last month The Age revealed an anonymous quarantine worker had made a formal complaint to WorkSafe Victoria due to staff working at multiple sites. Mr Matthew has contacted both Work Safe and the Victorian Ombudsman with his concerns about the program.

“When the quarantine project came up, I thought that although it might be risky, it was a great opportunity to give back to the state which has given me so much,” he told The Age.

“I thought I can do my best so that we don’t go back into a lockdown.”

He said many of his patients battled mental health issues as they were stuck in their homes and felt they had no quality of life.

“I wanted to help the fight so we didn’t go into another lockdown.”

Mr Matthew, who was a member of the Liberal Party for 12 months about six years ago, said he wasn’t politically motivated and believed the Victorian government may be unaware of what was happening inside the quarantine hotels.

“I am not Liberal and I’m not Labor, but this system has to be right,” he said. “I am so concerning that this state will not cope with another lockdown.”

Get our Coronavirus Update newsletter

Stay across the news you need to know related to the pandemic. Sent Monday and Thursday. Sign up here.