Shane Warne’s eccentric state memorial won over even the cynics

When comedian Andy Lee played the late Shane Warne’s Leggo’s pasta sauce commercial to the MCG on Wednesday night, anyone would be forgiven for forgetting that this was, in fact, a state memorial service.

“I served up some amazing things with this hand,” Warne said in Italian, doing his absolute best to try to make the words flow together like they came naturally to him. 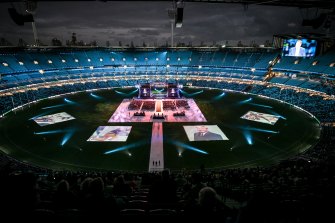 The state memorial service for Shane Warne at the MCG.Credit:Eddie Jim

It wasn’t how we might have imagined we were going to hear the voice of the man we, as a country, were mourning. But like so much of the service, even if it wasn’t what we thought we needed, it was still perfect.

Even the biggest cynics would’ve been moved.

Every pop star who performed played their biggest hit, because it was “Warnie’s favourite”. 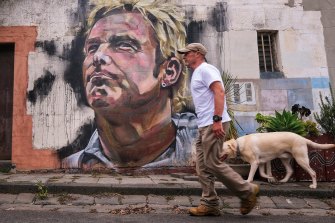 His simplicity was the simplicity of walking into the dressing room with shopping bags stuffed with money he’d won at the casino, as he did in an anecdote told by Andrew Symonds in the very first story to make it to the broadcast audience.

“Cash is king,” Warne told the man they call Roy.

It’s the kind of simplicity that looks at an England team who scored over 500 in their first innings, in a Test looking destined for a draw, and shrugs, “bowl them out”.

And the kind of simplicity that thinks, why not email the producers of world-wide streaming hit Peaky Blinders and ask if a tall, tanned, blonde, 50-year-old Australian sports superstar might fit into the background of a scene set in 1919 Birmingham?

Isa Guha told the television audience about the simple kindness of him wanting a colleague to succeed, of turning to her during a broadcast and asking for her expertise, and the simplicity of choofing darts on a speed-run down the highway to London.

The straightforward love Warne had to tell his children they could rise to life’s challenges, to say please and thank you and to be happy.

Sportspeople are often held up as geniuses, and some ridicule that. But for those who worship at the altar of sport and watch these figures triumph and fail and triumph again, we know it is a real genius. Who but a genius can look all the chaos and fear and judgement in the eye and again and again: keep it simple.

Scott Mitchell is a journalist based in Melbourne.