Shoppers are set to splurge their savings in summer spending spree

Britain roars out of lockdown: Shoppers are set to splurge their savings in summer spending spree – while experts predict economy is on course for best year of growth since WWII

Shoppers in Britain are set to spend their savings in a summer spree after consumer confidence in Britain saw its highest jump in at least a decade following the post-lockdown roadmap being revealed, economists said today.

Deloitte’s consumer tracker reported a record quarterly rise in confidence in the first three months of the year, up six percentage points to -11 per cent, with every sub-measure up both year-on-year and quarter-on-quarter.

The figure represents the net percentage of consumers who said their confidence had improved in the past three months, and it was compiled from responses given by more than 3,000 Britons between March 19 and 22.

Now, net discretionary spending is expected to become positive for the first time, which means that the number of consumers who think they will spend more is higher than those who expect to spend less.

The activity of ‘going to a shop’ was put at the top of a list of leisure activities Britons are most likely to do post-lockdown, with nearly two thirds of people saying they expect to return within a month of being allowed.

It comes as cafes, beer gardens, non-essential shops and museums reopened in Scotland today as lockdown easing continues – two weeks after outdoor hospitality and retail welcomed back consumers in England. 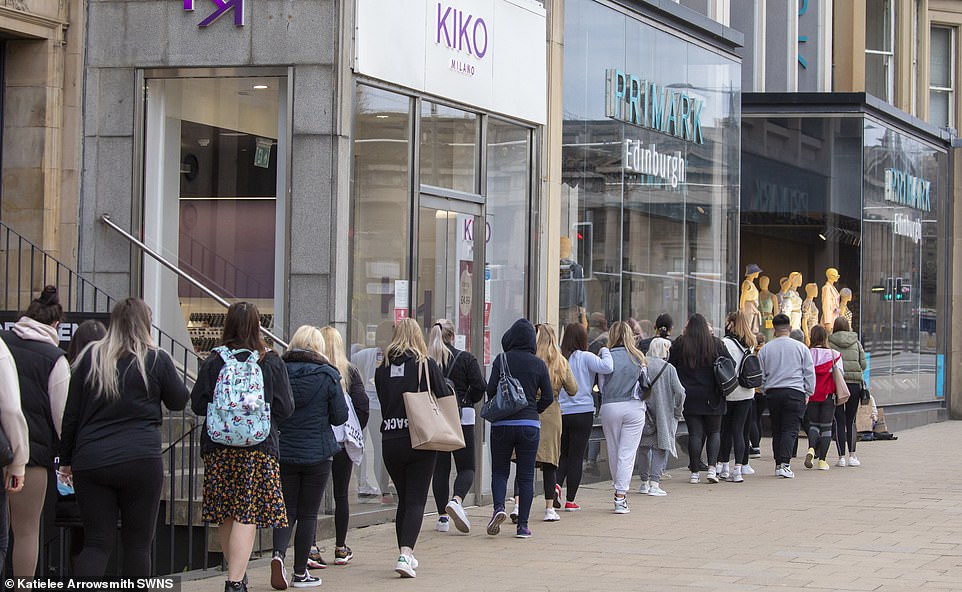 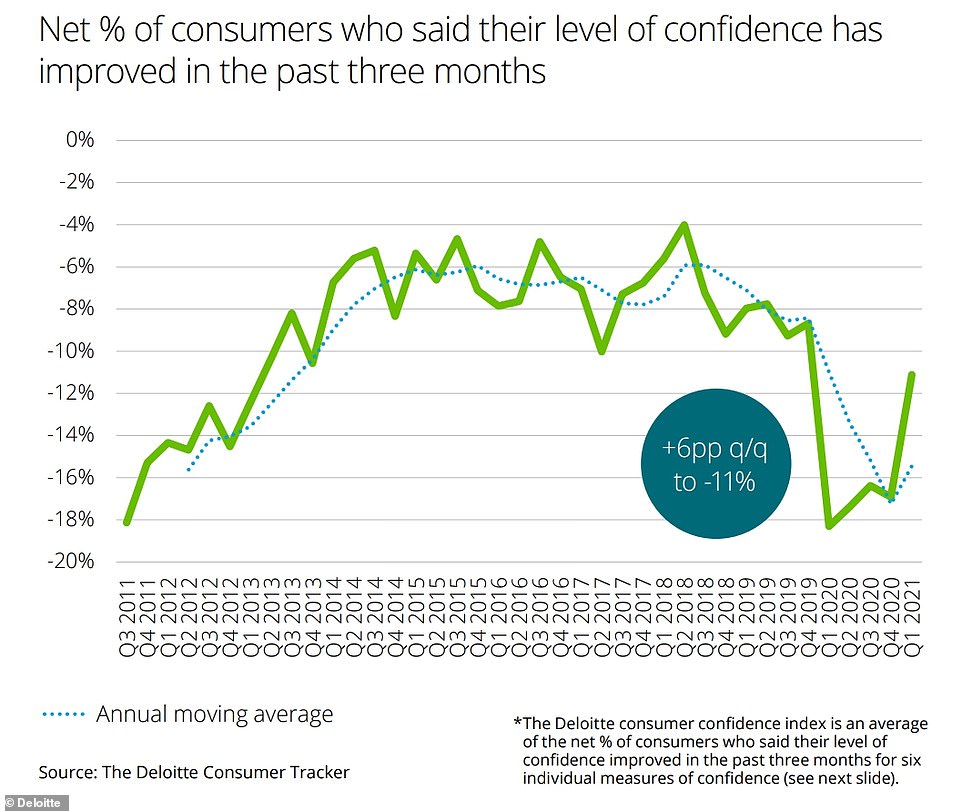 Deloitte’s consumer tracker saw the highest jump in confidence at least a decade, after the announcement of a roadmap for lifting Covid restrictions. The tracker reported a record quarterly rise in confidence, up six percentage points to -11 per cent 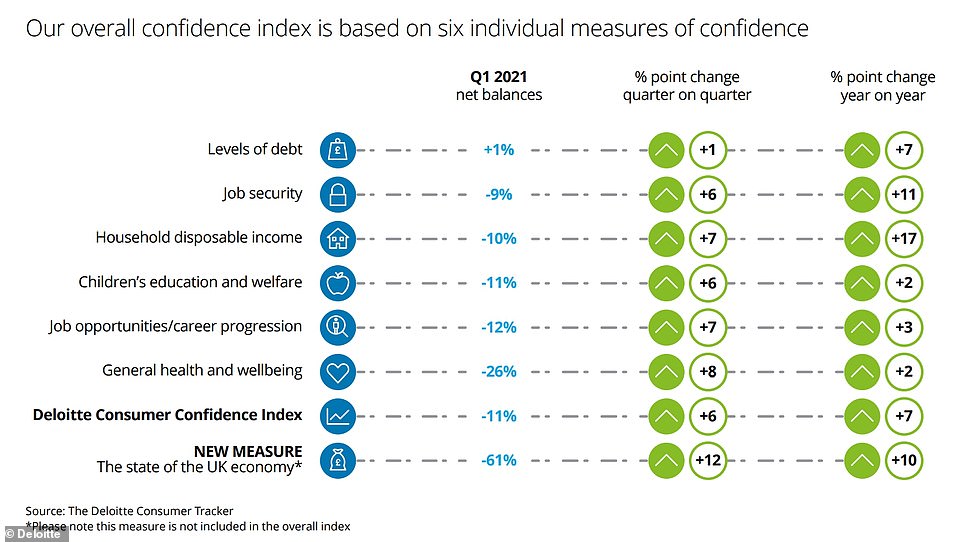 Every sub-measure of consumer confidence was up both year-on-year and quarter-on-quarter, according to Deloitte’s study 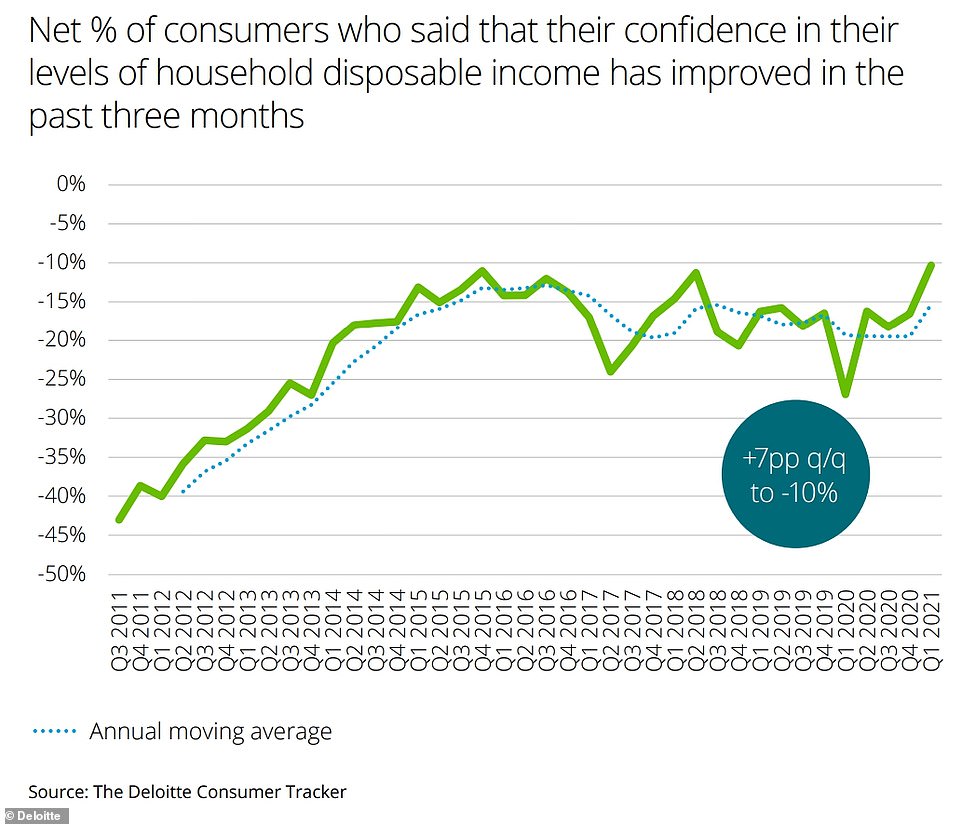 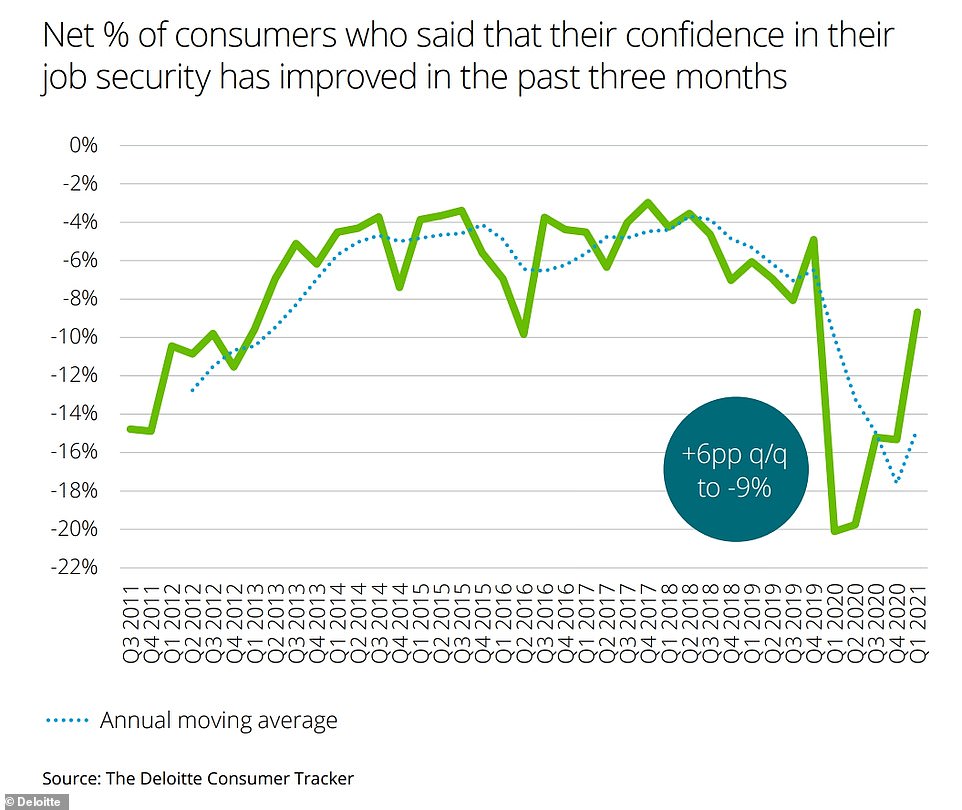 Consumer confidence in job security over the past three months has also risen, by six percentage points to -9 per cent

Among the sub-measures of confidence seeing rises were children’s education and welfare which was up by six points to -11 per cent, while sentiment over health and wellbeing increased by eight points to -26 per cent.

Household disposable income was up seven points to -10 per cent – while confidence in debt moved into positive territory at 1 per cent, for the first time in ten years since the tracker index began in 2011.

Early-morning queues formed outside shops on Edinburgh’s Princes Street of shoppers keen to snap up a bargain in person.

The country moved from Level 4 to Level 3 of the Scottish Government’s five tiers of restrictions today.

First Minister Nicola Sturgeon announced last week that the continued suppression of coronavirus and the success of the vaccine rollout meant some restrictions can be lifted on Monday. It means gyms, swimming pools, libraries and museums can reopen along with cafes, restaurants and beer gardens.

Hospitality will need to close at 8pm indoors, with alcohol only allowed to be served outside. People will be able to meet others for a meal or drink, with up to six people from two households allowed to socialise indoors in a public place such as a cafe or restaurant.

Other changes include the resumption of driving lessons and tests while close contact services, such as beauty parlours, can also return.

Funerals and weddings – including post-funeral events and receptions – will be allowed to take place with up to 50 people and alcohol permitted. Travel between Scotland, England and Wales will be permitted and tourist accommodation can welcome back visitors.

Ian Stewart, chief economist at Deloitte, said: ‘The UK is primed for a sharp snap back in consumer activity. High levels of saving, the successful vaccination rollout and the easing of the lockdown set the stage for a surge in spending over the coming months.’

He added: ‘The eventual peak in unemployment looks set to be far lower than had been feared, and far lower than following any downturn in the last 30 years.’

It comes as experts at EY Item Club predicted Britain’s economy is on course for its best year of growth since the Second World War.

In an upbeat forecast today, economists at the think tank have upgraded their prediction of GDP growth for 2021 from 5 per cent to 6.8 per cent.

That would be the highest postwar growth rate, surpassing the 6.5 per cent recorded in 1973.

They also say the economy is expected to regain its pre-pandemic size by the second quarter of 2022 – earlier than a previous forecast – because Britain had proved ‘more resilient than seemed possible’.

Howard Archer, the chief economist, said: ‘Businesses and consumers have been innovative and flexible in adjusting to Covid-19 restrictions and, while restrictions have caused disruption, lessons learned over the last 12 months have helped minimise the economic impact.

‘Our latest forecast suggests that the UK economy will emerge from the pandemic with much less long-term scarring than was originally envisaged and looks set for a strong recovery over the rest of the year and beyond.’

EY also revised down its forecast for peak unemployment, from 7 per cent to 5.8 per cent, which it says will occur in the final three months of this year.

Meanwhile footfall figures in London’s West End have been tracking well ahead of the previous reopening in June 2020. The second Saturday, April 24, saw footfall around 57 per cent of the usual number of April visitors.

Jace Tyrrell, chief executive of New West End Company, which represents 600 businesses on Oxford Street, Bond Street, Regent Street and in Mayfair, said: ‘With the continuation of the warm weather heading into the weekend, we were delighted to see Londoners making the most of the sunshine and heading back to the West End to refresh their spring wardrobes and enjoy time with friends and family in outdoor spaces.

‘We’re encouraged by the sustained levels of footfall that we’ve seen in the district, already tracking well ahead of the first reopening in June 2020. However, it is imperative that businesses continue to be supported in the right ways to help them recover. 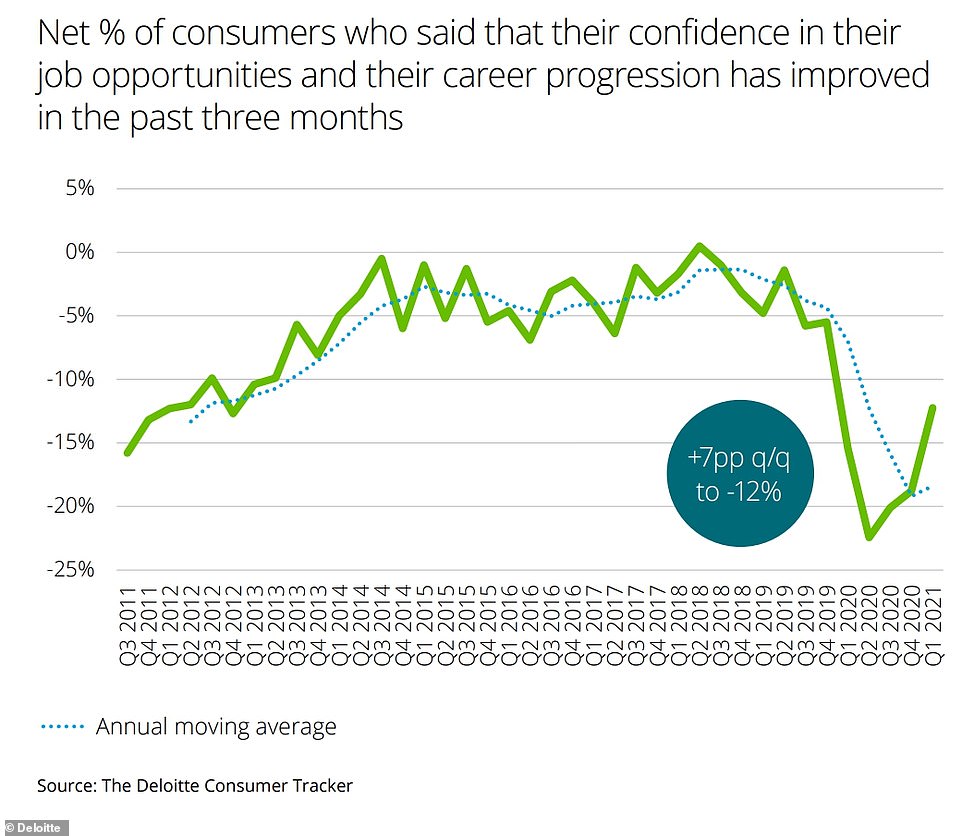 Consumer confidence in job opportunities and career progression has also improved this year, according to Deloitte’s study 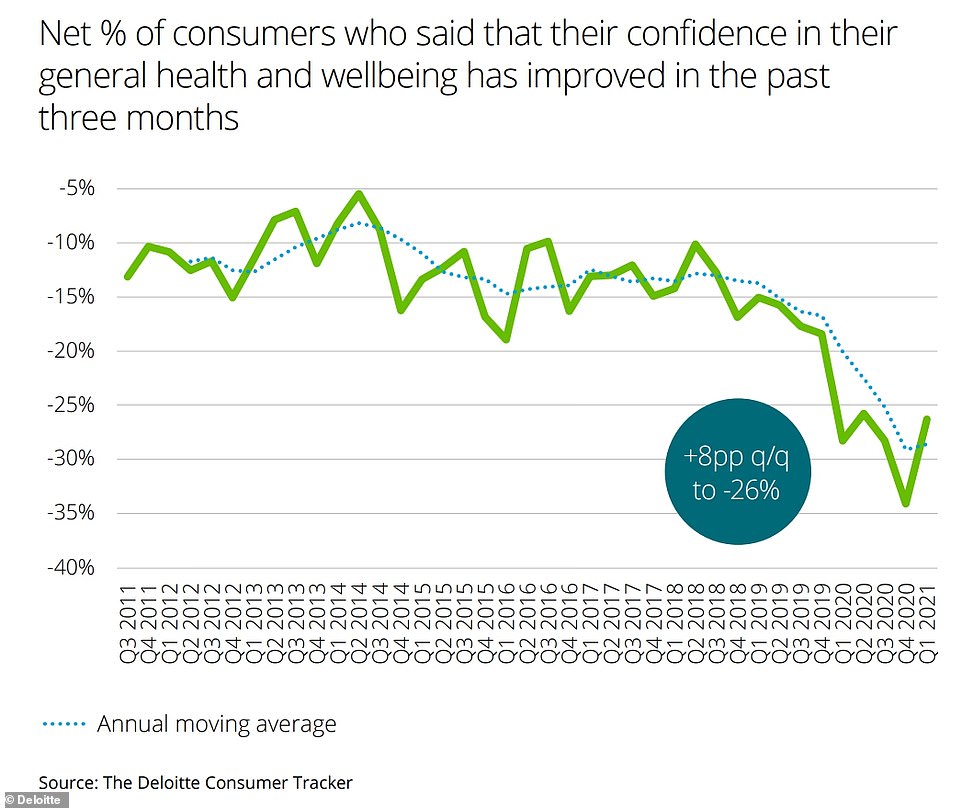 Among the sub-measures of confidence seeing rises were children’s education and welfare, up by six points to -11 per cent 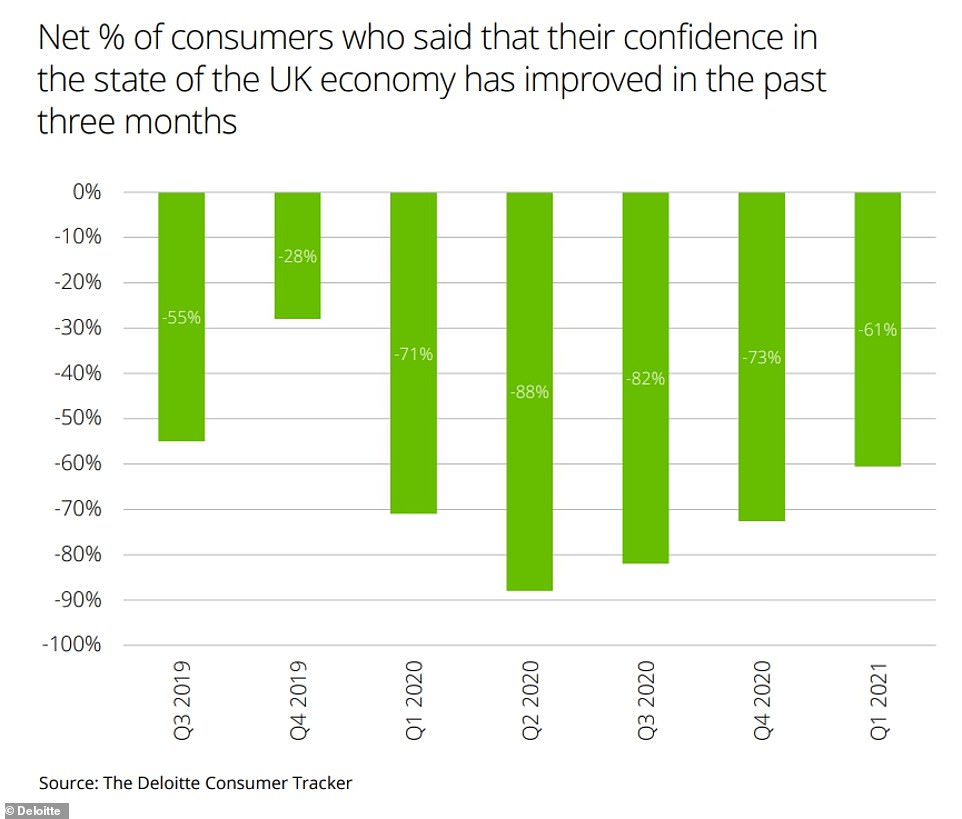 ‘These returning shoppers are looking for flexibility – we’re seeing high levels of footfall in the district in the evenings, highlighting the public’s desire to shop, dine and enjoy the West End at their convenience.’

Last week a separate survey found consumer confidence edged up only slightly last month amid a more guarded view of the future from households hit hard by the pandemic.

GfK’s long-running Consumer Confidence Index increased by just one point to -15 in April, after a seven-point jump last month.

Confidence in personal finances over the coming year remains strong at +10 and the poll recorded a significant rise in confidence in the general economic situation in the next 12 months, with a six-point boost in April following a 13-point increase in March and 14 points in February. 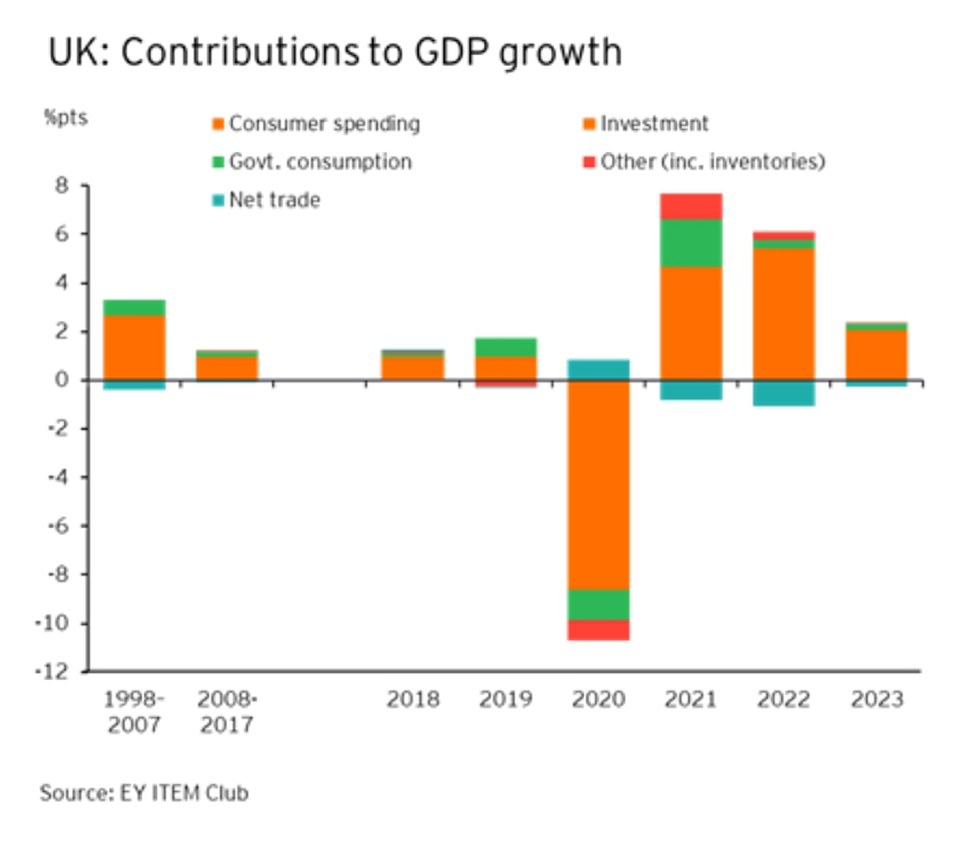 Separately, experts at EY Item Club predict Britain’s economy is on course for its best year of growth since the Second World War. Economists at the think tank have upgraded their prediction of GDP growth for 2021 from 5 per cent to 6.8 per cent 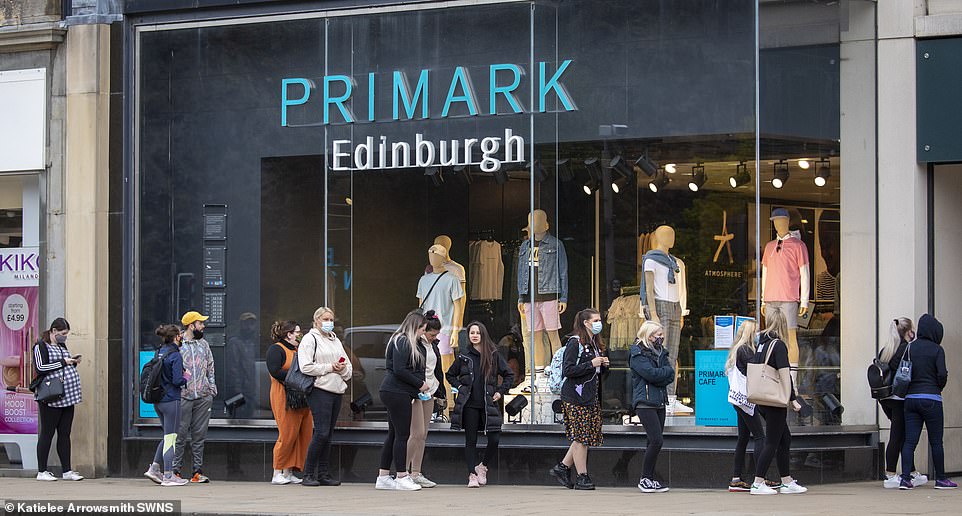 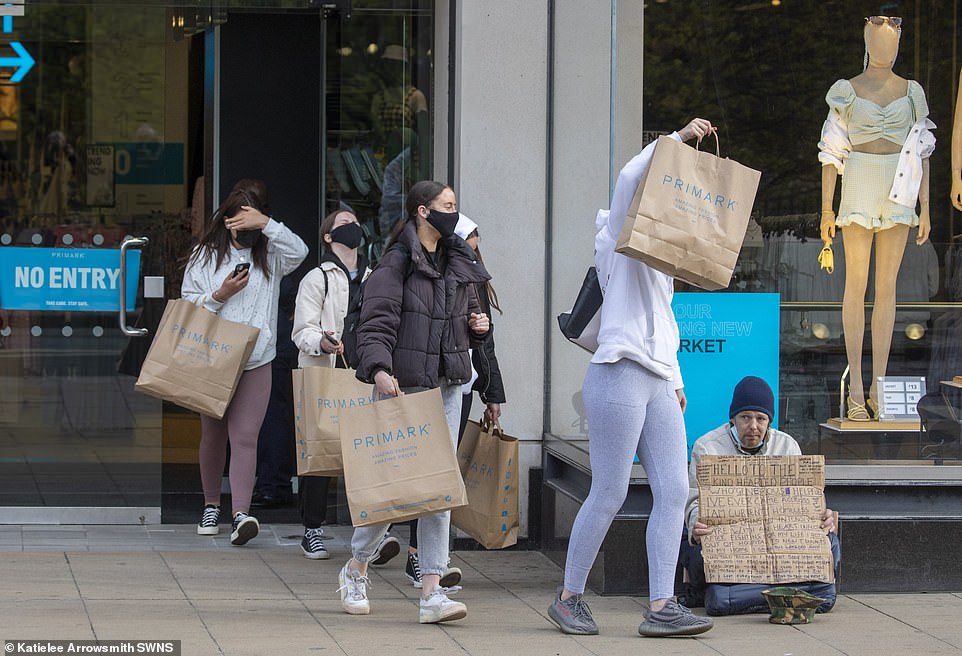 However the major purchase index, a marker of confidence in buying big ticket items, decreased by one point to -12, although it remains 40 points higher than this time last year.

Joe Staton, client strategy director at GfK, said: ‘Confidence has edged up one point in April with consumers taking a more guarded view on the future. This clear trend of growing confidence reflects the forecast of a rebound for our economy during the second half of the year.

‘The improvement in the consumer mood since January is welcome but the pandemic has hit household finances hard and, on the road ahead, we will still see concerns over new variants, rising inflation and the debt overhang.

‘Nevertheless, there’s every chance that as the recovery gains momentum and the numbers get stronger, confident consumers will continue to spend and drive the wheels of UK finances into the summer and beyond.’