Shot in her father’s arms, seven-year-old the youngest victim of ‘crackdown on anarchy’

Singapore: Of all the tales of brutality and heartache emanating out of Myanmar over the past seven weeks, few could be more shocking than that of Ma Khin Myo Chit.

Only seven years old, she was reportedly killed during a raid by security forces on her family’s home in Mandalay, the country’s second largest city, on Tuesday night.

More than 270 people have died during a murderous crackdown by the new military regime since it took power in a coup on February 1. Among them there have been many children given young people are at the centre of the pro-democracy uprising.

Ma (Miss) Khin Myo Chit, however, is the youngest. 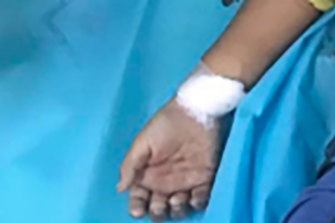 Seven-year-old Ma Khin Myo Chit lies on a table. She was killed at home, in Mandalay, Myanmar, by security forces.

A photograph of her body and the gunshot wound to the abdomen that ended her life was published in news outlets in Myanmar on Wednesday. This masthead declined to publish the shocking images.

Her sister told news site Myanmar Now that had Khin had been shot while sitting in the arms of her father Maung Bo after soldiers burst into their house in the Mandalay township of Chanmyathazi.

The sister also said her 19-year-old brother had been hit with a pistol and taken away.

Khin’s death was also reported by news agency Reuters and another Myanmar outlet, The Irrawaddy. The Irrawaddy said there had been no protests taking place in that district at the time and police and military personnel had been shooting people at random on the street and storming residences.

Save the Children said in a statement that at least 20 children have been killed in the country since the generals reclaimed power, overthrowing Aung San Suu Kyi’s elected National League of Democracy party. It said it was horrified at the “complete disregard for human life by security forces”.

Myanmar’s military spokesman, Brigadier General Zaw Min Tun, said in a news conference in the capital Naypyidaw that he was sorry about those who had been killed but noted five police and four soldiers had also died.

“I am sad because these violent terrorist people who died are our nationals,” he said.

“We have to crack down on the anarchy. Which countries in the world accept anarchy?”

After weeks of bloodshed the streets emptied out on Wednesday when protesters across the nation took part in a silent strike. The Irrawaddy said residents were showing solidarity against the regime by staying indoors and closing their businesses.

On Wednesday afternoon, state TV said about 600 protesters had been released from prison. AP reported witness outside Insein Prison in Yangon saw busloads of mostly young people leaving the compound “looking happy”. AP said one of its journalists, Thein Zaw, had also been released.

The Sydney academic had already been accused on state media of trying to leave the country with government financial documents, an allegation his friends say is trumped up, but if charged and found guilty under the colonial-era Burma Official Secrets Act he could face a prison term.

Turnell has been in custody since February 6 and was earlier this month permitted to talk on the phone to his wife Ha Vu in Sydney for the first time since being held.

“We have allowed Sean Turnell to speak to his family on the phone twice, and will allow him more,” the military spokesman said.

Two other Australians, Matthew O’Kane and Christa Avery, who is Canadian-Australian, have also been placed under home detention since trying to leave on a relief flight from the main city Yangon last Friday.

They run a business consultancy and conduct aid work in Myanmar. It is not clear why they were not permitted to board a plane.

Suu Kyi, who has been under house arrest since the morning of the coup, was due to appear by video link in court on Wednesday but internet problems again pushed the hearing to April 1. She faces multiple charges including illegal possession of six walkie-talkies, inciting unrest and breaching COVID-19 protocols.

Her lawyer Khin Maung Zaw, who has been unable to speak to her and was not even allowed inside the court at her last appearance on March 1, has said he fears she may not get a fair trial.