Skydivers' plane goes into freefall and spins past them at 16,000ft

Moment skydivers’ plane goes into freefall and spins past them after engine stalls at 16,000ft as they leap out in South Africa

Extraordinary footage shows the moment skydivers narrowly avoided being hit in mid-air by their plane as it spun out of control seconds after they jumped from it.

The dramatic moment was filmed by videographer Bernard Janse van Rensburg as a group of skydivers jump from the aircraft over Mosselbay, South Africa, on Thursday, October 14.

As they jump, the plane stalls 16,000ft in the air, its twin propellers stop and it spins out of control before plummeting towards the ground, narrowly avoiding a major collision with the falling sky divers who are preparing to join up in formation.

The pilot managed to regain control of the aircraft and landed it safely. 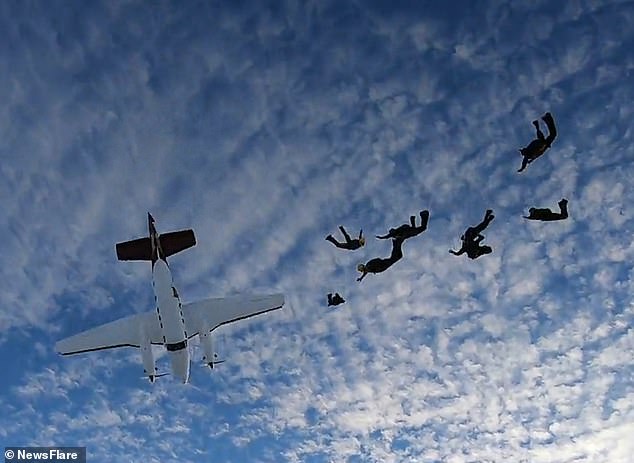 Dramatic footage shows the moment a stalled aircraft almost collides with skydivers shortly after they jumped from it over Mosselbay, in South Africa, on October 14

The clip, filmed by a videographer with the skilled skydiving team, shows the group preparing to jump from the plane.

One skydiver opens the door and the team gets into position to carry out the skydive formation.

After a few moments, Mr van Rensburg moves onto the tail of the aircraft as other skydivers start making their way out.

Initially, eight divers and the videographer jump from the aircraft which instantly starts to go out of control and its twin propellers can be seen stopping.

As the skydivers begin plummeting to the ground, the plane starts nosediving and spinning around in circles.

It falls below the divers before levelling off directly underneath three members of the team who appear to be falling towards its path. 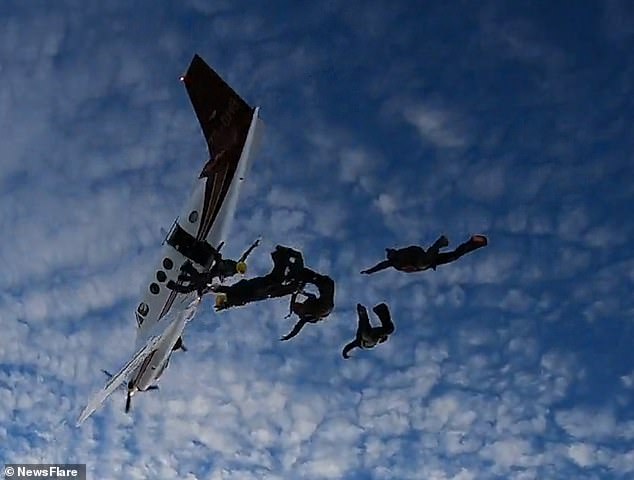 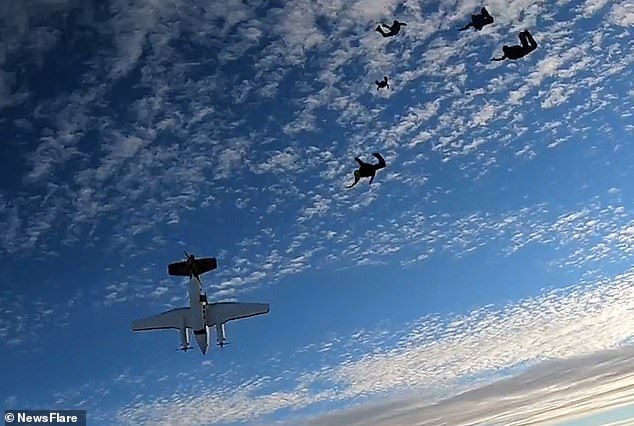 Moments after the skydivers jumped out, the aircraft stalled and began freefalling and spinning before the pilot managed to bring it under control and land it safely

Fortunately a midair collision is avoided, but the aircraft continues falling and spinning away from the videographer’s view.

As it rocks from side to side, another skydiver is seen jumping from the aircraft before it is eventually brought back under control and flown away from danger.

As the footage continues, Mr van Rensburg manages to relocate the eight skydivers and positions himself alongside them as they carry out their midair stunt.

The team grab hands and create a circle as the videographer looks down at them from above as they fall through the clouds.

After a few seconds, they release their hands, spin off in different directions and pull their parachutes for the final part of their descent.

Mr van Rensburg said the Beechcraft C90 King Air aircraft the team had been flown in stalled midair, causing it to lose control.

He said the team missed the ‘tell-tale signs’ of the imminent stall as they were too focused on getting their positioning and timings right for the formation.

He said: ‘From the videographer exit position (outside, most tail-ward end of the jumper line) I felt the plane ‘slip’ once and then twice after which I knew something was wrong and decided to let go of the now banking aircraft.

‘This all happened inside of just a few seconds.

Nine people jumped from the aircraft but Mr van Rensburg said there were still five skydivers inside of the aircraft when it lost control.

‘The moment was surreal and I could not believe what I was seeing,’ he added.

‘Everything happened in slow-motion and I remember thinking: “Am I really seeing the plane spinning nose down next to us?” ‘ 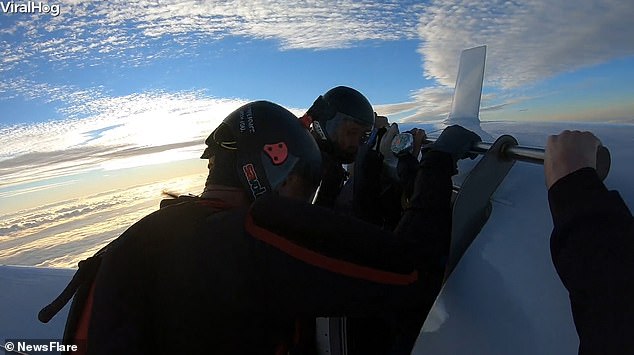 He added: ‘After the spin, the aircraft started to veer underneath us but luckily did not make contact.

‘As the aircraft started to recover from the stall (still unstable) one further skydiver exited, leaving four skydivers and the pilot in the aircraft.

‘After I was satisfied that the aircraft had recovered, I searched the sky for my team and found them building the pre-planned formations in a safe and normal manner.’

The aircraft returned and landed safely on the runway, according Mr van Rensburg.

The incident was also reported to the South African CAA and PASA national safety and training officer.

Mr van Rensburg added: ‘The next day the jump team made adjustments to their exit procedure following discussion with the pilot and no further incidents or near-incidents were experienced.’