Sleepless nights and ‘complete despair’ for safety of family in Afghanistan

Sydney’s Afghan community have had sleepless nights worrying about friends and family, with some making anxious efforts over the weekend to help loved ones flee Kabul where the Taliban flag now flies above the Presidential Palace.

Sayed Hussainizada said his daughter-in-law scrambled to get out of Afghanistan’s capital on Saturday after her original flight to Sydney via Dubai was cancelled. The family had to pay an extra $5000 to get her a business class flight after her economy class ticket was cancelled. She arrived in Sydney on Sunday night and is in hotel quarantine. 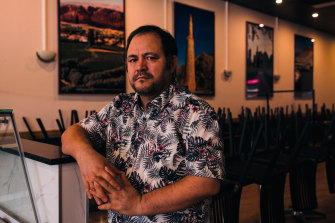 Sayed Hussainizada an Australian Hazara, Afghani in his family restaurant in Campbelltown.Credit:James Brickwood

Mr Hussainizada, 50, who arrived in Australia as a refugee 21 years ago, said he barely slept on Sunday night because he was worried about the safety of friends and family. Mr Hussainizada, who is the founder and president of the Afghan Fajar Association and works in a family restaurant in Campbelltown, is part of the religious and ethnic minority Shia Hazara community who have faced persecution by the Taliban in Afghanistan.

“We are worried about dark days in our history coming back,” he said.

Sydney lawyer and human rights advocate Mariam Veiszadeh, who was born in Kabul and arrived in Australia at the age of seven with her parents and older brother in 1990, said she spent Sunday night “watching this human tragedy unfold”. She said Australia should be rescuing more vulnerable people and providing humanitarian aid.

“It’s really hard to watch and feel helpless and a sense of frustration that Western countries, including Australia, should be and could be doing more,” she said. “I’m really fearful for what is to come.

“While many of us are shocked at the speed in which the Taliban were able to take hold of the country in little less than a week, few are surprised that Afghanistan is now yet again in this situation after decades of foreign intervention by countries who have a track record for meddling in the Middle East for political gain.

“As an Afghan Australian, my heart is in my mouth as I watch on in complete despair. The final nail in the coffin was seeing images emerge of Taliban members perched in Kabul’s presidential palace.” 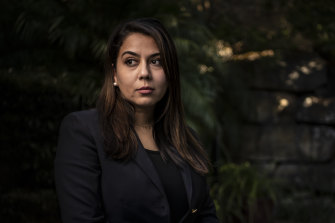 Wahid Ezaty, 44, an engineer from Ryde, who arrived in Australia from Kabul as a refugee with his mother and sister 30 years ago, is worried about family members who are stuck in Afghanistan.

“I am very worried about their safety, but hopeful that the transfer of power is as bloodless as possible and that people can be spared,” he said. “They are very nervous and want to get out given the opportunity, but that is almost impossible at the moment. They can’t go anywhere because the airport is shut and most of the shops are shut and neighbouring countries have pretty much closed their borders.”

He said he was disappointed Australia had not provided refuge to a greater number of people from Afghanistan at a time when Canada was rescuing thousands of people from the country.

“There are about a quarter of million people who are internally displaced in Kabul alone and more in the provinces who have lost everything and are fearing their lives being lost. I would urge the Australian government and NGOs to provide immediate humanitarian assistance,” Mr Ezaty said.

A 39-year-old Hazara man from Afghanistan, who lives in Canberra after arriving in Australia in 2004 as a refugee left the Jaghori district in southern Afghanistan, is another worried about friends and family in Afghanistan. He did not want his name published to protect the safety of his family.

“My worry is not just about my extended family, it is about the whole Hazara community which were victims of ethnic cleansing by the Taliban in the 1990s,” he said.

“I was speaking to my friends and the Taliban has already started committing atrocities against the Hazaras. My fear is once the attention starts fading away from Afghanistan that they will be settling old scores. They have already started taking teenage girls from Malistan district in the Ghazni Province.”